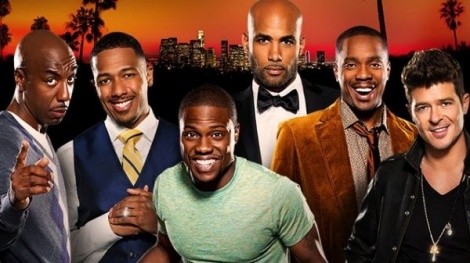 The Real Husbands of Hollywood (BET) Series Debut: The comedy-gangsta dream team of Kevin Hart, J.B. Smoove, Nick Cannon and Robin Thicke (?) comes together to piss on the Real Housewives, Hollywood, self-absorbed stars and whatever else strays into their path. ---Not really sure how long they can sustain the pilot’s level of funny, but anything with J.B. Smoove is solid gold.

The Bad Girls Club (Oxygen) Season Premiere: Would you believe … Season 10? This time around, a whole new set of mentally-unbalanced skanks are set loose in Atlanta. Have they learned from the past nine seasons that shit always gets real at the nightclub? Or that alcohol and psychotic levels of unchecked rage just don’t mix? Bitch, please …

Justified (FX) Free, tonight at Brewvies Cinema Pub (677 S. 200 West, 21+), 8 p.m., one of the absolute best shows on television—you should really be there. Tonight’s screening is the only one of 13 episodes that won’t be shown on the big screen in the theater due to a prior booking—but it’s still free (in the bar), and it’s still that damned good. Just sayin.’