Concert Review: The Singers from Twenty Feet From Stardom

I don’t go to church, but I imagine that when church works at its deepest and most meaningful levels, it feels something like last night’s performance by the five back-up singers of Twenty Feet From Stardom at the Sundance House.---

At one point or another during the evening, as the odd foot-stomping, hand-clapping white guy who somehow managed to score a front row seat, I made eye contact with every member of the special-occasion band, where upon they smiled wide back at me -- because, I believe, they knew that they were touching me (and the 300 or so people behind me). For these selfless harmonizers who’ve spent their careers supporting leading ladies, it is all about that connection -- to the audience and to each other.

During Twenty Feet From Stardom, a documentary directed by Morgan Neville (read a feature and review here), the women talk about “The Blend,” when the singers harmonize -- but it’s more than just that. Neville describes it as, “the Holy Grail of back-up singing. 'The Blend’ becomes this quasi-religious place where people completely lose themselves in a single harmonic voice.” Last night, it was all about “The Blend.”

The film, like this performance, showcased African-American voices coming out of the church, bringing that aesthetic to pop music. Each of these singers -- Darlene Love, Merry Clayton, Tata Vega, Lisa Fischer and Judith Hill -- represent a different era in the history of popular music, and the songs of those eras -- many of them each singer helped make famous -- served as the backbone of the evening.

Each singer had their turn to shine, which they certainly did, but it was with humility, grace and the support of the others. At one point, Love said, “They do what they do, and I do not feel threatened by that. We don’t try to do that. I’m not going to do what Tata does, and I’m certainly not going to try to do what Merry does,” she said, laughing. “We support each other, and that’s what the film is all about.” When one artist would break out, the “Go on"s and “Get it"s and “Yes, sister"s whispered by the others could be heard faintly, but with an encouraging power.

Vega started the evening off with a rousing, spirited take of “Speak to Me Lord (Maybe God's Trying to Tell You Something).” At this point, it was one of the five times that I almost came to tears, pulled into the music from my heart.

Hill, the most contemporary singer on the stage, then followed with a moving tune, backed by a tight rhythm section, which consisted of her father T.B. Hill on bass and Bill Maxwell on drums. The backing band was rounded out by Bill Cantos on piano. 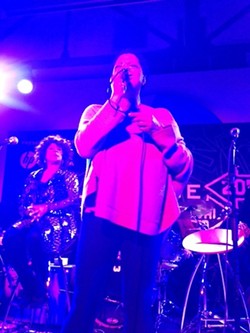 Before the shy and evocative Fischer came out of the half-light to take center stage, she crept to the mic, closed her eyes and said a prayer. The audience was hushed by the other singers and sat still and calm before Fischer broke out with her smokey, velvety voice, like -- as she described in the film -- a feather that someone blew and just said, “Go.”

Then came a poppy pick-me-up with Love singing “Da Do Run Run,” a tune she ghost sang for The Crystals in 1963. It livened the crowd up before Clayton sang Bob Dylan’s “These Times Are A Changin’” followed by an original from Hill, “Desperation.”

One of the highlights of the evening, and what brought the crowd to its feet for the first time, was Vega’s roaring take on James Brown’s "It's a Man's Man's Man's World,” which came out like a dagger sent from the divine. When the audience cheered wildly, Vega didn’t know how to respond other than mouth, “Oh, my,” cover her mouth with her hand, close her eyes and give the audience a slight bow.

When Love followed, she did so by acknowledging the emotion and power of the last song before bringing back the oldies on “Today I Met The Boy I’m Going to Marry.”

If the stage weren’t filled with enough talent already, out came Pearl Jam lead guitarist Mike McCready to play the role of Keith Richards on one of the finest showcases of back-up singing in the history of rock & roll, a performance by Clayton on “Gimme Shelter.” Again, the song and the moment and the context nearly tipped my tear ducts. At set's end, the crowd was on their feet, clapping hands and beaming as they should be, anticipating the encore that almost didn't happen.

Clayton, the first to come back onstage, said that everyone’s voice was shot. But the diva persisted and said that she wanted to do one last song dedicated to the late Gil Friesen, who passed away during the making of this film. Fischer came out next, then the backing band, as Clayton started up “Lean On Me.” Vega and Hill joined, and with the audience performing as a 300-person choir for the women, during the last chorus, Clayton brought director Morgan Neville onstage. It was a perfect full-circle of a way to end the evening.