Going to see Courtney Love last night at the Star Bar in Park City as part of its Sundance music events, I was half expecting to see a washed-up mess, the Courtney Love of the joking stereotypes. But throughout the evening, she did much to make me dismissive of such a thing.---

After local openers New City Skyline, Love made a grand entrance to the strains of Ravel’s ‘Bolero’ and took on the question head on—playing a few verses of Neil Young’s "My My, Hey Hey" ("It’s better to burn out than fade away"). Then, throughout the rest of the evening demonstrated that she’s done neither.

In a set consisting almost completely of '90s-era Hole songs, she galvanized the audience and reminded us of the power of rock music, making any pondering of her as "burn out" evaporate into thin air. For the film-festival crowd, her first official performance since touring the album Nobody’s Daughter with Hole in 2010 and announcing the breakup of the reunited version of Hole last October firmly re-established her as a solo musician, though the most recent incarnation of the band was her backup. It’s the Courtney Love show, with whichever other musicians are in tow. "Skinny Little Bitch" from Nobody’s Daughter had the audience singing along, as did "Miss World."

All the old nuggets worked their magic, but the biggest surprise of the night was her "experiment" -- adding acoustic chord backing to Jay-Z’s "99 Problems," changing the title of the song to "99 Problems But Being a Bitch Ain’t One" and thus taking on another of her lingering epithets. And her repetition of the line, "ain’t nothing sweet bout how I hold my gun" throughout the night, relishing the words, was especially provocative. In a moment of histrionics, she later said she wanted to say hello to any members of her "fucked-up family" in attendance.

With Love's rock & roll prowess on display in spades, the other highlight of the evening was "Northern Star," accompanied on acoustic guitar by Hole guitarist Micko Larkin, the pain re-emerging as she raised her voice to a scream on some of the lyrics. "I wait, praying to the North star/I’m afraid it won’t lead you very far." Amidst the chill of winter in the mountains, her vulnerability and fearlessness was stirring. 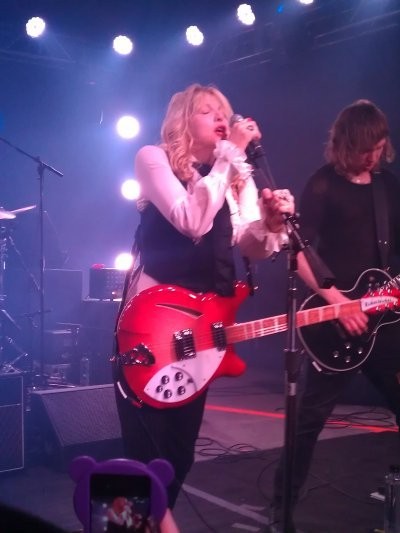 "Malibu" was also very moving. Grunge was largely about the loud-soft-loud dynamic, and Love evidenced an emotional dynamic that, rather than being the roller coaster one might expect, was controlled and powerful. Some grunge music has aged better than others, but these songs still conveyed the same incandescence as when they were written. She began the show in a smart pant suit, returning for the encores in a black negligee, playing with feminine stereotypes as she’s done throughout her career, whether you see the way she does it as shtick or a sophisticated form of performance art.

Before a second quick encore, the show was book-ended by a cover of "Thirteen" by Big Star, in which the line "Rock & roll is here to stay" reiterated the sentiment of Neil Young ("Hey hey, my my, rock & roll will never die") in the show’s opener. It certainly emphasized the point that Love doesn’t seem about to slow down her pursuit of making rock & roll music that’s still vital and meaningful any time soon.