Because everything has a price tag on it, SugarDaddie.com is claiming to have offered the neighborhood of Sugar House $1.35 million to change its name to SugarDaddie.com, U.S.A. ---

In celebration of the website's 10th anniversary (and to get reporters to herd you there), SugarDaddie.com's PR firm sent out a press release Wednesday afternoon outlining the "lucrative deal."  In exchange for a little over "one million dollars," SugarDaddie.com is asking for:

- A 10-year commitment to the name change, as well as altering all official government correspondence, institutions and street signs.

- The streetcar currently in development will be known as the SugarDaddie Streetcar.

- All city marketing resources must be made to reflect the city’s official new name and must be fully implemented within six months.

- The CEO of SugarDaddie.com must receive a key to the city in a formal ceremony presented by local government officials (open to the media and the public).

Really? A key-to-the-city ceremony? $1.35 million wouldn't even pay for renaming the street signs. Obviously, the offer is to generate buzz for the website, rather than purchasing naming rights. Based on this list of demands, I wouldn't be surprised if the CEO of SugarDaddie.com wanted District 7 councilman Soren Simonsen to "Kneel before Zod."

Thankfully, the offer isn't being taken seriously by anyone. “It’s a ruse, we haven't seen an official offer from them," said Art Raymond, Salt Lake City deputy director of communications, "and if we did, the brand of Sugar House and the streetcar is not for sale. It appears to be a publicity stunt and we would not consider it."

But SugarDaddie.com is apparently willing to play ball. In fact, earlier this year, the mayor of of Sugar Land, Texas, declined a final offer from the website of $4.65 million.

"My job is to keep the story interesting," said Darren Shuster of SugarDaddie.com's PR firm, Pop Culture PR, "This is the beginning of a negotiation -- we have to start with something. I’m willing to negotiate."

The mayor's office and SugarDaddie.com had the following exchange via Twitter late Thursday. It appears the $1.35 million offer has been declined... 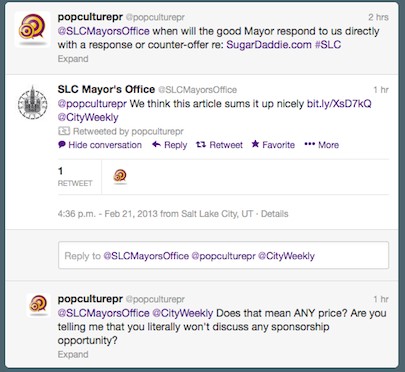