Continuing its so-far impressive season, Plan-B Theatre will break out its latest production, Eric(a), this week. --- The story focuses on Eric, who used to be Erica, in an exploration about gender-switching and the struggles that come with life, centered around the experience the character has the first time he falls for a woman in this one-act solo performance.

Today, I chat with playwright Matthew Ivan Bennett, director Jerry Rapier and the play's leading actress, Teresa Sanderson, about the production leading into opening night this Wednesday. (All pictures by Rick Pollock, courtesy of Plan-B Theatre.) 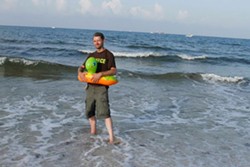 Matthew: I grew up in the suburbs of Salt Lake City, which, in retrospect, feels stereotypically innocent. I sold lemonade from my front yard, played games of Kick-The-Can with neighbors until dark and never felt unsafe. The first time I ever recall being confronted with transgender issues was in an episode of WKRP In Cincinnati: Herb met up with an old friend who had become a woman. As a kid, I had no reference point for this at all — in fact, I may have been surprised that sex-change operations even existed. The "moral" of the episode was that even though Herb's friend had changed on the outside, she was essentially the same person. I only saw that episode once, but I think about it from time to time.

Jerry: I've been with Plan-B Theatre for 13 seasons, and a father for three months. Not sure which has taken more energy!

Teresa: I have been doing theater forever. My first show for Plan-B Theatre was way back in 1992. I am on the boards of the Davis Arts Council and Pygmalion Theatre Company.

Gavin: What have all of you been doing in local theater over the past year?

Matthew: The same as always: writing and rewriting. Earlier in Plan-B's season, I had my fourth Radio Hour produced -- Sherlock Holmes & The Blue Carbuncle; Eric(a) and a comedy called A Night With The Family that's opening at Pygmalion Theatre Company in May after a run in Omaha in April.

Jerry: In 2012, I directed The Third Crossing, the Script-In-Hand Series reading of 8 and the revival of Hedwig And The Angry Inch for Plan-B, and The Adding Machine and Geography Club for the University of Utah.

Gavin: Matt, how did the idea for Eric(a) come about, and what was the writing process like?

Matthew: The character of Eric probably arose from thinking about the basic dilemma of dating as a trans person: At what point do you tell someone that you're trans? At least, the character arose from that dilemma insofar as the play is a love story. The other big component of the play is answering the question: What does it mean to be a man? When I began talking to trans men, I found that I -- as a cisgender man -- had far more in common with them than I ever considered.

Gavin: How different was it for you writing a solo play?

Matthew: The main technical difference is that you have to have use prose to set the scene — much like in a novel. It was challenging and fun to use words that way. The main artistic difference between writing dialogue and a super-long monologue is that, while writing, every character in the play is filtered except the main character. There's only one point of view, the main character's point of view, so when you're writing you're always weighing the other characters through the main character. It's mentally very different than writing dialogue, where you flit back and forth between points of view. The whole writing experience is more interior.

Gavin: How has it been for the three of you working together again to put the play into production?

Matthew: We have worked together a lot over the past six years. I keep on saying this, but this play feels less like my artistic child and more like my artistic brother. Jerry's critical input and Teresa's insights combined with the help of trans friends have turned the play into something far beyond "my" idea.

Jerry: I trust both Matt and Teresa implicitly and seek out opportunities to work with both of them -- at the same time, as much as possible.

Teresa: I love working with Matt and Jerry. We have done it a lot now. But when Matt watches rehearsal I still get nervous.

Gavin: Teresa, when did you first read play and what were your thoughts on it? And how did you end up playing the role?

Teresa: This character was in another play Matt wrote called What Are You? He spoke to me immediately. When What Are You? imploded, I was thrilled to hear Eric was going to get his very own play. This role found me.

Matthew: The role was created for her! 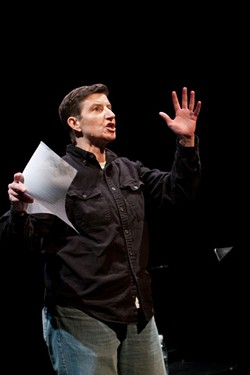 Gavin: How different is it for you performing Eric(a) alone without a cast to work off of, and essentially doing an hour-long monologue for the audience?

Teresa: I had no idea how hard it would be. I LOVE working with other actors; the energy you get and give is one of the things I love about what we do. Now, I create the energy, every beat, every breath, every story. It's a little overwhelming.

Gavin: Considering the character you're portraying and the gender issues involved, how has it been for you bringing this character to life?

Teresa: I have always been fascinated by transgender issue. We all have those moments when we wonder what it would be like to be the opposite gender, but to feel trapped in the wrong body has got to be one of the most intense, confusing situations I can think of. Mostly, I want people to see what a charming, intelligent, warm human the character of Eric is.

Matthew: I am very, very, very eager to gauge the audience's feeling of being a part of the play. We've worked toward building a piece that, I think, asks you to mentally participate on a deeper level than an ordinary play. Eric(a) invites you deeply into the trans experience — maybe more deeply than could be accomplished with an ordinary play. I'm excited to see how many wheels can be turned that perhaps haven't been turned before.

Jerry: Matt's best work plus Teresa's best work equals a night of theater not to be missed.

Teresa: I hope I can do this!

Matthew: I'm hoping to get a play called The Cause onstage. It's a drama about Harriet Tubman, John Brown and the abolitionist movement right before the Civil War.

Jerry: A couple of Script-In-Hand Series readings this summer and a fascinating drama in the fall, all for Plan-B, and all a little too early to announce!

Teresa: A Night With The Family at Pygmalion.

Matthew: I would like to plug Teresa Sanderson in my play. Come see her. She's brilliant.