I interviewed the guy who invented eCards; he regrets nothing | Buzz Blog

I interviewed the guy who invented eCards; he regrets nothing

When it comes to “unsubscribing” from people on Facebook, I’m like the Dave Chappelle of block parties. It doesn't matter if we sat next to each other in homeroom or you just gave me a fresh kidney; if you post ambiguous complaints about your boyfriend-- boom, you’re outta here. ---Oh, look: 220 photos from the Festival of Colors -- you’re dead to me. How about a game of Farmville? Poof, your shit is ghost.

Unsubscribing from annoying friends is your right; to me, it’s my quest. But, the number-one way to get Mutombo’d from my newsfeed is by indiscriminate and gratuitous sharing of those lighthearted and topical eCards. You know which ones I’m talking about: the pastel shaded, old-timey pictures with the snappy and snarky jokes…

They’re called Someecards, and to be fair, most of them are kinda funny -- maybe not Eddie Murphy Raw funny, but at the very least, Daddy Daycare funny. However, the issue here isn’t their comedic value. The real problem is over-saturation. They’re literally everywhere you look, all day, every day. Like those “Stay Calm, blah blah blah,” posts, what we’re dealing with here is a meme that refuses to die and at this point shows no signs of stopping.

In a single month, Someecards averages over 30 million shared cards on Facebook alone. That’s 30 million people blanketing the Internet with other people’s jokes. Sure, these are probably the same friends who say “amazeballs” and “cha cha cha,” in between verses of the birthday song, but nonetheless, that’s 30 million people! Which means these things are everywhere.

I decided that if I wanted to find out if  these eCards really do have the staying power of a T-1000, I'd have to go straight to the source:

The guy pictured above is Someecards co-owner and CEO, Duncan Mitchell. Last week, I chatted with him via phone from his New York-based eCard fortress:

CW: Man, thanks for talking with me; you’re like the Zuckerberg of memes.

DM: Ha! No one’s ever put it that way, but I’ll take it as a compliment.

CW: First off, do you have any idea what you’ve done to my newsfeed?

DM: We have gotten some people upset that there’s too much of our stuff out there. Is that what you're referring to?

CW: I'm half-kidding but … yeah, that’s what I’m talking about. 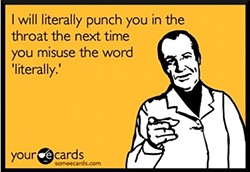 DM: Here's what happened. We obviously create a lot of cards ourselves and we hope they are smart and funny. But, we also have a "create your own card" app and thousands of those are made every day. So, we have had some people complain that their Facebook feed is filled with our cards, that there are grammatical errors, make it stop, make it stop. I think every so often there’s a group of people that kind of go rogue on the user-card app and fill up their friend’s  feeds to the point where it drives them crazy.

CW: Yeah, but people love these things.You know, I bet the first question interviewers ask you is, “How do you come up with those crazy drawings?

DM: Um, yeah, people ask about he creative process, for sure. We have a few full-time writers in the office every day working on cards. We actually have three types of cards: there are the user cards, the regular cards and then there are the branded cards, where we work with big corporations, like Ford and Coke. Our writers come up with two-to-four new cards a day that are just purely from us.

DM: Yeah, but they do a lot of other work. So, they monitor user-card stuff and they're promoting cards on Facebook and on Twitter. They’re actually writing maybe 10 cards a day and we’re picking two that we think are amazing. Plus, they have to work with a designer and pick an image, upload it on the CMS and promote it. So, there’s a lot of work that goes around it.

CW: It must be tough to be the CEO of Someecards because I bet people expect you to be funny all the time.

DM: I hope not. I don't meet too many people where that’s the lead when we meet in business. Though, when you're in the comedy business, people expect you to be funny, but from what I've heard, people who are often the funniest in their careers aren't necessarily funny in person. Does that make sense?

CW: Of course, it does; I’m horrible to be around.

DM: Then you might have a future in the comedy business. 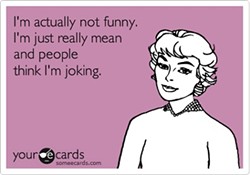 CW: So, what is the appeal of these eCards? Do you think people just love reading text on pictures?

DM: I think that may be a part of it. We try to make sure they are always based on a truth; ideally, a surprising truth. Like, you read it and you go, “That's totally me or someone I know and that's really funny; I just never thought of saying it that way.”

DM: We don’t want to waste people’s time. People's attention spans are short. But I think there’s a time and a place for reading long-form articles. We are trying to live in a different space, the in-between times while you're at work. All of our brands try to live in that space.

CW: The more I talk to you, the more I feel pressure to write a really good headline for this story.

DM: I think everyone is trying to do that. A lot of promotion happens on social media, and on most platforms all you have is a headline and a picture. That's about it. With news, if it's going to be sharable, it has to have something catchy that people will want to send around.

CW: Are there any memes that you just can’t stand?

DM: You know, a lot of people call eCards a meme, but we don’t even consider it that; it's just kind of a style that’s being used. I think it has surpassed meme status, but that's all right if people want to call it that. I actually don’t spend a lot of time on Facebook or getting into the meme culture; that’s sort of the writers job to pick up on the stuff. I'm running more of the business side of things, the design and functionality of the site. But, um, I find most things on the Internet annoying after awhile. But, you just kind of block it out, right?

CW: Yeah … I suppose you can just block it out.