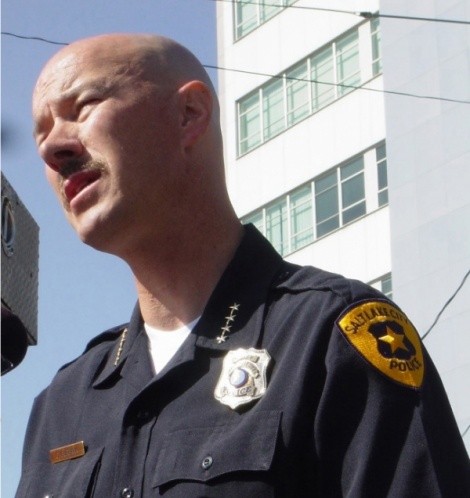 Earlier this week, the Boston Marathon was hit by a pair of fatal explosions. Another kind of explosion followed the terrorism as news accounts and social media exploded with information, misinformation, and concerns and questions about the attack. Following a deluge of questions about Salt Lake City’s weekend marathon, the police have set up a tipline for the event and marathon organizers have beefed up security. Salt Lake City Police don’t really consider the race a target, which begs the question—is this just the world we live in now?---

Since Monday’s bombing in Boston, which injured more than 100 people and took three lives, the Salt Lake City Police Department was inundated with calls from media about the safety of Salt Lake Marathon. Salt Lake City Police Chief Chris Burbank (pictured) held a press conference Monday about working collaboratively with the organizers of the Salt Lake Marathon to enhance security. On Tuesday, April 16, police began publicizing the “see something, say something” campaign, calling on the public to keep their eyes open for suspicious activity and to e-mail photos and tips to a special slcmarathon@slcgov.com e-mail account made just for the event.

Salt Lake City Police Detective Dennis McGowan acknowledges that police don’t really expect the marathon to be targeted for any reason. He also recognizes that asking the public to be on the lookout for suspicious people can be troublesome.

“It’s kind of tough because it borders on profiling people,” McGowan says. “But at the same time, you want to try to protect yourself and other members of the community. If you notify the police on a hunch, then that’s not improper--that’s a signal that you’re trying to do the right thing.”

McGowan says being on the lookout means looking out for people with bags, or wearing bulky clothing, or who aren’t normally in a neighborhood. McGowan believes being alert and not canceling the event out of fear is a way the community looks after itself. “We believe the spirit in the community is such that people are not going to be turned away from this sporting event,” he says. “We’re going to respond and demonstrate to terrorists that they can’t change our way of life.”

Vigilance and caution are always wise, but it also raises the question of whether it is really a win against the evil-doers if citizens have to spend their time at the marathon looking out for terrorists instead of just enjoying the event.

Amos Guiora, University of Utah law professor and co-director of the Center for Global Justice, teaches classes on terrorism and law and even runs terrorist-attack simulations as part of his course curriculum. He says that with 60 cities having marathons this weekend, less than a week after the Boston bombing, it’s natural that police are wary. He also sees it as natural that people are agonizing now about sporting-event security, because they’ve not commonly been terrorist targets. Indeed, he says many who study terrorism wonder if the Boston attack represents a “paradigm shift” in terrorist strategy.

“I think what makes Boston such a unique event as a terrorist attack is that the marathon, and sporting events in general, for whatever reason, have been considered, 'off limits' by terrorists," Guiora says. Besides a few notable cases like a bomb set off at the 1996 Summer Olympic Games in Atlanta and the terrorist attacks of the 1972 Summer Olympic Games in Munich, terrorists have avoided sporting competitions, preferring symbolic political or religious targets.

Though Salt Lake City is an unlikely target, Guiora sees the enhanced response here and at other city marathons as appropriate. “Law enforcement will feel the need to provide enhanced security to quell public concern and also to be on the lookout for the forces of evil that are obviously out there,” he says. “But the grim reality of terrorism and counter-terrorism is that it’s just not possible to prevent all acts of terror.”

For Connor Boyack, an activist and director of the civil-liberties-focused advocacy organization the Libertas Institute, the reality of terrorism means people should not give into fear and give up their civil liberties in the process.

“Paranoia permeates our society when stuff like this happens," Boyack writes via e-mail. "9/11 goes down, so we erect a police state with the government spying on American citizens and killing thousands of innocent people half a world away. The underwear bomber happens, so TSA begins putting their hands inside everybody's pants. It's all unnecessary; it's all security theater," He doubts there will be another attack on a marathon and suggests the best way to stick it to terrorists is for people to just try to live their lives without fear. “If the point of a terrorist's actions is to instill fear, then why do people not see that the best response is the opposite of what terrorists hope to accomplish?" Boyack writes. "Act calm, behave normally and see these types of attacks for what they are: extremely infrequent and designed to instill fear.”

But for others, like professor Guiora, who in numerous travels to Israel has been in close proximity to terrorist bomb attacks, it’s possible for one to balance vigilance with living and enjoying life. Guiora, for example, will proudly be running in Saturday’s race. “I’m sure law-enforcement authorities are going to take every measure to protect all of us with the understanding that we can’t all be protected, all the time,” Guiora says. “But the underlying message must be that the race must go on.”