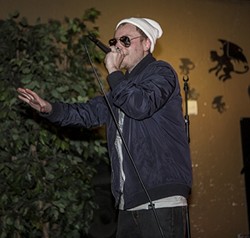 Thursday night confirmed our assumption that if you put Concise Kilgore, Burnell Washburn and DopeThought all in the same room people will show up.---

For some context, last year’s CWMA hip-hop showcase pulled in a small handful of fans. However Thursday night’s show at 5 Monkey’s raked in well over a hundred. Obviously you could toil over what exactly this means, but one thing is certain--I think we can stop saying Utah’s rap scene is under-appreciated.

I should also mention it probably helped that DJ Finale Grand held down the stage all night and Rob Clark from Rob’s Sauce was slinging 50 cent wings. Whenever you combine chicken, beer and rap music you're gonna have a good turn out, Ludacris knew about this years ago.

As for the show itself, Wasatch Renaissance emcee Burnell Washburn opened up the night. However, this was not the plan. Emerson Kennedy was actually supposed to open, but unfortunately he was involved in a car accident on the way to the show. To make matters worse, after securing a new ride to the show, that car broke down. Next year we’ll just pick up all the rappers in a rental van or maybe just have an Emerson Kennedy hologram on stand-by. No but seriously, it's too bad he couldn't make it.

Despite this unplanned scenario, Washburn’s set was entertaining and was highlighted with tracks from his April 2012 EP An Apple Day. But as much as everyone seemed to enjoy his set, apparently Washburn wasn't happy with his performance and posted this to his Facebook page Friday morning:

In all fairness, I thought his set was good--maybe not great, but definitely good. I’m more impressed with the fact that Washburn holds himself accountable for his performances. This is something rarely scene in music and I wish more artists had the wisdom to do this. It’ll be interesting to see how he performs at this Saturday’s Elevated Minds Tour at the Gallivan Center (DopeThought and Concise Kilgore are also on the bill).

After Washburn, DopeThought and his producer Worth gave it a whirl. These two surprise me every time I see them perform--mostly because they keep getting better. But this time it was because Worth showed up on crutches (apparently he ate it while doing some extreme hiking a few days ago) and was propped up in the back. Kids, that’s what’s referred to as “dedication.”

Right from the get-go DopeThought started calling out fans for being lazy--which I completely respect. If you enjoy what a musician is doing, then show ‘em. Let them know. I can’t stand hip-hop heads who go to shows and just stare at the performer. It's lame.

Anyway, after DopeThought put everyone on blast, the crowd pushed to the front and he put down a nasty performance. Without sounding like too much of a fan-boy, I’m thoroughly on board with everything coming from Worth and DopeThought right now. They are arguably the most interesting rap duo in Utah. Do people still say "daps and hugs?" because it applies in this situation.

Closing out the night was the veteran Soulspazm rapper, Concise Kilgore. I think anyone who's seen this talented fellow will agree that the Cali Agent hypeman turned emcee can hold down a set like nobody's business. I swear he owned that stage like a God-damned landlord. I felt like I owed him money. 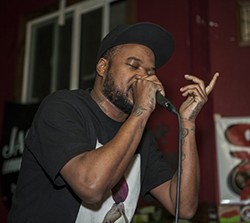 Pulling mostly from his newly released album, Kobain, which is basically one heavy banger after another, Kilgore demonstrated first hand why he’s Utah’s most respected rapper. On a side note: if you haven’t downloaded Kobain yet, you can remedy that right here. To pile on the awesome, scratch-aficionado Bo York backed-up Kilgore on the decks--which was a nice touch. Anytime you add a true turntablist to a hip-hop set, you instantly step your game up.

Yes sir, Thursday night was nothing less than big performances from Utah's nicest emcees. Despite Utah's unwarranted reputation for having a soft hip-hop scene, the people came out and it was refreshing to witness how much this community cares about it's artists, especially the rappers.

For more information on the upcoming City Weekly CWMA showcases and to vote for which artists you think should win this year’s CWMAs, check out all the details right here.