Hello to all you tear-holding, laugh-enduring, story-closing, plot point-questioning, jaw-dropping, character-loving, watching-dozens-of-season-finales enthusiasts! --- Yes, everything comes to a close on all your favorite shows ... or does it? I'm kidding; it mostly does -- except for Community, one of my favorites (don't care if it ain't yours), which shockingly is due to come back for a fifth, and probably final, season! Before I start borrowing CW's Bill Frost's material, let's move the hell on with mine and talk about some cool events. But first, here's the latest look at the 337 Memorial Wall:

The next couple of weeks are spotty on events -- they usually are, as we're headed into festival season. Speaking of, currently happening downtown in the Living Traditions Festival, which if you're not attending at least one day this year, you should be smacked. I recommend Sunday anyway, mainly because if you're into trying out the food, that is usually the best day, where they start to either experiment with the tastes to give patrons who are returning something different, or you end up with double portions from those who bought so much for the fest and now need to unload it rather than take it back and have the same dish for three weeks. Not to mention the performances you'll see that are worth checking out regardless if you're hungry or not.

Skipping to Tuesday, the next fest on the bill will be a traveling one in the form of the Domino Mexican Independent Film Tour. The two-and-half-day event will mainly be housed at the Broadway Theatre, featuring filmmakers and their works brought from Mexico to share their insights about the films on hand, as well as some lectures happening at the University of Utah. 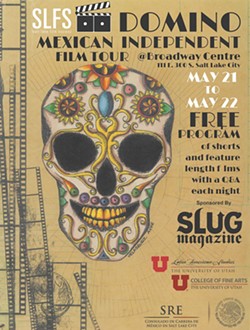 After those three days, we move along to next Saturday, where we have two events to talk about, the first being the third-year anniversary of When She Speaks I Hear The Revolution -- a milestone for any open-mic series, as is the case in Salt Lake City, where they fall apart very quickly after they've been started; you're lucky if you can find one that's gone past a year. This month, they'll be taking over JitterBug Coffee Hop for an evening of music, poetry, spoken word and other forms of performance. Check out the details at this Facebook event link.

Meanwhile, The Bboy Federation will enter the finals of its fourth season of competition next week. The nonprofit dance organization will be bringing together the top four dance crews in the state to compete at the Utah Arts Alliance's Arts Hub (663 W. 100 South) to show who is the best of the best. The evening will also feature single-dancer competitions, as well as a 3v3 Bboy Battle. Prizes and chances to go onto national competitions will be at stake, making the evening even more impressive to watch. $10 in advance via its website, $12 at the door.

Next Sunday, May 26, the Geek Show Podcast will take over Brewvies again for its monthly Movie Night. This month, they celebrate the start of summer the way all drunk college kids are portrayed to do: ROAD TRIP! Or, at least in this case, two very influential road trips in the form of Kevin Smith's Dogma and Jay & Silent Bob Strike Back. The films are totally free, but the food and drinks are not. Moving along to Thursday, May 30, City Weekly will hold its annual Miss City Weekly Pride Pageant. Dozens of drag personalities and local celebrities will be on hand to judge who is the fairest of the year. Or at least who is the most fabulous and outrageous. This event is usually a blast to watch and be a part of; come join us at Elevate for all the festivities.

Which, of course, dovetails us right into the Utah Pride Festival. I'll discuss more about this one down the road with coverage and some interviews, but be forewarned, as downtown is about to get a lot more colorful in the next couple of weeks, especially after the Pride Center relocated to its new home on 400 South, across from the Main Library. The festival kicks off Thursday evening, going all the way to June 2, with the Pride Parade and a day's worth of celebration.

As for the blog: The next couple of weeks will be very random, as I'll have some local music coverage, the latest from Gallery Stroll, a look at the latest downtown art gallery, chat with an old friend over zines, a helpful boxing organization and a new headphone company. At least, that's the plan; as always, we'll see what happens.