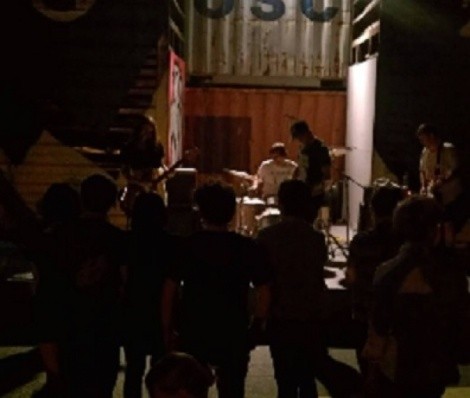 "Diabolical Records has been rattling around my head for most of my life,” says Adam Tye. “The idea is to focus on vinyls and cassettes in areas hard to find.”---

But with the closing of so many SLC records shops over the years, some may consider Tye and Boscan’s business venture a risky move. “Slowtrain [a now defunct Salt Lake City record shop] was doing great business when they decided to close, and while we'll specialize in different genres, that is the hole we're looking to fill,” says Tye. “I love Graywhale, Raunch and Randy's, but I definitely feel there's a market in Salt Lake for another record store.”

For now, the shop exists in a small storage container, but Tye and Boscan hope to eventually move to a more permanent location somewhere in the Granary District.

Granary Row is run by Kentlands Initiative, a community-based organization focusing on neighborhood development and urbanism that works to revitalize the area with small businesses by helping them develop until they are able to relocate to empty buildings in the Granary District.

Tye also commends the Salt Lake community for being so eager to help get Diabolical started. “From friends helping us get everything set up to people helping us book concerts for the weekends -- that spirit of community is what I love so much about Salt Lake City, and what makes us believe our store will be successful.”

Tye outside of Diabolical at Granary Row.

The genres carried at Diabolical Records include garage rock, psychedelic, local bands and experimental music, with a focus on the labels Burger, Dirtnap, HoZac, Night People, Siltbreeze and Woodsist. Diabolical also has a selection of used records and cassettes.

To set itself apart from being just another record store, Diabolical will host live music with Diabolical Records Presents, a musical showcase on the main stage at Granary Row. The concert series will mostly focus on local bands, but will also feature touring bands, as well.

“Our vision is to place Salt Lake City on the map as a unique place to purchase limited-release records, Tye says, "and as a musical hub where lesser known artists will play to the biggest audiences outside of their home towns.”