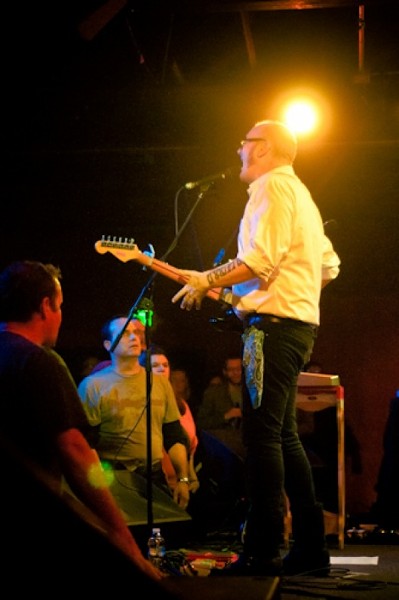 Soul Coughing was one of the quintessential indie bands of the 1990s, before indie rock was even a thing. The self-proclaimed “deep slacker jazz” four-piece broke up in 2000, dashing the hopes of those who discovered them a little too late—or so we thought.---Thirteen years and one musical redesign later, former lead singer Mike Doughty is on tour, promoting his album Circles Super Bon Bon … and graced The Urban Lounge stage on Wednesday night with a fresh new band. What more could a nostalgic millennial ask for?

To be clear: This is not Soul Coughing. Doughty plays with “Indiana” Pete Wilhoit, an American drummer from British band Fiction Plane, and bassist/keyboardist Catherine Popper, formerly of Grace Potter & the Nocturnals. The set is comprised of Soul Coughing songs, but the tracks have evolved to become more experimental, drawing on hip-hop, house and funk.

As long as we’re discussing innovation, we can’t let another paragraph go by without mentioning the opening band. By 8:30 pm, Brooklyn trio Moon Hooch was blowing up the venue. Moon Hooch is made up of two saxophonists and a drummer. Doughty discovered them in a subway station in New York City, meaning you can tell your mom that quitting your job to busk is totally a viable career option.

Moon Hooch’s jazz is almost feral. Saxophonists Wenzl McGowen and Mike Wilbur swap melody and bass parts seamlessly, while drummer James Muschler underscores this sleight of hand with rhythms that seem to belong equally to jazz and contemporary electronica. I highly recommend giving Moon Hooch a listen. I was particularly impressed by their final song of the night, “Number 10.”

Moon Hooch also did a great job of warming up the crowd. By the opening bars of Doughty’s set-starter, “Is Chicago, Is Not Chicago,” the audience was in high spirits.

Doughty’s voice still sounds almost exactly like it does on the Soul Coughing albums: clear, steady and a bit nasal. The new versions of the songs seem stripped-down and elegant, with the guitar lines sweet and bright against the rich darkness of Popper’s stand-up bass. This simplicity provides a backdrop for Doughty’s exploration of sampling, a hallmark of Soul Coughing from the early days. During “Screenwriter’s Blues,” the simplicity of the music allowed Doughty’s brilliant lyricism, which can sound equally like spoken-word poetry or theatrical monologue, to shine.

Most of the songs played came from Ruby Vroom (1994), a weird little gem of an album many of us listened to well into the 2000s: personal favorite “Sugar Free Jazz,” “Bus to Beelzebub” (which used Popper’s bass playing to its full, spooky potential) and the melancholy “True Dreams of Wichita.”

Nothing about the evening felt tired or warmed-over. It’s clear that Doughty is completely committed to his art, even when he’s exploring songs that are two decades old. He seems to genuinely enjoy himself, too, bouncing rhythmically while messing with his samples and dials, and engaging his band members and employing just the right amount of audience banter. Toward the end of the show, he subtly called out the contrived institution that is the contemporary encore.

After the fake last song, Doughty finished the night with two of his most popular hits: a sweet rendition of “Janine,” and the formerly ubiquitous “Circles.” If you’ve only ever heard the latter in all its mid-’90s glory and you hate it, you should probably give Mike Doughty another chance. There’s a whole new album to explore. While you’re at it, keep an eye on Moon Hooch; they recently caught the attention of NPR’s All Songs Considered and are sure to be getting more soon.