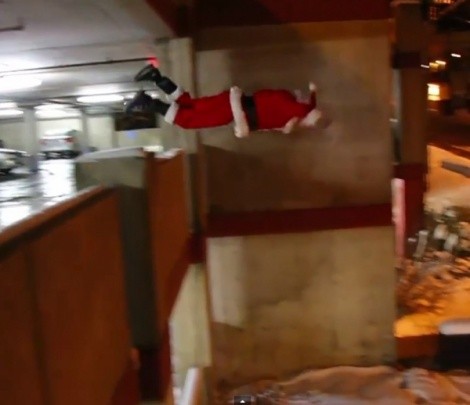 Kids these days can no longer relate to a traditional, jolly, old fat man in a red suit. No, today's youth need an extreme Santa -- one who listens to dubstep, blasts through icicles and somersaults off tall buildings.--- Local stuntman Ronnie Shalvis, aka Ronnie Street Stunts, recently debuted his action-packed video Parkour Santa, which features the bearded saint flipping his way across Salt Lake City rooftops.

While it would be nice to say that Santa wasn't harmed in the making of this video, there were definitely a couple of close calls for the bearded fellow. When asked about any injuries incurred during the shoot, Shalvis recalls that he “almost slipped off the roof of a three-story building,” which he nonchalantly states “kind of freaked the cameraman out.” Ronnie also explained the difficulties of performing parkour in the dark while in a Santa suit. “Every time I flipped, the beard would be in my face.”

Many of Shalvis' video have reached over a million views, and he was recently asked by the Italian car company Alfa Romeo to star in one of its commercials. But you've probably already witnessed Shalvis' skills in the popular Assassin's Creed parkour video, also shot in Salt Lake City in September 2012.