During the second week of the Sundance Film Festival, natives and newbies—dressed in the finest furs and North Face—filled the Rich Haines Gallery for another evening of live music at the ASCAP Music Café on Wednesday. --- Itching for an intimate and booze-accompanied acoustic series, the audience seemed more than thrilled with a CMA Songwriter Spotlight and a strong ending from the anticipated KT Tunstall.

“Rules of the round, there are no rehearsals,” Brett James said as the foursome started tuning their guitars. Chris Stapleton’s cover of “Drink a Beer” by Jason Aldean and Brandy Clark’s solid performances of Miranda Lambert’s “Mama’s Broken Heart” and Kelly Clarkson’s “Mr. Know-It-All” seized our attention.

But it was Lee Ann Womack’s original song that truly left us silent. Steering clear of a probable “I Hope You Dance” performance, Womack chose to sing a song written for her by the man to her left, country artist and songwriter Brett James, called “Stubborn (Psalms 151).” 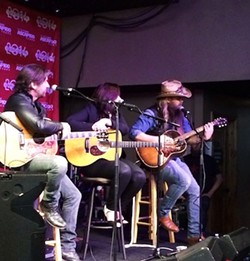 Just as the room seemed to be winding down, the raspy voice of KT Tunstall echoed from the stage. As anticipated, she gave quite the show, incorporating rain stick and bass beats into samples from her most recent album, Invisible Empire/Crescent Moon, and the older release Other Side of the World to Me.

Tunstall also surprised the audience with her newest song, “Made of Glass,” written alongside artist Andrew Bird, whose interesting and ghostlike whistle accompanied the acoustic performance.

The unspoken question lingered whether she would steer clear of an old favorite—that is until Tunstall jokingly exclaimed, “Now comes the part where most of you say, ‘Oh, that’s who she is!’” Cheers flooded the gallery as “Black Horse & a Cherry Tree” began and was soon accompanied by an entire crowd of backup singers. Ending the set, Tunstall gave a stimulating rendition of “Boys of Summer” that Don Henley himself would swoon over.

As listeners dispersed from Music Café, the warm tunes from the evening could be heard humming through the crowds.