For Super Bowl Sunday, a big pot of stew is my go-to football game food. Specifically, I really like to make Southwestern-style green chile and pork stew, also known as chile verde. ---

It seems appropriate, with the Denver Broncos playing in Super Bowl XLVIII, that I first discovered green chile stew many years ago at a Mexican restaurant in the shadows of Denver's Mile High Stadium. Since then, it's become one of my favorite things to eat.

Here is my favorite recipe.

salt and pepper to taste

I use fresh chile peppers. Of course, you could substitute canned peppers, but the flavors will not be as rich. If using fresh peppers, begin by roasted them on a grill, over a gas flame or under the oven broiler.

Get them nicely charred until they look like this. 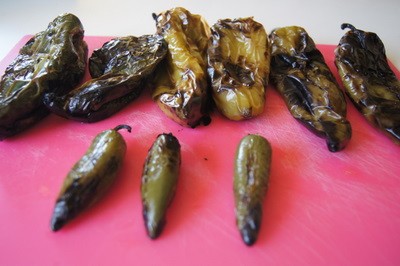 Then, seal the peppers in a plastic bag until they cool down enough to handle. The peppers will steam in the bag, making it easy to peel the charred skins.

Peel the skins from the peppers and remove the stems and seeds. It's easier if you do this under running water, but some cooks say it takes away some of the charred flavor from the peppers; your choice. The peeled and de-stemmed peppers will look like this:

Chop the peppers. For this recipe, I used 8 Anaheim peppers, 2 pasilla peppers and 4 jalapenos. It's fun to experiment with different types of chile peppers for different flavors.

In a bowl, mix the pork with a couple of tablespoons of masa harina or flour. This will help to eventually thicken the chile verde.

Heat the oil or lard in a large pot and brown the pork over medium-high heat.

Add the onions and garlic to the pot and continue to cook for a few minutes, stirring frequently. Don't burn the garlic!

Now, add the tomatoes, chiles, chicken broth or water and spices to the mix and bring to a simmer.

Simmer the chile verde for 2 hours or more, partially covered, until it thickens and the color becomes richer.

Season with salt and pepper to taste and serve with warm tortillas and, perhaps, Mexican rice.