Catching Up With Max Pain & the Groovies at SXSW | Buzz Blog

Catching Up With Max Pain & the Groovies at SXSW 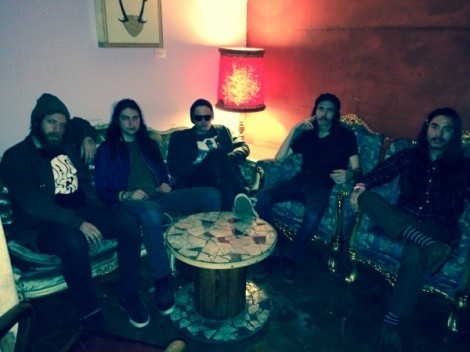 Before a jam-packed night of live music in Austin, I met up with local psych-rockers Max Pain & the Groovies at Rio Rita for an interview about their second year at SXSW and what's been happening with the band. David Johnson (vocals/keyboards), Dallin Smith (guitar), Shane Preece (guitar), Kallan Campbell (who joined the band as the new bassist in spring 2013) and Troy Coughlin (drums) stopped at SXSW during a two-month nationwide tour, and played several shows this week, including a showcase with fellow Lollipop Records artists.---

Max Pain & the Groovies will soon be re-releasing their self-titled EP on cassette tape, as well as entering the studio and working with Man vs. Music's Mike Sasich to release a new full-length album later this year.

What's been happening with you guys at this year's SXSW?

Coughlin: Meet up with a lot of friends that live everywhere else and not Salt Lake.

Johnson: Been networking a lot too down here, too, and meeting a bunch of people in bands. And then like reconnecting with them, too, [bands] that we already know from playing shows and touring. We met a bunch of bands down here that we’re playing with on tour also.

Coughlin: And get a little greasy at night, drinkin' some booze.

Coughlin: And it’s just a living room on wheels so you can discreetly just hang out.

Preece: Yeah, there’s couches in there, beds, we got bunk beds in there.

Coughlin: We had kind of a party in there last night. … Had a bunch of people in there.

Preece: We’ve had some awesome bus parties on this trip so far.

Will you be releasing any new music in the near future?

Johnson: We’re gonna record when we get back, we have a bunch of songs ready to record. And we were going to try to fit it in before we left but just decided it would be better after. We wanna release it on vinyl.

Is anything changing in the recording process for your new full-length album?

Johnson: We’ve always had bad luck recording, but now we’ve got a guy, Mike Sasich, who finally can get our sound right.

Coughlin: We never were stoked on our music so we never pushed it that hard.

Coughlin: He’s into the same kind of music we are, too, so it’s a lot easier.

Campbell: And he’s a musician.

What's been your favorite part of SXSW?

Coughlin: I was pretty stoked on seeing, at the showcase we played at, just like Mystic Braves and Mr. Elevator & the Brain Hotel. They’re just really solid bands.

Preece: A lot of cool bands all in one spot, that was a cool showcase.

Coughlin: They’re the homies, but we kind of more or less recently met them, so it was sick to kick it with them a little bit more.

Johnson: I think it’s cool how much you can learn down here. About the whole music industry and how everything works. It’s like learning every day when we go to shows.