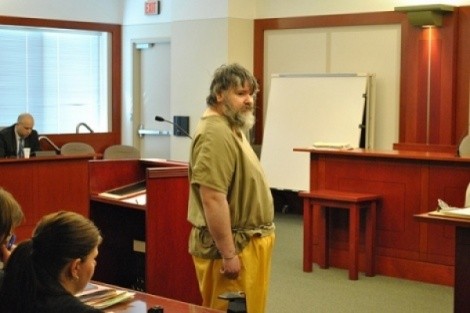 An attorney for a man who has been jailed since September for telling a hospital crisis worker he was having homicidal thoughts says Salt Lake County prosecutors have pursued the case for political reasons.---

In court documents, Stiles' public defender contends that prosecutors were pressured by Salt Lake City Police officials and attorneys for the City Creek Center mall into pursuing a case they knew couldn't be backed up in court.

Stiles' attorney, Neal Hamilton, asserts that he and prosecutors had hammered out a deal to dismiss the criminal charges against the man and release him to a psychiatric hospital. At the heart of the deal, which broke apart just before being finalized, was the fact that prosecutors didn't believe the state had a case to prosecute the mentally ill man.

“The state clearly represented that it was under pressure to not dismiss this case, and that in light of the publicity a different resolution needed to be reached,” Hamilton's motion states. Hamilton goes on to say that multiple prosecutors on different occasions stated that the case would be diverted from criminal court “because the state believed that it could not satisfy a finding of probable cause against Mr. Stiles.”

Salt Lake County District Attorney Sim Gill says he's not permitted to comment on any negotiations that may have taken place between his office and Hamilton. And on whether the prosecution is political in nature, or was motivated by threats from police, Gill says he doesn't know what Hamilton's talking about.

“You can make certain assertions, but what's the substantive basis of that?” Gill says of Hamilton's motion. “That's what we're trying to figure out.”

A Salt Lake City Police spokeswoman said it would be “inappropriate” for the department to comment on Hamilton's motion. A representative at Kirton McConkie declined  to comment on the case.

When Stiles was arrested on Sept. 23, 2013, authorities announced they had jammed the gears of a domestic terrorist attack.

The charges were based on statements Stiles made to a crisis worker at a hospital more than a month earlier.

In August, 2013, Stiles told the crisis worker he had been thinking about shooting people at the City Creek Center mall, the Cinemark Movies 10 theater in Sugarhouse and perhaps even blowing up a UTA Trax train. The crisis worker called the police, and Stiles was arrested and booked on suspicion of making terroristic threats.

Prosecutors in August, however, declined to file charges against Stiles, who was released from jail. Gill confirmed that his office reviewed the case and decided%uFFFD against pressing charges.

But by September, the mood in the DA's office changed. Gill says the decision to take another look at any case where charges weren't initially filed happens all the time. He says further review of a case could be prompted by a citizen, or the police. He declined to say if police asked prosecutors to reconsider filing charges against Stiles.

A key piece of the puzzle missing from the widespread news coverage of the case was that Stiles had called the police on himself. In August, and again in September, Salt Lake City Police officers responded to Stiles' home because the man was cutting himself. On both occasions, Stiles requested he be taken to the hospital, and both times, police obliged.

Stiles never had any weapons, and in police reports, officers note that Stiles didn't appear to have the means to obtain weapons.

But once at the hospital, Stiles told a case worker how he was feeling. And while his statements about shooting people were troubling, Hamilton told City Weekly in a story published April 3 that mentally ill people make disturbing comments all the time.

He says mentally ill people who have violent thoughts should be encouraged to seek help, like Stiles did, not discouraged by the threat of prison.

A preliminary hearing is scheduled for June, during which a judge will determine if Stiles should stand trial.