The Life In A Day: Gabe Dusserre (Episode 1) | Buzz Blog

The Life in a Day Culture

The Life In A Day: Gabe Dusserre (Episode 1) 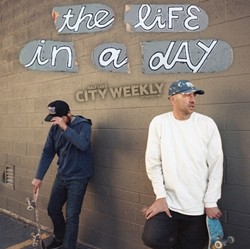 The Life in a Day is a monthly video series designed as a creative challenge for local skaters to produce video in the span of one day. The ultimate goal is to illustrate an honest portrait of the skater, to capture how they skate, how they think, how they interpret public space and architecture.---

This month's episode is all about Gabe Dusserre, an SLC skateboarding legend. His name is synonymous with SLC street skating, and I knew the only way to set off a SLC skateboard video series was with him. He's been consistently ripping the streets of this city for nearly 25 years and as you can see he's skating as hard as ever.

Gabe and I sat down and talked about what we wanted to accomplish with this video part. He wanted to go about it like any regular day of skating with his regular routine. He knew he wanted to skate some classic spots like the U of U fountain, to show a bit of his history. The same spot were he perfected many of these tricks some 20 years ago. The fountain is definitely a SLC skateboarding mecca and historical monument. So we made it a must that we skate the spot and pay our homage. We had other classic spots in mind to visit as well, but as we started skating downtown, we basically got lost in the moment and spent a couple of hours just spontaneously mobbing around the streets, pushing each other, exploring, and having fun with the homies; which is really the essence of skateboarding, and Gabe. - Adam Terry, aka Finale Grand 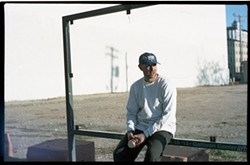 All pics and stills shot by Sam Milianta