Local Releases: The Last Of Spring 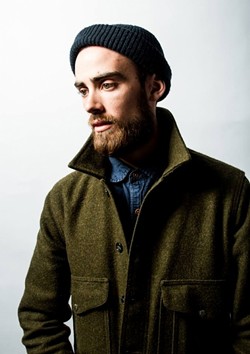 There's not a lot to talk about as we close out May and head into the summer music season, but we've got a couple of local releases you may enjoy. --- The first, the debut full-length album from Provo band Salazar, came out last night. Salazar is a six-piece dream-pop ensemble comprised of experienced hands and newer names to the scene, fronted by Alexander Woods (seen to the right, courtesy of Facebook) with accompanying musicians Bret Meisenbach, Michael Hart Dixon, Landon Young, Adam Klopp and Kyle Hooper. Their debut album, Saudade, has elements of alternative, pop, folk and experimental rock that make the entire album very enjoyable to listen to. You can download a copy now on their Bandcamp page for $8, buy a physical version for $12, or possibly get both when they play at Diabolical Records on Saturday night.

Next up is the latest release from the project Mar-Tie, with Swoody Records. This is an interesting three-producer project created by Phil Jacobson, Blair Sterrett and Otis Fodder. They've taken music done by Jacobson's grandfather, Ned Martin Stringham, cleaned it up and have presented selected tracks on an EP titled Sung By Mar-Tie. If you're into older folk recordings with a lo-fi sound, this will be worth your time. You can download it now off Bandcamp for whatever you'd like to pay.

And then just to close this up, we've got a new hip-hop release from Modrn Wilderness, an SLC emcee/producer who has been working behind the scenes for a couple of years now, honing his own skills while working on material that hasn't yet surfaced. This week he released his debut album, MODRNWILDERNE$$, a nine-track hardcore rap album featuring producers like Gabriel King, AJ Radico, Brandon Joseph and LAM. Honestly, this album is not going to be everyone's taste, as the "hardcore" label should tell you, a few of the tracks get up in your face real quick on heavy content with nothing to soften the blow. But the beats are sound and there's some talent in there that will get refined with experience. You can download it for absolutely free from Bandcamp now.