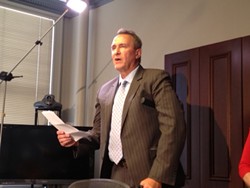 “Politics” is a dirty word even in politics but it's especially negative when it refers to politics driving a criminal investigation, which is exactly what former Attorney General Mark Shurtleff alleged a few hours after being released from the Salt Lake County Jail after being charged with 10 felonies for corruption. In a press conference at the office of his Salt Lake City attorneys, Shurtleff called out his arrest and investigation as a “political sideshow” with Salt Lake District Attorney Sim Gill as the ringmaster.

Shurtleff's press conference came on the heel of a morning conference where Gill and representatives of the Salt Lake City FBI office and the Utah Department of Public Safety announced the arrest of Shurtleff and his successor John Swallow. Combined both men are facing up to 30 years in prison in response to 21 combined felony charges and two misdemeanor counts specifically against Swallow.
Shurtleff read a statement at his press conference flanked by members of his family and his legal team but would not answer questions about the charges under advice of counsel.

Shurtleff was quick to say that politics were involved on the part of Democratic Salt Lake District Attorney Sim Gill who teamed up with Republican Davis County Attorney Troy Rawlings in the state investigation into Shurtleff and Swallow.

Shurtleff went on to slam Gill for not calling a grand jury and questioned whether the state investigators had followed through with a plan to have any state charges reviewed by a panel of county attorneys before moving ahead with charges. To up the ante even more Shurtleff challenged Gill as a prosecutor and asked that he himself act as a lead counsel in pre-trial and trial hearings in the case.

Throughout Shurtleff's press conference he almost never referred to Rawlings and only briefly mentioned the role of the FBI and the Department of Public Safety in the case, instead repeatedly hammering the Democrat Gill for playing politics with the justice system.

Shurtleff pointed out that over the years he has repeatedly gone to the FBI with concerns about certain individuals even reporting an attempted bribery by an associate of Marc Session Jenson to the FBI. Shurtleff also said that during the official commencement of the state investigation against him that he repeatedly sought to meet with Gill to discuss the facts but that Gill refused.

“I have been deprived of that opportunity by Mr. Gill,” Shurtleff said. “Which should tell anyone that rather than caring about a full investigation, caring about a full understanding of the facts that he prefers to charge ahead with incomplete information. Which also to me—and I think anyone—suggests a pretext for a political motivation coming to fruition in an election year in which he is running for a second term.”

In an e-mailed statement Republican Davis County Attorney Troy Rawlings emphasized Shurtleff and Swallow are presumed innocent until proven guilty. Rawlings would also not respond to specific allegations from Shurtleff about politics or about reviewing charges before a panel of county attorneys but did say the “weight of all evidence will be vetted by the adversarial nature of criminal proceedings before third-party decision makers such as a judge and jury.”

Shurtleff cleaved to his innocence and said that while he was not perfect that he was also not a lawbreaker.

“I have never intentionally committed any violation of ethics, I have never misused or abused the public trust and I have certainly have not violated any of the criminal laws of the state of Utah,” Shurtleff said before once again lasering in on Gill.

“He knows he can't prove beyond a reasonable doubt so he's going to spend millions of the taxpayer's money,” Shurtleff said. “He's obviously delayed the case long enough—two years—to ensure that I cannot establish my innocence and obtain justice until after this November election. But then again he probably doesn't care as long as his political aspirations are met.”