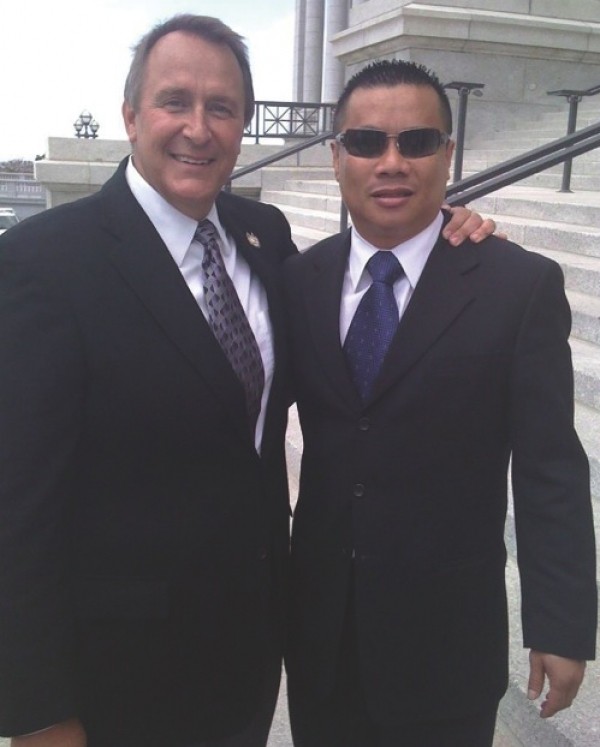 In December 2012, then-Utah Attorney General Mark Shurtleff sent an e-mail to friends and colleagues titled “Riding off into ... the Private Sector,” announcing that after his third term of public office ended, he’d be joining the influential Washington, D.C., law firm Troutman Sanders. Less than six months later, in June 2013, however, Shurtleff announced that he was leaving Troutman so he could spend more time with family. But he was soon back in the saddle with a new government-relations business called The Shurtleff Group—whose address is in a building owned by Sov Ouk, who ran the now-defunct telemarketing business Global Marketing Alliance.

Ouk is a friend of Shurtleff’s for whom Shurtleff, according to records, tried to secure a home-loan modification in summer 2012, while he was in office and the telemarketing company was facing fines from the Utah Division of Consumer Protection.

On July 2, 2012, Shurtleff e-mailed Zions Bank CEO Scott Anderson, thanking him for his friendship over the years and following the pleasantries with a request: “I have rarely asked a personal favor but I do so now on behalf of a close friend of mine.”

Shurtleff then goes on to explain how his friend Ouk had been denied a home-loan modification despite previously being in good standing with the bank. Shurtleff says Ouk’s “credit-management issues have arisen due to a divorce that has taken 4 1/2 years to settle.” In the e-mail, Shurtleff also offers his personal endorsement of Ouk, writing that Ouk “wants to maintain his positive relationship with Zions Bank and get it to a good standing. He is one of the most honest businessmen I have ever known and trust his motives, intent and ability to succeed.”

But Ouk and his company have faced their fair share of legal troubles. As Shurtleff was asking Zions Bank to help Ouk, Ouk’s Global Marketing Alliance (GMA) was facing a $20,000 fine from the Utah Division of Consumer Protection.

According to the division’s complaints, Ouk’s telemarketers made a number of deceptive claims to customers across the country, including the claim that GMA’s program had “no failures.” In November 2012, Ouk’s company settled with the division by giving up its telemarketing bond and having Ouk step down from managing the company, which has since become inactive.

Ouk’s company had been in the headlines before, when, in 2009, he threw a party at his company’s office at 3135 S. 1300 East in Salt Lake City. A number of employees consumed alcohol at the office and then moved the party to a downtown Salt Lake City strip club. According to police reports, after leaving the club, an intoxicated GMA employee crashed while driving the company BMW; police later determined he’d been traveling at speeds as high as 120 mph. The driver is currently serving a life sentence for his role in the crash, which left one employee dead.

According to documents from Ouk’s divorce file, his company paid $400,000 in liabilities for the company party and the crash.

GMA was part of what’s known as the online business opportunity (OBO) industry, companies that pitch consumers on costly programs and coaching services to help them set up online businesses, work from home or make money with online auctions. Some programs charge consumers’ credit cards anywhere from $2,000 to $10,000.

Many OBO companies call Utah home, and since the industry began blossoming in Utah in the mid-2000s, Shurtleff has been close to it, having raked in hundreds of thousands of dollars in campaign donations from the industry in his various campaigns for state and federal offices.

In a Facebook message, Shurtleff denies the home-loan-modification favor had anything to do with Ouk’s business or the industry he was involved in.

“Sov was a friend in need. Period. It had nothing to do with his industry or his company,” Shurtleff writes. “Therefore zero conflict.”

The home-loan modification wasn’t the first favor Shurtleff did for Ouk.

In 2010, Shurtleff added his voice as a testimonial in an infomercial for one of Ouk’s other business efforts, a nutritional-supplement product called 8 Zone. “I’ve tried a lot of vitamins and supplements in my life, and this is the first time, with the Red Zone, that it’s really worked for me,” Shurtleff says in the infomercial. “I loved it.” In January 2012, Ouk was in the throes of an ugly divorce that, according to his ex-wife and police reports, included verbal and physical abuse. As City Weekly reported in the June 2012 story “Dialing for Dollars,” in January 2012, Ouk had been late picking up their children, so his ex-wife took them to the movies. Later that night, she was terrified to see an unidentified black car idling in her driveway. Her fear that it was Ouk was confirmed after she called police, and she was also surprised to discover that Ouk had had Shurtleff drive him to her home in what she calls an act of intimidation.

Ouk told City Weekly in an e-mail that his ex-wife’s boyfriend swore at him over the phone and that he asked for Shurtleff’s help because he feared for his children’s safety.

As for his home loan, Ouk says the bank denied the modification despite Shurtleff’s efforts. Ouk also denies having any business relationship with Shurtleff.

“I have no business relationship with Mark, on any of his business endeavors other than letting my friend use my place as his mailing address or office if needed,” Ouk writes via e-mail.

University of Utah political-science professor Matthew Burbank says that in general there is a concern for the public about the power wielded by elected officials turned lobbyists.

“People who have left elected office have a lot of knowledge and, in essence, what they are doing is trading on that information,” Burbank says. “There’s always a concern when people leave office and turn around and start lobbying. The lobbyist is going to be in a position to exert undue influence in that lobbying process.”

While Shurtleff declined to comment on the kind of businesses he would be lobbying for, he said he was not doing work for any companies in the OBO industry.

“I don’t have a single client or anticipated client in that industry!” Shurtleff writes, adding, “What is wrong with you?”