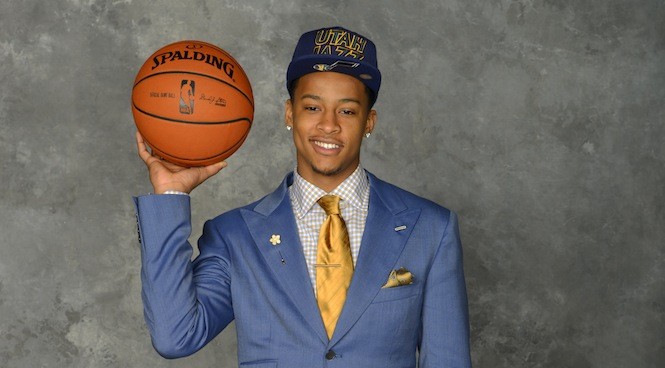 Trey Burke, Utah Jazz point guard and guy who got sued for making fun of people on Instagram, retired from Twitter Monday morning in a fiery blaze after pictures of his tallywhacker were leaked on the internet, which was great timing considering that today was Utah Jazz media day.

Some Twitter users initially believed that Trey Burke was trending because of a possible trade, but it turns out it was just because of his penis ... which he took multiple pictures of ... for some terrible reason.

I'm not even going to link to the pictures here. You can go on that quest yourself.

There's no word yet from Burke or the Jazz on how exactly the pictures were leaked, but Burke did address the issue Monday afternoon, telling those at media day that:


"Publicly I want to first and foremost apologize to my family and apologize to the Miller family as well and uh, and my teammates as well. We already talked about it in the locker room and from this point forward it won't happen again."

Obviously, Jazz players dodged the situation as much as possible. When David Locke—who does the radio play-by-play for Jazz games—asked Gordon Hayward what the hardest question he was asked today, Hayward took a long pause and finally responded, "Has being married affected your ability to play video games?"

This is just one more chapter in the Trey Burke social-media circus. In April, as mentioned above, Burke (along with rapper Waka Flocka Flame and Gold Bond spokesman Shaquille O'Neil) mocked a Michigan man on Instagram who has hypohidrotic ectodermal dysplasia, a condition that results in a reduced ability to sweat, abnormal hair growth and missing teeth.

According to Utah Jazz general manager Dennis Lindsey, the organization is holding off from any immediate action and is still "fact finding."