2014 had been an impressive year for the art scene in Salt Lake City, not just because of an influx of visiting exhibitions and solo artists showing off their works, but also because of many independent galleries and art spaces setting up shop and getting comfortable, and helping to highlight new and established talent to give the scene a boost of creative energy. Lee is one of the established illustrators to really shine this year, bringing forth a new array of material from her collection that continues to influence a more magical and surreal side. Today, we chat with Lee about her career and the process behind her art, as well as what's to come. (All pictures courtesy of Lee.)

Gavin: Hey Desarea, first off, tell us a little bit about yourself.

Desarae: Tell you about myself? There's not really all that much to tell. I'd say I'm relatively average, aside from my obsessive need to be constantly making or doing.

Gavin: What first got you interested in art and what were some early influences on you?

Desarae: I've been interested in art since I was a wee lass. I've always been drawn to minute details and fine line work. At first it was artists like Dürer and Rembrandt, but eventually, I discovered the work of Edward Gorey, whose humor and technique continue to be a strong influence on my style. I also have a closet love for color field painters, like Rothko and Albers, and studying their paintings has pushed me to experiment with subtlety and depth in my watercolor washes.

Gavin: What pushed you more toward illustration and what were some of your early designs like?

Desarae: Obsession with fine line work combined with limited access to printmaking materials led me to experiment more with pen and ink. My work is naturally illustrative; I can't put pen to paper without telling a story. You ask about my early designs, but they were embarrassingly terrible. It took me awhile to find a style that came naturally and there were many horrific experiments along the way.

Gavin: You received your Bachelor's from BYU in 2006. What made you choose BYU and what was their program like for you?

Desarae: I received my Bachelor's degree from BYU with the intent to be an art teacher, a profession I briefly pursued. At the risk of derailing this interview train, I'll avoid getting into all kinds of speculations about being a member of the LDS church through my college years, how it affected my perception of myself as a woman and as an awkward introvert. What I will say is that during my years at BYU, I spent a lot of time suppressing my natural self in order to fit into a culture that I consider gender-biased and repressive, which tends to be a common theme in my work. Aside from the awkward social and religious aspect, BYU was an excellent education with brilliant professors.

Gavin: How do you feel your style developed while you were there from when you arrived to when you graduated?

Desarae: If anything, while I was at BYU, I became more comfortable with artistic abstraction and the power of simple shapes and colors. Although my work is more on the realism side of the spectrum, my composition and color work owes a huge debt to what I learned in my modern art and sculpture classes.

Gavin: What pushed you more toward intaglio style of drawing and working with watercolors?

Desarae: I wouldn't say that I was pushed toward this intaglio style but that I naturally cycled around to it. As I said earlier, I experimented with a lot of different mediums and styles but when I experimented with pen and tiny line work, it just felt natural. The idea of creating texture and form by blocking out the white of the paper with repetitive pen strokes was immediately comfortable. I didn't start experimenting with watercolors for a couple of years after starting in on my pen and ink style, and I still feel as if I am a relative beginner in the medium. I like working with watercolor because it seems like the exact opposite of pen and ink, as it is so difficult to control and never seems to give a shit about what I'm trying to make it do. I love that juxtaposition of the reliable, predictable ink and the free-flowing watercolor.

Gavin: What was it like for you to break into the local art scene during those years and doing group exhibitions?

Desarae: I owe a huge debt to Emily Edmunds of The Hive Gallery for being the first person to show my work, and for continuing to encourage me while I got started. Like anyone breaking into the scene, at first I was just excited that someone was interested enough to show my pieces, and I was ecstatic when I sold my first piece. Which I sold for an obscenely small amount of money. Getting more and more into the art scene just took a lot of leg work, applying to coffee shops, galleries, restaurants, and just about everywhere else. It took, and still takes, a lot of rejection, which is something that I don't handle well, in spite of loads of practice.

Gavin: What's the process like for you when creating a new piece, from idea to a final concept?

Desarae: I think I differ from most artists in that I don't really keep a sketchbook. It feels very unnatural to me to just abandon a drawing at the sketch stage; everything needs to be fully realized and complete. As such, I spend a lot of time visualizing and thinking about a piece before I ever put pencil to paper. Once an idea hatches, I'll rearrange composition and objects in my head until it feels "right." I don't really have any other words for how it feels when I'm ready to draw something, other than "right." The drawing naturally changes and develops as I draw it out in pencil but once I start in with the pen, everything is set in stone. I always start with the background and the more boring pen work, because doing the figures or the foreground is my reward for getting through the grunt work. I trust myself more with pen than I do with pencil and if there's something I couldn't figure out in graphite, going over it in pen usually makes it turn out right.

Gavin: Do you change or play around with the design when your making it, or do you try to stick to the original idea as much as possible?

Desarae: The most important thing that I do for my work is to let it go. The more I try to force my drawings, to make them what I consciously think they should be, the less successful they are. I sincerely believe that there is power in the connection to the subconscious, and the less I get in the way of that, the better.

Gavin: Over time your work has seem to have transitioned from purely black and white into more vibrant colors. What was the influence behind the change?

Desarae: I have no idea why my work has started becoming more colorful, other than that I've gotten braver in experimenting with watercolor. I also have no idea why it is exclusively my larger pieces that get color, and my smaller ones that stay black and white. I do know that there is part of me that wants to keep working bigger and bigger with more and more color and another part of me that wants to work smaller and smaller with no color at all. These two factions continue to war with one another.

Gavin: How much of a transition was it going to solo shows and becoming the centerpiece for a gallery?

Desarae: I still very much enjoy doing group shows. I don't feel that there is a huge difference for me between doing a solo show or a group show, other than one looks better on my resume. Either a solo show or a combined show will bring out that uniquely artistic trait of being simultaneously narcissistic and insecure.

Gavin: You've had some cool opportunities to be featured on magazine covers, what was it like creating pieces for Lamplighter Review and The Mattress Parlor?

Desarae: Every cover I've done has been for a poetry publication of one sort or another. I am lucky enough to know some truly kick-ass poets and am flattered that they would ask to feature my work on their books and periodicals.

Gavin: What pushed you to start doing art festivals and how has that experience been for you?

Desarae: I started doing art festivals after my first Utah Arts Festival in 2012. I finally started to see how art could become my full-time living as opposed to something small I was doing on the side. Although they take an insane amount of work and require a thick skin (or simply the ability to bite your tongue), I still make the majority of my income doing arts festivals and shows. It means a lot of travel and has drastically changed my lifestyle, but I have met some beautifully interesting people. Eventually, I hope to be able to travel less but for now I enjoy seeing so many parts of the country.

Gavin: What are you currently working on and when can we expect to see your next show?

Desarae: I am currently working on a triptych that loosely references the Triple Goddess of Neopaganism. I've been loosely exploring femininity for the last year or so, and I suspect that that trend will continue for awhile. Throughout November, my reproductions are being shown at Q Clothing and at Salon MC. In December, my original works will be featured at Silver Schmidt Design Studio for the Holiday Gallery Stroll on Dec. 5 and the Holiday Art Crawl Dec. 6. As always, I have cards and fun things for sale at Urban Arts Gallery.

Gavin: What can we expect to see from you over the rest of the year and going into next?

Desarae: Going into the next year, I expect to be doing more work with etching and drypoint. I will, hopefully, be apprenticing with a printmaker in San Diego and am lined up to do an artist-in-residency program at A6, a printmaking studio in Bend, Ore. I'm anticipating trying new mediums and techniques, although I will continue to work with pen, ink and watercolor. Also, really hoping to find someone who will pay me a year's salary to do an entire room in .2mm pen. 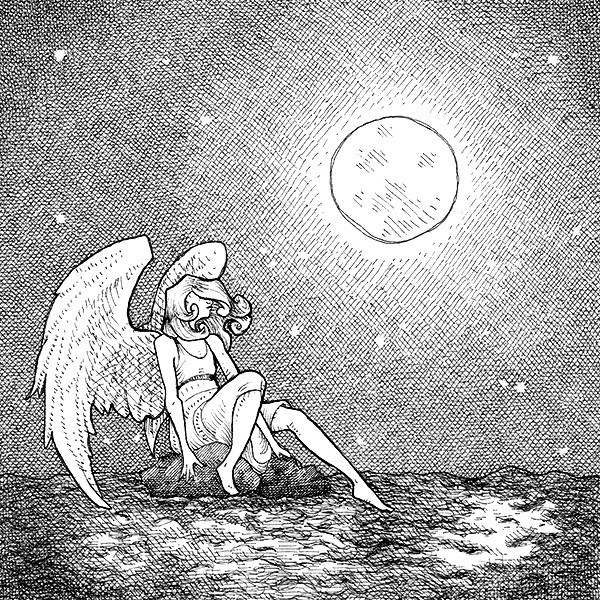