Council likely to still give $25K for "clean-air celebration" 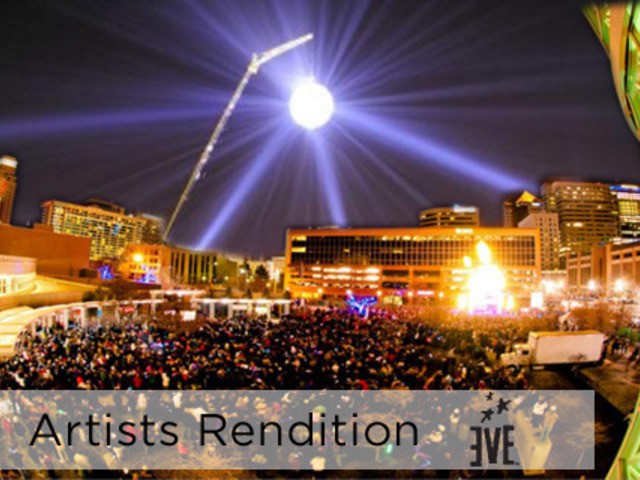 On Saturday afternoon, the Downtown Alliance-led Kickstarter campaign for the "US's largest disco ball" sputtered to a close about $11,000 shy of its $25,000 goal. The enormous 20-foot-diameter mirrored ball was meant to be a clean-air replacement for the traditional fireworks at the annual Eve celebration, but unfortunately, it's now more of a lesson for how not to execute a Kickstarter campaign.

Whether you liked the disco ball idea, hated it, or you just didn't care, the entire project was plagued from the start.

In total, this was a $50,000 disco ball, a project that would've been financed partially by a $25,000 contribution from the Salt Lake City Council (which, the Downtown Alliance will likely get to keep for some reason, but more on that later) and the remaining funds ideally coming from the Kickstarter campaign. This was a big project that needed a significant amount of time to secure it's financing. However, the disco-ball idea and its crowdsourcing plan were revealed Nov.10, less than two months before its planned debut on New Year's Eve—which left only one month to get interest from the public and convince them to finance it, and less than a month to actually build it.

But the biggest issue surrounding the disco ball campaign was the idea itself. No one really understood or could explain why we wanted to build a disco ball in the first place. Sure, it was a symbol for clean air. But why a disco ball? Just about anything other than a tire fire is a clean-air solution to fireworks. Was Salt Lake City influential in the rise of disco back in the '70s? Was the world's first disco-ball factory located in SLC? Did Brigham Young have a small disco ball hanging in the rear of his pioneer wagon? They could have announced a Kickstarter for a giant blacklight poster of Mayor Becker's face and it would've made as much sense, and probably would've been cheaper.

"It's interesting to see the projects that resonate on Kickstarter and the ones that don't," says Nick Como of the Downtown Alliance. "Like, you can go for something as [ridiculous] as a potato salad, which someone raised $10,000 for, or something like that." 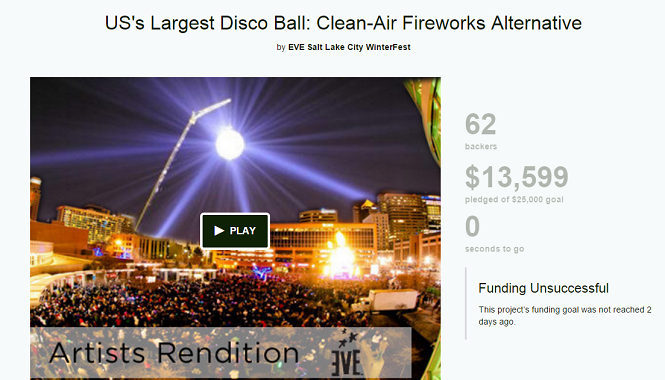 It's easy to say in retrospect that the disco ball idea was an uninspiring alternative to fireworks, to say the least, but a failed Kickstarter doesn't always mean your idea sucked. Plenty of bad ideas have successful crowdsourcing campaigns (see Garden State 2). A failed campaign usually means you don't know anything about crowdfunding.

Mike D'Avria of Charlotte Information Strategists is a friend of mine who specializes in managing Kickstarters campaigns, notes that people who donate to Kickstarters because they want the incentives would probably not be lured by those offered in this campaign. "Most of those people don't care what the backstory is, or if it’s good for the environment," D'Avria says, adding that none of the Downtown Alliance's "rewards were like, 'Oh I want that, that’s cool.'"

The main reward, for anyone who donated more than $100, was an invite to a Nov. 28 dinner party, though the Kickstarter campaign went till Dec. 6. Other prizes included mini disco-ball souvenirs, tickets to Eve and disco-ball tours, with the "big" prize, for anyone who donated more than $5,000, being sponsor recognition on "all signage, printed collateral and eveslc.com."

"It was really hard to come up with what these levels would get you," Como says. "You can go inside the ball, the dinner, the VIP party, tickets to the event, things like that. We're a nonprofit, we don't really have a lot of money. We invest money into Eve; we don't make money on it."

"The success of a Kickstarter depends on getting people excited about it and sharing it and donating to it early on," he says. "I don't think they did a very good job at looking at successful campaigns. I get phone calls all the time because people think there’s just free money on Kickstarter. You have to do a lot of work, a lot of publicity and a lot of explaining to people why you need this money. They did not do that at all."

There is one positive thing to come out of this for Eve: Even though the campaign was a failure, the Downtown Alliance will probably get to keep the $25,000 from the Salt Lake City Council.

"They vote on it on Tuesday," Como says. "But I'm sure they've committed [the money], which would give us a little extra motivation to find a way to use it. It's for a clean-air celebration; it's not for fireworks or a band. That was sort of the pitch we made to them. I don't think we could go out and hire Rancid, or Macklemore and Ryan Lewis. I don't think they'd be OK with it."

So, if the money does get approved, the Salt Lake City Council will essentially give Eve $25,000 just to straight-up not do fireworks, which, according to last year's estimates, only cost around $10,000.