One of the newest trends to hit the local podcasting networks has been comedic shows, often featuring standup comedians performing around town as they get together and chat about whatever they feel like. The premise may be a lot simpler than other shows, but it works quite well in the right hands as truly funny people can spin gold for hours just shooting the shit in someone's apartment with a couple of beers and the microphone on. The Dragon Cubs of Zion podcast features three men doing just that, producing one show a month with 2-3 hours of content for those looking for a quick laugh in their day. We chat with the trio about their show and what they hope to bring to the podcasting table. (All pictures courtesy of DCOZ, for this interview the members chose to answer as a group.)

Gavin: Hey everyone, first off, tell us a little about yourselves.

DCOZ: The “cast” of the Dragon Cubs of Zion podcast is composed of Alex Simashov, Steffan and Dustin Hagen. We’re just three equal opportunity offenders who enjoy each other’s company whilst discussing a wide range of topics. Basically, we like talking shit about the world with our guests.

Gavin: What got each of you interested in comedy and what were some early influences on you?

DCOZ: While Alex, the “producer,” doesn’t do any , and Dustin both enjoy making people laugh. We enjoy a full gambit of comedic styles ranging from Tim & Eric’s show to the likes of Bill Burr and Dave Chapelle. We laugh at anything really if we have the right mood or are under the right influence. Throw Doug Stanhope in that mix as well. And Mr. Bean.

Gavin: Did any of you have an interest in radio or podcasting prior to the show, or was it just something that was in the culture that caught your eye?

DCOZ: Podcasting has always sounded like an interesting concept due to the fact that it is relatively cheap to do and could be quite a fun experience. We are fans of all kinds of different podcasts out there in the interwebs. The internet has transformed our world into a place where commentators have become an attraction in their own right. This is a great time for human expression, in general.

Gavin: When did the three of you first meet each other and become friends?

DCOZ: We’ve known each other since the early days in middle school when Steffan used to play drums in a band, I used to sell pirated music for a dollar, and who knows what Dustin was really up to. Probably smoking weed somewhere behind the seminary building.

Gavin: How did the idea of starting a podcast come about?

DCOZ: Alex used to have a lot of drunken conversations and thought it might be fun to record some of them. He would ask his friends and/ or random people to strap on headsets and talk into a microphone when any topic of his interest came up. When he and Steffan got together they found a good flow and could easily talk through three hours. Dustin later joined them in their quest for legitimacy through his hilarious commentary, passive reading of outlandish news stories, and, of course, his insight into the human psyche. That last one is bullshit.

Gavin: What was it like gathering up all the equipment and software you needed to put together a recording space?

DCOZ: The podcast is done at Alex’s house in a nerd cave room where the walls are adorned with local art depicting business attire wearing Star Wars characters, Batman kissing Catwoman, and Japanese samurai style scroll art featuring Teenage Mutant Ninja Turtles and Mario battling Bowser. The equipment was bought mostly online through KSL classifieds and Amazon. After some googling, it was actually pretty simple gathering all of the required equipment. All you really need is a phone these days but if you want your podcast to actually sound good, you’ll need some microphones and mixer. The software we use is all free, but the hosting is paid for. Our audio files are hosted on Podbean which is very simple to use, relatively cheap, and you can listen to the entire podcast on their website. We also put up video on Ustream, which isn’t the best service in the world, but it has a free version. If you want to do HD content, you’ll have to pay up. The podcast can be found on iTunes and listened to on your podcast player (Stitcher app is our favorite).

Gavin: Did you experiment with test shows or did you dive right in with no plan?

DCOZ: The Dragon Cubs of Zion podcast has very little planning about it. The most planning we do nowadays is inviting somebody as a guest and finding a few topics and some weird news stories. When our guest Christopher Stephenson showed up to do the podcast, Alex, opening the door in his pajamas drinking wine, had no idea who he was. We generally like to hang out and chat for a few minutes before strapping ourselves in. I guess the answer to the question is mostly no.

Gavin: What was it like putting together the first show, and where did the name come from?

DCOZ: At first, the show was malformed and all over the place. We have gotten the process down to a pretty slick flow. The name actually came from a rambunctious homeless guy in downtown Salt Lake City who was clearly in the midst of a strange trip on some kind of drug. We were on our way to a restaurant when he approached our group of about 10 people and starting explaining to us his uncanny ability to see past reality. After tossing flowers at us and regurgitating all sorts of metaphysical ramblings, he rapturously referred to us as his Dragon Cubs of Zion. Seemed like a great fit.

Gavin: What was the public response to the first episode and how did you feel it came off?

DCOZ: To be honest, I don’t remember what our first episode was about. Our podcast somewhat materialized into existence over the course of a couple of years. Alex still thinks they’re all horrible in their own special way.

Gavin: What made you decide to make it a monthly podcast as opposed to a weekly like others?

DCOZ: Due scheduling and time constraints we have been making about two podcasts a month. Plus our hosting only allows for a certain amount of data uploaded per month. If people are interested, we might step it up to a weekly thing.

Gavin: How did the idea come about to bring in guests for every episode and how do you choose who to bring on?

DCOZ: Being a part of the community, Steffan and Dustin know a lot of great local standup comics who make great podcast guests. We also have other random people on as well. You don’t have to be a local comic to be on the show. When the podcast started, we really just wanted to talk to interesting people. Every once in a while we do a show that’s just us three.

Gavin: Do you have an idea of what you want to talk about before it starts or is it all on-the-fly?

DCOZ: Most of it is on-the-fly. We do have a few topics written down in case we need them. We also have a segment where Dustin shares some strange news stories. Towards the end, we share some comedy bits.

Gavin: How has it been for you interacting with members of the standup comedy scene and helping promote the work they do throughout the show?

DCOZ: It has been great! Standup comics always have something interesting to add to any conversation. Their twisted view of the world is perfect for our type of curse-word-laden discussions about life. This past November we actually put together a Dragon Cubs of Zion comedy show at the Sandy Station club featuring our podcast guests and gave the proceeds to the family of recently deceased local comic Mindy Kaye. It was nice to see everybody come out.

Gavin: Are you looking to add anything new to the show or change up the schedule as time goes on, or are you comfortable with the format you have now?

DCOZ: As the show goes on, we might try adding new funny segments, make or take phone calls, or do the show from different locations. There have also been thoughts about getting some better equipment and nicer chairs (this is directed at Alex). 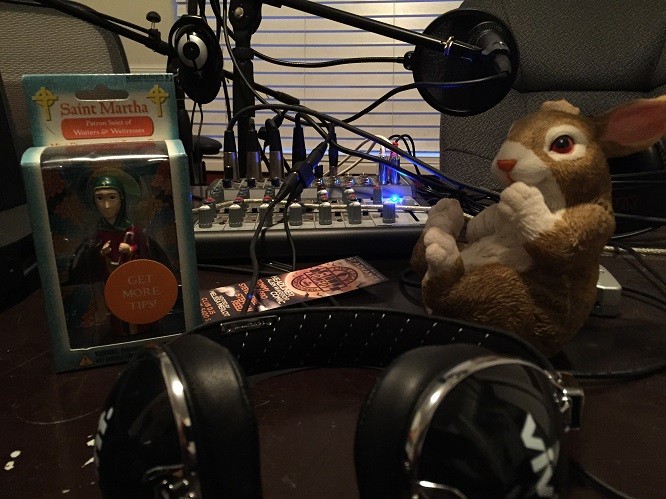 Gavin: Where do you see the show going as you continue to grow and gain an audience?

DCOZ: The show has potential to expand and grow the already impressive Salt Lake City comedy scene. As long as there are interesting people to talk to, interesting things to talk about, and if it is still fun, we’ll keep doing this.

DCOZ: In 2015, you can hopefully expect some podcasting from , better equipment, and the same level of maturity. We also have a huge lineup of guests including Christopher James, Steve Uribe, Nicholas Smith, Melissa Merlot, Marc Hanson, Keane Clark, Jeff Watson, Johnathan Falconer and our fan favorite, “The Mast Effect” David Mast. It will be fun!