February 21, 2015
comment
The Best of Utah Music showcases continued Friday night at 50 West Club, where Jay Citrus; Illwinded P; Dine Krew; Lost, the Artist; and Q1 hit the stage for this year's first rap showcase. Check out some the highlights of the night below.

Thanks to everyone who participated! Don't miss the second Best of Utah Music showcase happening at 50 West Club on Friday, Feb. 27, with Zigga, House of Lewis, Umang, Yze and New Truth.

Jay Citrus kicked off the night, quickly getting everyone's attention by repeatedly jumping off the stage and never standing still for more than two seconds as he rapped material from his latest album, Alone With Two Drinks.

By wearing a T-shirt that read "Fuck Sim Gill," Illwinded P made a political statement as he laid down tight, thoughtful rhymes from his latest album, Spirited Away Vol. 2.

One of the highlights of the night was Dine Krew's high-energy set. The crowd went nuts—which is really the only thing you can do when there's a bunch of merked kids wearing ski masks jumping around onstage. Dine Krew demonstrated impressive skill and devotion to the art of hip-hop, too, and that's one of the things that's so cool about this group: They almost too young to have this much soul, but do anyway.

Lost, the Artist got a lot of audience support for his set, which featured some live instruments and his unique style of raspy sing-rapping. Lost, the Artist has a lot of talent; his upcoming album, Lost Boy vs. the World, will be one to watch for. And it was interesting that his producer/drummer kept his back to the crowd—it made you wonder what trick he was going to pull out of his sleeve next.

Q1 put a lot of effort into the look of his show, including having his crew wear coordinating Q1 T-shirts and having two dancers do their thing while he rapped material from his latest album, To End Is to Begin. 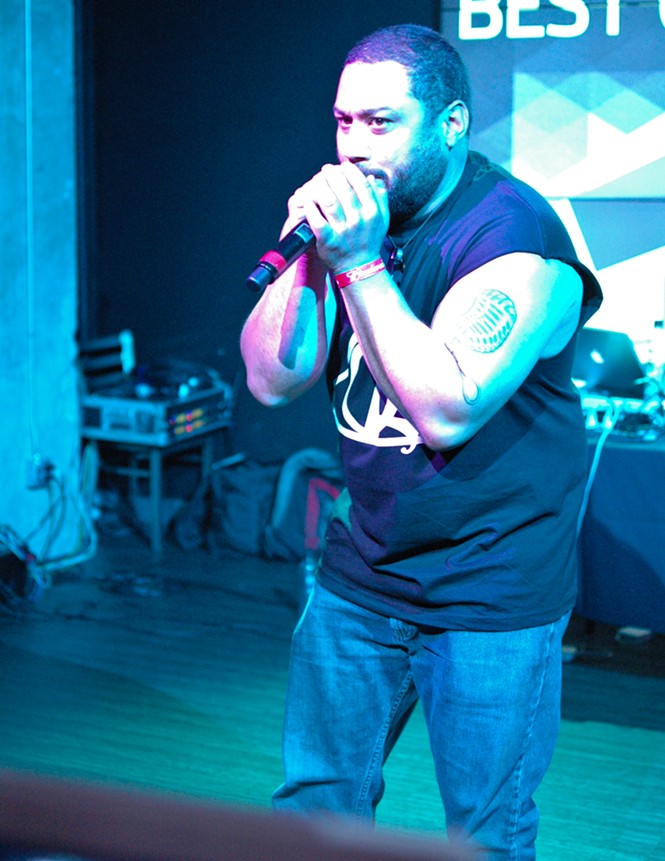 All photos by Josh Scheuerman