A preview of the upcoming SLC Slam Team Finals

This Tuesday, the Salt City Slam team will take over the Off Broadway Theatre in Downtown SLC for their Slam Finals. The evening of performances will help determine the finalists who will go represent Salt Lake City in the Slam Finals. The evening itself will also feature Chicago native and guest slam poet Tim Toaster Henderson giving a special performances before the finalists will pour their heart out on the stage for what’s sure to be a packed house to enjoy. Before the evening kicks off, we chat with SLC poet Gray Thomas about his career and thoughts headed into the evening, along with select videos of SLC performances for you to enjoy. 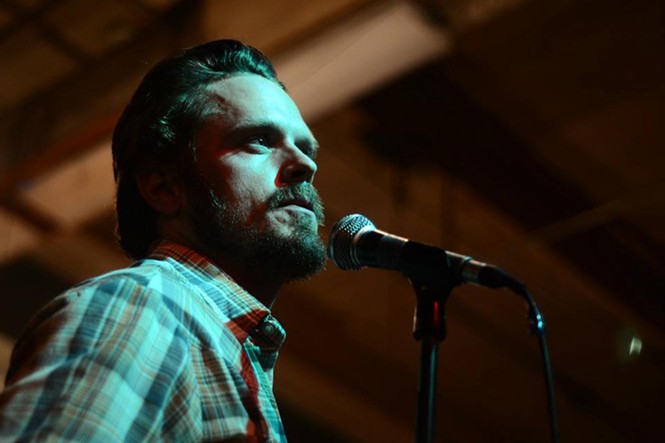 Gavin: Hey Gray, thing, tell us a little bit about yourself.

Gavin: What first got you interested in writing and what were some early influences on you?

Gray: Writing interested me from an early age, about 15 or 16 or so. My grandmother writes children's books, so I suppose that is where my curiosity with language begins. I guess I just liked being able to create my own worlds, make my own scene on though I wasn't very good at it. A lot of reading, and curiosity how language works, how others manipulate language in a way to create a piece is what really jazzes and continues to jazz me. My influences include a variety of things: Beat poetry, postmodern poetry, , pop-art, current world events and contemporary novels.

Gavin: What was it that specifically drew you toward poetry and slam competitions?

Gray: Poetry, and in general as I have discovered, is a way to control your reality. You can make a scene what you want, you can manipulate language and change meanings, you can expose the fluidity of certain structures. Poetry slams, back in the day when I started to go to open mics, were a bit of a novelty, a way to make the open mic more interesting, but no one took them as seriously as they take them now.

Gavin: When did you first start going to competitions as a spectator and what appealed to you the most about the genre?

Gray: I can't say that I have ever been to a poetry slam as a spectator. I attended [a couple of] the open mics at A Cup of Joe's in 2002 or so, and slam was just an extension of the open mic that we participated in just as a way to get another chance to read. That isn't to say no one took them seriously. A few would try to win to prove something. Jesse Parent was really the main impetus for pushing to make a serious event and scene, with the help of Morris , and Shae Sveniker. Jesse has stuck around since 2007 and has been a mainstay in the local and national slam community.

Gavin: How was it for you to start writing and what was it like breaking into the local slam scene?

Gray: I can't really remember starting to write. I've always kept a journal, and the line between the journal and trying to write poetry became blurred in my teens. Writing for slam is a different beast, though, since you are considering the live performance rather than the presentation on the page. That is the biggest challenge. As far as breaking into the slam poetry scene, I didn't really break into it as one might do now. I was part of the open-mic scene at A Cup of Joe's that became the slam scene in SLC. So, the pretty much knew me already. Breaking into the open mic scene meant pushing the boundaries of my writing and exploring certain uncomfortable ideas and concepts before the poets accepted me. Then, I had to drink a lot. I decided to take it seriously in 2010 to make the team to Boston because I had never been to Boston before. I imagine now it would be more difficult to break into the scene, given how much more experience the veterans have, and the boundaries they push in both writing and performance.


Gavin: What lessons did you learn from your first few performances?

Gray: From my first few performances, especially when I decided to take slam seriously, I would say that I learned that no matter how many drinks you've had, you're still going to be nervous, and the only thing that will make the nerves go away is by being up on stage as much as possible.

Gavin: What is the process like for you when writing a new piece and perfecting it for performance?

Gray: Coming up with a new piece is pretty difficult. I have strict parameters and rules when it comes to writing performance, which is mostly to stay conceptual. There a ton of concepts out there to play with, but only a few that are interesting in performance. So, I do a lot of free-writing, and lot of experimenting, a lot of failing, until I find a thread that I can follow until completion, and the audience is there with me when I perform it. Memorization and performance of the piece the final editing process, where I smooth out certain lines that might trip me up, or simplify complex lines in the piece. Then, if needed, I try to tap into the emotive aspects of the piece through vocal intonations and blocking. It can be a long process, and, also, it can drive me insane.


Gavin: What would you say is the most difficult hurdle to overcome for any piece you create, and how do you overcome that for the final performance?

Gray: The biggest hurdle is self-doubt. I tend to compare myself to my colleagues, who are very successful and very talented, which is terrible, because my process and goals are different from theirs. To overcome that, I have to keep reminding myself that it is okay to be a terrible writer, to have shitty rough drafts. I have to allow myself to get really weird at times in my writing.

Gavin: What do you think of the competition format and do you think it makes the work or the performers stronger?

Gray: The competition format has created a new form, like a sonnet or villanelle. Instead of a spatial form—it is a temporal form. Form dictates content. There's only so much one can say in three minutes (or whatever given time), so writers must adjust accordingly. Additionally, there is a tendency towards sensationalism in competition, as every performer trying to get the audience to gush tears and believe in God. I don't know if this makes them better writers (but that really depends on what one is looking for in writing). It certainly makes them better preachers.


Gavin: Over the years, what's been your favorite piece to perform?

Gray: The piece I perform the most is "Life in Reverse." This isn't necessarily my favorite piece, nor is it easy for me to perform. It's about a high school friend of mine who passed away due to a heroin overdose. Since writing it, I feel the need to perform it as a way of memorializing her.

Gavin: How has the '14-'15 season treated you so far, and who would say are the standout performers of the year from SLC?

Gray: The '14-'15 has been fairly interesting. A lot of vets of fallen away, notably Jesse Parent and DeAnn . These two have been stalwarts of the community for years. JoKyR as well as added a vibrant presence to the slam community for the past several years as well. My former teammate, Tami Porter-Jones, who was a necessary voice from the LGBTQIA community, doesn't compete anymore either. Those are enormous voids to fill, not only as far as talent is concerned, but also in community organizing. Nevertheless, we've seen some very bright and articulate that will grace the finals stage, such as Jose Soto, Selina Foster, Hannah Irene, Ashley Finley, and TaneshaNicole. This is diverse group of poets that will have some unique voices, and unique perspectives that previous finals stages have not been as keen to.


Gavin: This Tuesday will feature the Salt City Slam finals at the Off Broadway Theatre. What are your thoughts going into the evening?

Gray: My main thoughts are to put on the best show that I can. As organizer of this event, I am hoping to create a show that really interests and fascinates a new group of potential performance poets and supporters of performance poetry in Salt Lake City. Our feature, Tim Toaster Henderson, is one of the most unique performers on the national scene right now, and he is a perfect performer to grace the finals stage of Salt City Slam. I also realize that I am older than anyone else on the stage, and that at some point I will need to step aside and let younger voices be heard. So, while I am competing with all of my heart, I want to allow space for other voices.

Gavin: For those looking to get involved with slam poetry, what do you best recommend for them?

Gray: There are two slams in the Salt Lake Valley that can be attended. Signing up is open to the public. There is an open mic preceding the slam, so there isn't any pressure to compete. Salt City Slam is the last Monday of every month at Weller Book Works in Trolley and begins at 8 p.m. Sugar Slam is the second Thursday of every month at 's Coffees (2121 S McLelland) in Sugar House, begins at 7 p.m.. Another great place to start out is the Greenhouse Open every Sunday at Greenhouse Effect Coffeeshop, 3231 So. 900 E., begins at 7p.m.


Gavin: What can we expect from you over the rest of the year?

Gray: I am going to continue organizing the slam at Wellers, fundraising for both teams to get to the National Poetry Slam, writing grants, and workshopping with young poets in the community. At some point, I hope to actually write my own material as well.