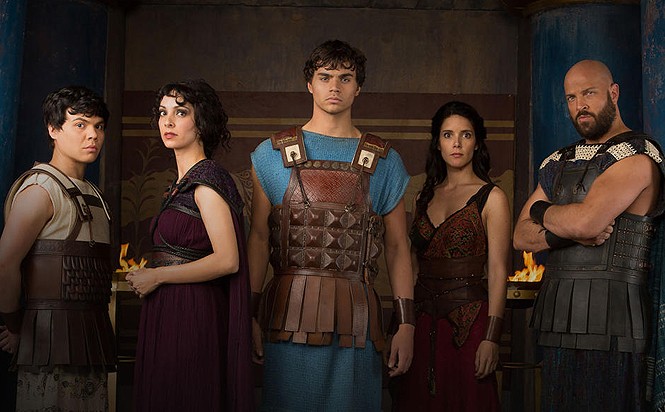 Olympus (Syfy) Series Debut: While it’s promising that Syfy is developing more original dramas than cheap reality shows these days, not all of ‘em are going to live up to the legacy of ye olde Sci-Fi Channel. Syfy’s new Greek-mythology soap Olympus may look like a Game of Thrones/Spartacus knock-off cast by The CW at first glance, but somehow it’s even worse than that: “Hero (Tom York) battles trickster gods, vicious monsters, seductive nymphs, kings and despots, as he transforms from fresh-faced naive into a ruthless, coldhearted killer, and match for the gods themselves.” Translated: “Pretty young actors—and Matt Frewer—emote their asses off in front of cheesy green-screen backdrops and effects in what should have been a two-hour movie, not a 13-episode series.”

Lip Sync Battle (Spike) Series Debut: Jimmy Fallon’s Tonight Show bit “Lip Sync Battle” was tolerable once or twice as a day-after YouTube distraction, but there’s no way the concept holds up as a weekly series. So of course it’s been turned into a weekly series—surprisingly, not by NBC, the network that could really use some quick ‘n’ easy programming right about now. Lip Sync Battle will run on Spike, the cable net known for Bar Rescue, Bar Rescue reruns and Bar Rescue weekend marathons, and be hosted by LL Cool J, the NCIS: Los Angeles star known for for starring on NCIS: Los Angeles. The celebrity lip-syncer roster is impressive, especially compared to obscurity parades like Dancing With the “Stars,” but I’d have much rather seen a series made out of Fallon’s “Celebrity Beer Pong.”