Talking hoodies and headwear with the company's founder

We may be slowly headed out of the chilly season, but that doesn't mean hoodies and headgear are totally out of fashion or not in style for the moment. Hell, the snowstorm and week of cold weather last week proved that. For those looking for your not-so-average hoodie, Utah proudly has & Co., making designer headgear that both keeps you warm and compliments whatever you may be wearing. Today we chat with founder and designer Simone Gordon about her line and where she plans to take her business. (All photos courtesy of HL&Co.)

Gavin: Hey Simone, first thing, tell us a little bit about yourself.

Simone: I'm a 23-year-old working artist that simply wants a chance to make it in the world by expressing myself through my craft. My main goal in life is to aspire to inspire! I want people to realize that they have the ability to do anything they want in life as long as they put their mind to it and are willing to work as hard as possible to get there. It's not easy, but I promise it's worth it.

Gavin: What first got you interested in fashion and what were some early influences?

Simone: Honestly, I've been involved in the artistic realm for the majority of my life. I've always loved creating and working with my hands; everyone around me has been consistently supportive of my dreams and aspirations. Music has always been a huge influence as well, which led to me attending music festivals and larger events across the US, thus resulting in the creation of & Co.

Gavin: Did you attend any colleges or courses to help you with your craft, or were you more self-taught?

Simone: I have definitely been more self-taught thanks to my wonderful grandma taking me under her wing before I hit double-digits, but I have also taken sewing and design classes since seventh grade and continued those courses throughout the more recent years. I've continued to broaden my knowledge by networking and meeting the right people who are just as motivated as I am to make it in the fashion industry and plan on continuing to do so throughout the rest of my life.

Gavin: What specifically drew you toward hoodies and headgear?

Simone: If you've ever met me, you know I basically wear a beanie or a snap-back every day, and if you haven't met me yet, now you know! I love having my hood up and rocking clothing that makes me feel unique, and I absolutely love making others feel like they look good while still being able to function in what they're wearing. Snowboarding has played a large role in the design aspect of everything I create, as well as the skate and surf lifestyle that I've been raised in. I want to take "street style" to the next level.

Gavin: What were some of your early designs like and how was it for you honing your craft?

Simone: I started out by making skinny, long, snow-oriented hoodies and vests, and I've still continued to make those as well, but I've been more focused on the hoods specifically as of the last 2-3 years. The hoodies and vests will be making a comeback in the next month or so though. 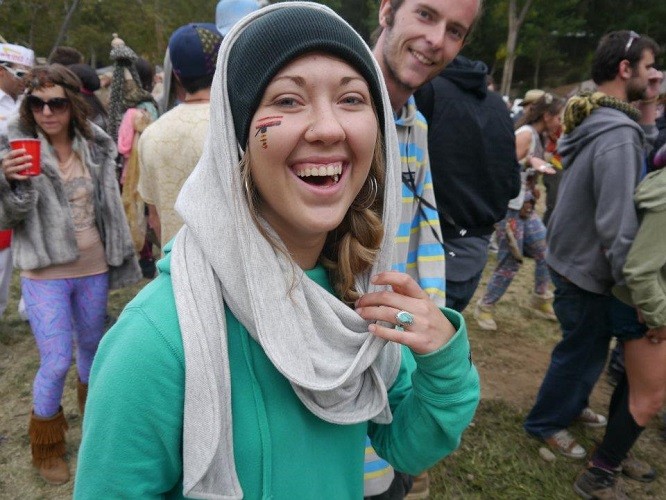 Gavin: What made you decide to form your own company, and where did the name come from?

Simone: At first I was making clothing and accessories for myself, then my friends started expressing interest in what I was doing, then my friends-friends started expressing interest, and now I have people from all over the globe that want one of my creations! It took a while to come up with a name that worked with every aspect of what I wanted this company's personality to be like, but once it was said the first time, I knew that & Co was it. I have to give the credit where it's due, to one of my best friends that helped decide on the name; James Ronnow. We discovered that the name I had chosen prior was already in use by someone else and had to go back to the drawing board, which is where HL&Co came into play. I wanted it to feel outdoorsy and gangster at the same time (aka the woodlands has now become because I'd rather be outside as often as possible over being stuck in a cubicle for the rest of my days).

Gavin: What was it like for you starting up and getting the business up and running?

Simone: It has been a fun yet process that continues to change and grow every day. I've had more support from all of those around me than I could ever hope for, and I can't wait to see what else the future holds for this company. There have been points in time where I've thought to myself "Why am I doing this? Should I quit?" Then quickly realize "NO! I AM NOT A QUITTER!" Even if this endeavor fails, I won't give up, and eventually I'll get it right, even if the first, second, and third attempt don't work out, there is no stopping me now!

Gavin: What's the process like for you when designing a new product for the line?

Simone: I used to make all of my designs out of large sheets of tracing paper until I finally got my new pattern making software, which has definitely made the creation of my newer products a lot more efficient. I'm inspired by so many things around me that I have to carry a small drawing book around in my pack as to not miss a chance to design something new.

Gavin: For those who haven't seen them yet, what are the major products you currently make?

Simone: My main focus has been on the hoods I've been creating (i.e; a hood with a chain, hood-scarves, and hoods that pull over your head to keep your neck and face warm while participating in winter sports or biking). However, there are many new products that will be coming out in the near future.

Gavin: Are there any other types of outerwear you hope to include or are you mainly focusing on these for now?

Simone: I am working on vests, jackets, harem pants, maxi-dresses, and hopefully launching a line of swimsuits at the beginning of next year. There is a large possibility that I'll be getting back into welding and jewelry making as well, but that has yet to be decided. The possibilities are endless at this moment.

Gavin: Do you do any custom designs or models?

Simone: Most of the pieces that I've put together over the last year have been custom; people tend to like one of a kind articles of clothing that they know no one else is going to have versus the same cookie-cutter stuff that you see people walking around in every day. I will be launching my website, Hoodlandsco.com, within the next week or so, but for now people can hit me up directly via e-mail or they can hop on the Facebook page, whichever they prefer, I'm pretty easy to get a hold of.

Gavin: Recently you got involved with the Rawards, what are your thoughts on the competition in SLC so far?

Simone: I couldn't be more stoked! I've been working hard on my newest line to make sure the show goes off with a bang, and the people I've been working with to make sure it happens have been SO MUCH MORE than helpful, I can't wait to show Salt Lake what I've been working on. I love that RAW gives unknown artists the change to show the world what they've got. I believe that it's events like RAW that help get the fire burning and give new artists that extra push they needed to reach out and get going.

Gavin: Where do you hope to take the company in the future, and are there any plans to expand?

Simone: The plan is definitely to expand and grow, whilst still keeping the core values I want this company to hold up-front. I want to keep the company as green as possible, and I'm excited to continue to expand throughout the west coast over the next year. I will also be launching my Kickstarter campaign within the next couple of weeks to hopefully help make all of this possible.

Gavin: What can we expect from you and the company over the rest of 2015?

Simone: I have been working on a handful of collaborations with different artists here in Utah such as Isaac Hastings as well as a few others from California and Nevada such as The Burning Artist Collective and Mind Honey. You'll be seeing a lot more from & Co within the upcoming months, and I cannot wait to show you all the greatness that has been unfolding in my workshop!