A look into the awesome musical brew blog

One of the cooler local blogs that been gaining some steam over the past year has been Brews and Tunes. The blog is pretty basic in that the author, known to readers as The Meista, will pair a regionally-brewed craft beer with an album of their choosing, so you are able to obtain the best experience out of both. The blog itself goes into rich detail, more than you'd find on company websites or liner notes, and ultimately challenges readers to try new music and beers they might never have explored. Today we talk with Victor Maritsas, The Meista behind the blog about the time he's run it and where he plans on taking it. (All pictures courtesy of B&T.)

Gavin: Hey man, first thing, tell us a little bit about yourself.

Gavin: How did you take an interest in music and essentially becoming a knowledgeable expert in several genres?

Victor: I'm not sure if I would consider myself an expert, but I've always loved music. I remember walking around my neighborhood in the mid-'70s with this little green transistor radio I had, rocking out to Pink Floyd, Boston, Judas Priest, Queen, etc. I'm a bit of a music junky to be honest. I obsess over bands/musicians and want own everything and to know who and what inspired them. I own far too many albums, but I keep on buying and discovering new music.

Gavin: What would you say is your favorite genre to listen to and why?

Victor: I like a lot of different styles of music, but I absolutely love hard rock and metal. There is just something about the energy, musical prowess, and the sense of community that comes with the metal scene. I don't think you get that with other genres. I also think many metal musicians out there now are infinitely more talented and honest than so-called artists in a lot of other styles of music.

Gavin: You're also quite the expert in local and regional beers. When did that interest begin to take shape?

Victor: I guess it started in college. I was at a party and someone had a beer from a new, local brewery. It was a Uinta Cutthroat Pale Ale if I remember correctly. It completely changed how I saw and drank beer. I became very curious about the craft industry and artisan beer in general at that point. I have a strong belief in supporting local business, especially when they produce quality products. I think we are very lucky to have a thriving craft brew industry here in conservative Utah, especially with the absurd laws and mismanagement of the DABC. I want to support and continue to see the local industry grow.

Gavin: Over the years, have you found yourself appreciating the local selection more or do you feel like the northwest has a better choice overall?

Victor: I think with the boom in the craft brewing industry as a whole, we are seeing a lot of great things take shape here. As it becomes more competitive, the local breweries are experimenting more and producing some really quality products that I think stand up well to the beers coming out of the Northwest and California. Also, the Utah Brewers Guild has done an outstanding job supporting local brewers and building a strong brewing community, which in turn has helped push the creativity I believe.

Gavin: How did the idea for your blog come about?

Victor: It really started as a lark to be honest. I found myself posting pairings on my Facebook page on the weekends. My wife's aunt thought that it was a clever idea and convinced me to start blogging. I didn't think it would last, but here I am still going with 2,200+ readers. I was heavily inspired by the wonderful Utah Beer Blog—Mikey is an encyclopedia of craft beer knowledge, cares deeply about the local brew scene, and is just an all-around damned nice guy! He's been really supportive and has even contributed to several pairings.

Gavin: When you start a post, do you go with beer or music first before pairing?

Victor: It kinda depends, I think it usually starts with the music but is also dependent on what's currently in my refrigerator or what new beers are available at the liquor store, Beer Bar, The Beer Hive, or The Bayou. I order a lot of CDs from Kevin Kirk at The Heavy Metal Shop, so when something new comes in, I tend to seek out a beer to pair that week that I think fits the music.

Gavin: Do you experiment and try different combinations, or do you try to make the original combo make sense?

Victor: I do experiment quite often, but I have certain styles of beer that I like to pair with certain genres/sub-genres. I do force pairings sometimes, but those don't always work out well. I usually try to pair based on my own criteria, as absurd as that sounds. For instance, I think stouts and porters go really well with doom metal/stoner rock whereas IPAs lend themselves well to thrash metal and power metal. I tend to pair big, complex Belgian-styles with more progressive rock and/or symphonic metal. Again, I realize how silly this all sounds, but when you couple music and craft , and really examine them both as a pairing, the music and drinking experience can become rather interesting. I find myself discovering more about the music and the brew.

Gavin: What's the reaction been like to the blog from readers?

Victor: It has been really positive. I think my readers realize that it is somewhat tongue-in-cheek, but see the fun in it and hopefully have learned a thing or two about certain brews, styles of beers, breweries, and/or bands. A few of my readers now send me what they are pairing too or send in requests, which is great! 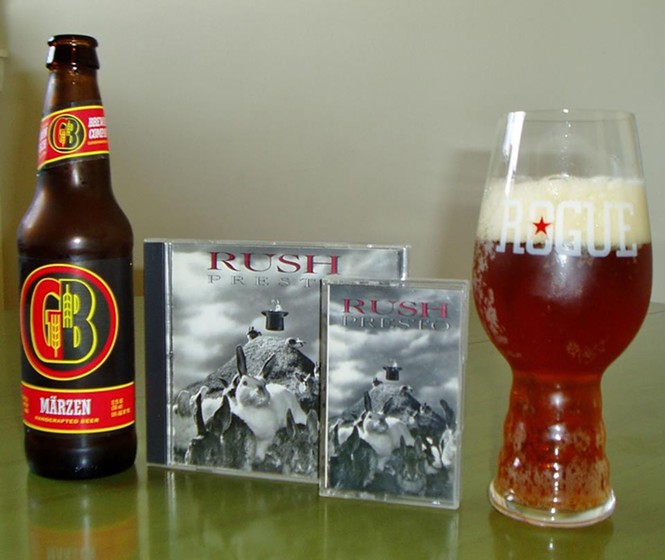 Gavin: Have you heard from any of the breweries you've featured, or worked with them at all, or is it more of an independent thing for you?

Victor: Yes, I have had some really good feedback from several breweries and a few have even retweeted my pairings on their own pages. Hopefully, I will be able to do some pairings on-site with some of the local brewers. My blog can be a great source of free advertising!

Gavin: You've had the opportunity to do a couple of guest spots and interviews. Are you looking to incorporate more of those down the line?

Victor: Yes, I'm hoping to get more interviews posted. I have a few pending right now. I've been really lucky in that I've interviewed some pretty amazing people over the last few years like Michael Dean Damron, Katon De Pena of HIRAX, Matt Barlow of Iced Earth and Ashes Of Ares, and Bonnie Buitrago of Nashville Pussy. I think the interviews are far more interesting than any of my pairings to be honest. I wouldn't mind doing some on-air pairings as well though. I've done that once with Maximum Distortion on KRCL. It was great fun and really helped boost my readership as well.

Gavin: You're going on over four years worth of posts at this point. How does it feel for you to have this blog last this long when so many die off in short order.

Victor: I don't make any money off my blog; I just do it for the love of beer and music. I guess to some degree that's probably why I'm still going. I also realize how ridiculous it really is as well and have come close to quitting a few times, but I have a pretty strong core of readers and I feel very loyal to them. I really enjoy talking about music and craft beer so it is nice to have an audience that loves beer and music as well.

Gavin: What do you personally hope to achieve with the blog as it continues?

Victor: Good question! I'm not really sure, maybe just to continue meeting metal and craft beer fans. I also hope I can help support the growth of local brewers and the craft beer industry.

Gavin: What can we expect from you and the blog over the rest of the year?

Victor: More of the same absurdity really. Hopefully, I'll continue to interest people in all the great craft beers out there as well as some cool music. You can check out Brews and Tunes on BlogSpot, on Facebook, and on Twitter.