If you're not familiar with The Bad Kids Collective, now is a pretty good time to get acquainted with the group and their performances. The group comprises many of SLC's talented LGBT performers for evenings that are more than just your average drag show. The group has taken whatever remaining boundaries existed in the past and bulldozed over them with higher-concept art and challenging themes. Ultimately trying to reach the goal, in their words, of “utilizing gender integrated style, and imagery to convey a message of empowerment and understanding of the need for community.” Today, we chat with the kids themselves about forming the group and how things have been the past three years. (All photos courtesy of TBKC.)

Cartel: We are sort of like magic queer Clark Kents and Selena Kyles. We all have day jobs like coffee shops, graphic designing, nannying and managing retail stores (to name a few). But we all share the common interest in creating personas, playing dress up and having a good time in a space where we can be whoever we want to be. The duality that many of us seem to possess has certainly given us common grounds for tight friendships. Many of us grew up in small towns and were raised conservative though a few of us were raised liberal and encouraged to be ourselves. The backgrounds vary quite a bit from person to person. 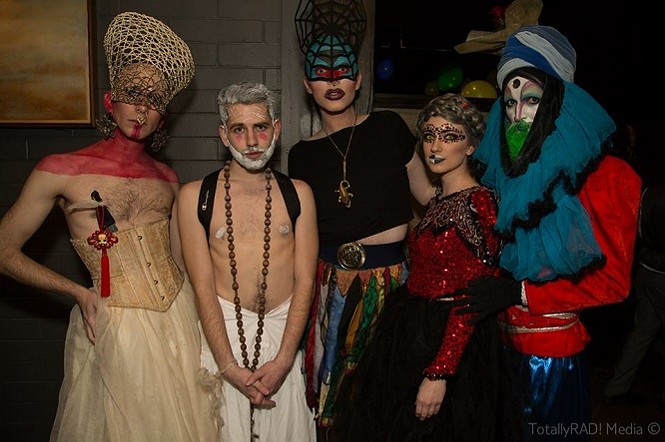 Gavin: The group is described as “a community of queer artists,” so to start, how was it for each of you growing up (in Utah, or wherever else some of you may be from) in a less-than-stellar LGBT environment?

Cartel: Klaus and I (two of the four original members) grew up in central Utah in tiny towns but met in high school where they formed an inseparable bond. Childhood was certainly not always easy in a place like that, being a couple gay weirdo kids. We could tell plenty of stories about how horrible it was, but let's not focus on the shit parts, eh? We definitely had a very similar group of weirdos as we do now, but we just didn't perform in bars together back then!

Gavin: As you grew up, what caught your interest in entertainment and what were some early influences on you?

Cartel: Many of us have in common the fact that something from pop culture that we might actually hate now (or perhaps it's something you still love, like Bjork, a great example of someone many of us idolized who has continued to grow and change and remain interesting over time) inspired us in some way, to perform. I really loved Lady Gaga when she first came out because she represented this strange unexpected world because she was so weird. But eventually, it all started to feel very and almost scripted by someone other than herself. 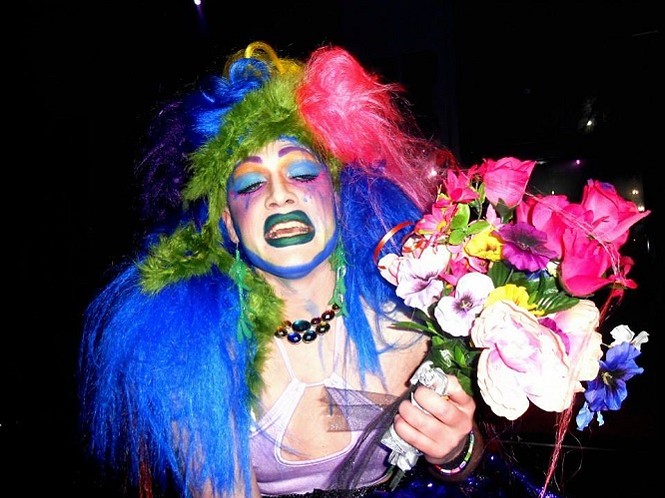 Gavin: How did each of you take a preferred interest in drag performing, and what was it about the genre that you enjoyed?

Cartel: The desire to go out dressed up in costume and "shock" people definitely became a fantasy around the age of 14 for myself. Seeing the club kid style "drag" that was so outlandish and bizarre and fashion forward definitely inspired!

Gavin: How was it for you first learning how to do it and working to perfect your talent?

Cartel: Many of us recall the beginning days, thinking we were super fierce but actually, we looked like total garbage, which, can be a style, you know! 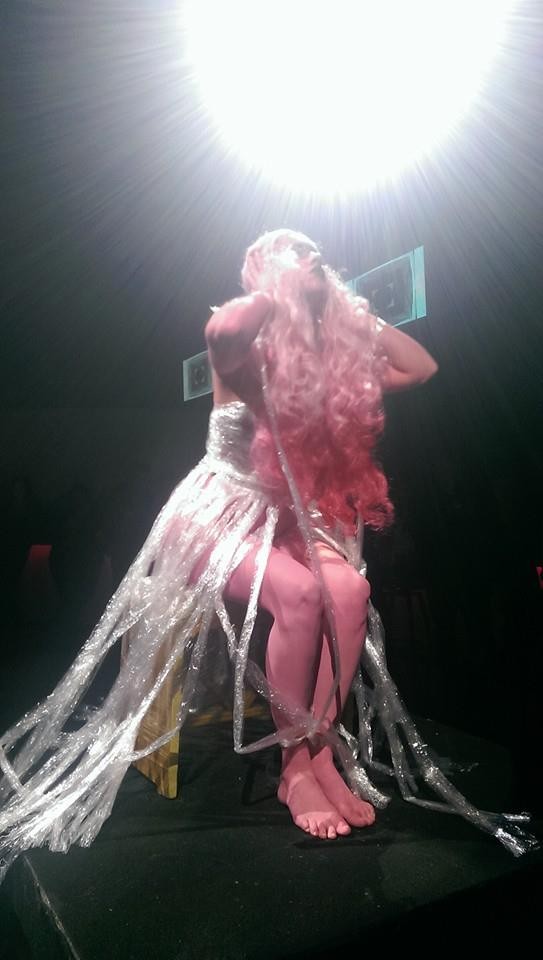 Gavin: When did most of you first meet each other and eventually become friends?

Cartel: Around the time of Miss City Weekly three years ago when Willard Cron won the crown, Klaus was helping me in the dressing room and Lamia (another founding member) was also competing. The four of us definitely each brought a different friend group to the table and altogether the collective just grew and grew like a ripple impact.

Gavin: When did the idea of the Bad Kids Collective come about, and where did the name come from?

Cartel: My song that was selected if I won Miss City Weekly was "Bad Kids" by Lady Gaga. The song [is] about being a rebellious teenager basically, and at some point in time, I remember hearing somebody say that we were just absolutely terrible queens, because of our signature making-fun of beauty standards aesthetic and approach to a once-ruled-by-beauty-queens style of entertainment. So we booked a show as a group after we met at the awards, and the club asked what we were called. The name happened because the lyrics in that song perfectly described how I imagined that people viewed us. So it was definitely a way of owning it and saying "fuck you" to hateful people. 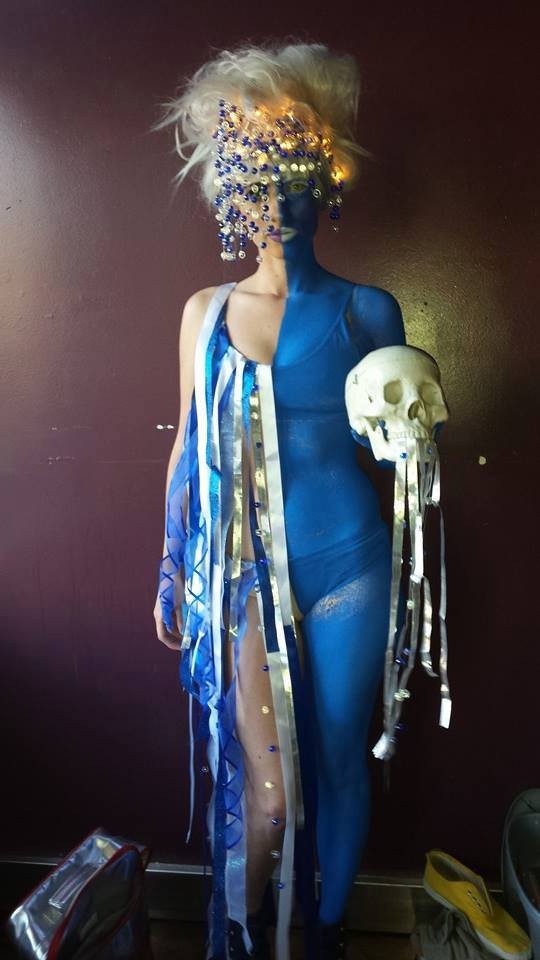 Gavin: I read elsewhere that part of the idea in forming your group was to challenge everyone's idea of drag performance. For those of us not educated in it, where does the misconception lie?

Cartel: People very commonly think that drag just means "a male assigned at bodied male, impersonating the female body/presenting this illusion." But really, drag can be so many different degrees of exploring gender: male, female, interwoven entities of both, or sometimes even this otherworldly non-gendered creature.

Gavin: What was it like forming the original group and coming together to create these performances?

Cartel: We were definitely doing some super off-the-wall and very punk rock performance in the beginning. Bibles were destroyed, there was plenty of fake blood and the occasional anti-patriotism protest piece in heels. The Bad Kids were totally hell on heels and people were pissed about it. Things have really come far since then, and I think the approach is much more conceptualized and creatively thought out. Instead of in your face, but it's still carrying a heavy message a lot of the time. 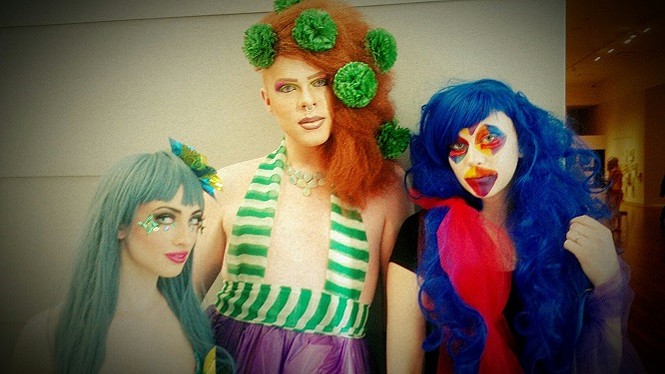 Gavin: What was the initial reaction like, not just from the LGBT community, but local entertainment as well?

Cartel: It varied. People don't seem to have neutral opinions about us. It's either an absolute adoration and respect, or they think we're the scum of drag.

Gavin: When did you eventually take up residence at the Metro Bar, and how has it been having it be your home?

Cartel: We did two shows at the Paper Moon immediately following Miss City Weekly, when Michael Elliot, a bartender at Metro bar reached out to us and encouraged us to come perform at Metro on a Thursday night, the alternative playground for weirdos DJ'd by Jeff Hacker. So we did one show, with Princess Kennedy as our emcee, and the crowd fell in love with our madness (I think). So we were invited to become a regular fixture. It's been a rollercoaster for sure, as I'm sure working at any bar is.

Gavin: What's the process like for you as a group to create a single show, from ideas to final performances?

Cartel: We have meetings almost every Sunday night and people bring ideas to the table, things are reviewed and discussed as a group and then we as individuals often come up with our performances and then run them by each other to polish things up. It's quite a process, but it's a lot of fun for sure. There are often about 15 people involved in making one of our events happen.

Gavin: I was told once that sometimes you go for appearances that fit the piece, but sometimes you dress up to simply shock the crowd. How do you make the determination of what you will appear like on stage?

Cartel: I think we've all grown away from simply shocking people. If a performance you see from one of us comes across as shocking, it's probably a sign that you should stop and ask yourself whyit shocked you. We often touch on subjects that are really heavy or sensitive, but not in a way that we are making a mockery of something delicate, but more so provoking the conversation or the thought train within people, so that they may question why something makes them feel a certain way. An example, I did a performance piece with religious symbolism that ended with her pouring blended up dollar bills and fake blood onto the classic Pietà image of Jesus and Mary, symbolizing how religion and capitalism have caused so much bloodshed. So, some people were upset but some people found that they agreed with the idea.

Gavin: You're coming up on three years as a collective. How has it been running it for this long, and who are the current members to the group?

Cartel: There are quite literally over 30 people right now who are an important part of this entity. I don't even want to accidentally miss someone so I'll just say, I believe we keep running so smoothly and growing together because it's an environment with of love.

Gavin: What have been some of the most memorable shows you've put on during that time?

Cartel: We once did a show called "American Ghoul" that was our first super politically charged event, during the elections, our show called HELL was a ton of fun and the launch of our monthly parties called "6" that are a sensory-driven experience was a debut I don't think any of us will ever forget because it marked a very special moment where we became solo as a party/event instead of just performing at other people's parties.

Gavin: What are your thoughts on how Utah has grown in the LGBT community?

Cartel: It's definitely been great watching some key people in the community on the front lines making a difference and fighting for their/our rights. But there's a resistance within some of us who identify as Queer, or just some of us in general, to the homogenization and normalization of homosexuality. The culture and the magic of being queer that places like San Francisco have had for a very long time: We still don't quite have that mindset, but it's slowly getting there.

Gavin: After the show, what can we expect from the Bad Kids in 2015?

Cartel: We are planning a West Coast tour, and I think you'll definitely see more side projects like art galleries, short films, music projects ... etc. It's a huge goal of ours to integrate and mingle with other artists in the city and establish ourselves as a performance artist collective, beyond drag, beyond gay clubs. A legitimate creative force to be reckoned with.