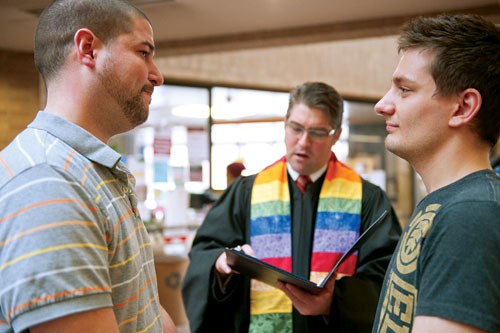 According to Brad Dacus—yes, the  Brad Dacus, president of the Pacific Justice Institute, if you please—today's glorious decision by SCOTUS is nothing less than an outrage: “Today’s decision is an unmitigated disaster for democracy and constitutional interpretation. Justice Kennedy did not even attempt to explain what level of scrutiny he was relying upon to invalidate state laws that reflect the millennia-old marriage tradition.” [Emphasis added for ridicule.]

Sounds like Dacus is having a terrible, horrible, no good, very bad day. Well, I can relate.

I was reminded of the way I felt every time the gay-marriage issue reared its ugly head back in the bad old days before we had nationwide marriage equality (woot-woot!). The issue seemed to come in waves, and whenever it did, LGBT folk were hit with a stunning barrage of blame, shame and complaints that made it sometimes difficult to get out of bed in the morning. For instance, when the issue came up during the 2010 midterms, I wrote:

So, for about a week, I become one of those pathetic characters in a Cymbalta commercial. ("Where does depression hurt? It hurts right here, motherfucker!") Each day I'm reluctant to read the Public Forum sections in the dailies — which are normally my favorite — because I just know they will contain two anti-gay letters denigrating homos in the most contemptible terms, four pro-gay letters explaining again why the Constitution protects minorities, and one letter lambasting the paper for its bias in failing to include more anti-gay than pro-gay letters in its Public Forum section.


Not to gloat, but now the shoe's on the other foot, homophobes.

Today is a great day. For the past several weeks, I've been pretending that I didn't really care about the outcome of the Supreme Court case, because the future seemed so uncertain, and I half suspected that the court would rule against my family and others like mine.

But, when I heard the news of the 5-4 decision as I was driving to work, I had to pull over for several minutes because ... well, we'll just say it became difficult for me to see. I leaked about a quart of eye fluid.

It's a rare victory, and nothing less than a defining moment in our nation's history.