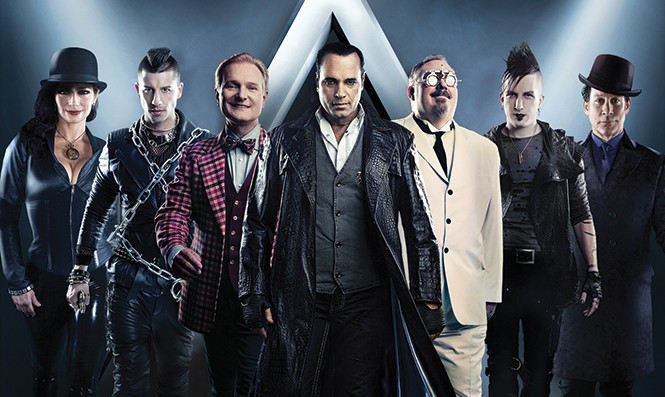 It’s a crying shame when Utahns get taken in by politicians and con artists. But there are times when Utahns actually enjoy being bamboozled, especially when those doing the bamboozling are seven skilled performers known as The Illusionists, magically appearing through June 28 at the Capitol Theatre. If you enjoy classic magic tricks and feats of wonder performed by the next generation of magicians, this is where you’ll want to be.

Each performer has a moniker (The Inventor, The Futurist, etc.) and a distinct persona to go with it. You can’t help but be impressed by their authenticity, with each bringing a dash of humor, or a smidge of the macabre, or aura of mystery, often with dramatic music and even the sound of a heart beat at more perilous moments (yes, there are also live musicians onstage).

“The Trickster” Jeff Hobson’s kept things light, channeling the campy wit of Liberace, all while making off with an audience member’s wristwatch. Then there was the mad professor (Kevin James, “The Inventor”) who cut a body in half with a chainsaw. And a Marilyn Manson lookalike (“The Anti-Conjurer” Dan Sperry) who educated the audience on a dodgy brown-paper-bag version of Russian Roulette. What about that life-size locomotive engine appearing onstage out of the blue … I don’t want to give away all the surprises but sufficed to say, there’s never a dull moment.

The highlight of the Wednesday night show was naturally “The Escapologist” Andrew Basso performing Houdini’s Water Torture Cell trick. He was dunked headfirst into a water-filled glass cabinet, manacled upside down by his feet. In full view of the audience, he managed to pick the lock on his handcuffs as well as the lock outside the cabinet with a paper clip and emerge gasping for air after three and a half tense minutes. (I tried holding my breath while he was under water and lasted for 45 seconds.)

In contrast to Basso’s high-stakes feat was “The Manipulator” Yu Ho-Jin’s meditative card tricks. Named the 2014 Magician of the Year by the Academy of Magical Arts, Yu Ho-Jin’s elegance and calm while making cards appear and disappear (all while a TV camera pulls in tight on his moves) was simply captivating.

The show is a nice balance of old-school magic with modern bells and whistles, but it somehow avoids coming across as a polished, overproduced David Copperfield spectacle. However, there were times when more attention to technical production would have been nice to have. For instance, it was hard to hear or comprehend some of the performers. Perhaps the Capitol Theatre sound technicians can work some of their magic for subsequent shows.

If you like being tricked on your own terms, by sleight of hand and card tricks, flying birds and arrows, spend some time with these gents while they’re in town. It’s two hours of fun and curious moves—basically, it's just how we like to be fooled.