Every Thursday night in Ogden, over at the Lighthouse Lounge, you'll be able to find a music event that, surprisingly, doesn't happen too often around Utah music venues. Ogden Unplugged is an acoustic showcase where local musicians are given the stage to perform solo showcases in an intimate setting. The series has primarily featured artists and bands from around Weber County and surrounding areas, giving them an entirely different venue to get their names out. Today we chat with the guy behind the evenings, Jon Turner, about starting the series and the impact had on local music. (All photos courtesy of Facebook.)

Gavin: Hey Jon, tell us a little bit about yourself.

Jon: I was born in and have lived here for most of my life. With the exception of a few brief attempts to make my escape, I have always found myself drawn back here to the mountains.

Gavin: How did you first take an interest in music, and what were some favorite acts of yours growing up?

Jon: One of my earliest memories, and a pivotal moment in my becoming a musician, is of my father asking me what band I would want to see play if I could have my choice. I said the Beatles, whilst "Rocky Raccoon" rattled through the house in the background. He said sorry, and that we couldn't because John Lennon was dead. And immediately went into the vast conspiracy theories surrounding his death. To which I impatiently replied, "No, he's not. He's right here singing in the radio." I didn't quite understand it then but, in hindsight, as a child I imagined making music [as] a form of magic. And that fact that the music could be captured and listened to again and again on records seemed like the only way to actually achieve immortality.

Gavin: What was it like for you breaking into the local music scene?

Jon: It seemed much easier when I was younger... like most things, I guess. But honestly, I'd have to say it was rough! When I started playing out again, and trying to network with other semi-established musicians, I was met with arrogance, indifference and swift dismissal. After taking a break from that band game for a few years during a dismal attempt at conformity to the 40-hour work week world, I had tried to get back into the swing of things by going out to the local shows and open mic nights. Surely there I would meet some talented like minded people to start a new project with. After literally months of showing up early and staying out late, I was always next on the list or up after this guy and then my buddy is gonna do a set. And like clockwork, the night would wind down and end without my playing a single note. On one of these nights, fueled by whiskey and sheer spite, I decided to start doing my own shows again. I convinced a friend who played drums to get on board. We sold everything we had that we didn't need, purchased some proper equipment and began work on the project that has now evolved into The Highway Thieves.

Gavin: How has it been for you performing with that group and being a premiere act in Ogden?

Jon: Like many bands, The Highway Thieves began as a labor of love, and has proved to be far more sweat, blood and tears than any of us could have ever imagined. Over the past four years of growth, setbacks, changing members and making music, we have encountered every imaginable hurdle in the road. And each time I thought for sure that we could go no further, we have risen to the challenge, put our heads and resources together and found clever and creative solutions to problems that would be the undoing of any band I have worked with previously. I am deeply honored for the privilege to know these guys, let alone being able to play with them every night! As a songwriter and a front man, you depend on your band to inspire you to the levels of performance that you are not able to access alone. To put so much energy out that you can't stop yourself from being swept away in the current of energy. These guys give me that edge time after time. There is never a dull moment. We love Ogden and can't thank the folks here enough for all of the support and crazy love from day one. We will never be that band that is too cool to play their hometown.

Gavin: How did the idea of Ogden Unplugged come about?

Jon: Ogden Unplugged came about as the antithesis of Tuesday Fam Jams, which was an entirely open jam hosted by myself and Chris Agulair every Tuesday night at the Sand Trap: the full band setup complete with PA, 4 mics, two guitar rigs, bass, full drum kit and whatever you wanted to add into the mix whenever you wanted to add it. Which ideologically, in its purest form, is a beautiful idea! However, in reality, it tended to be far trickier to handle than we planned. This philosophy required a lot of tact, listening and cooperation on the part of each musician to make it musical. There were a lot of nights where, towards the end, it would be chaos. However, ... some of the best music I have ever heard happened during those jams. When no one knows where they're going but everyone still gets there at the same time, it is a beautiful thing. So, long story short, I wanted to do another musical event for the public.

Gavin: What made you decide to hold it at the Lighthouse Lounge rather than a traditional music venue?

Jon: I wasn't aware that there was a traditional music venue in Ogden that would allow events like these. At the time that I was seeking sponsors and shopping venues, the Lighthouse was the closest thing to a venue that supported local music in town.

Gavin: For those not familiar with the concept, what are the rules for people playing an unplugged show?

Jon: The format is acoustic open mic from 7 p.m. - 9 p.m., followed by a different featured band or artist each week. Anyone can play the open mic. I bring all of the equipment, so you can just plug in and play. I also make my personal guitar available to those who may not have one or forget to bring it out.

Gavin: What's the process like ,when choosing a band or performer to come play?

Jon: There is a mixture of bands sending emails and messages asking to play and myself hunting for great bands from Utah and other awesome bands that may happen to be touring through as well. As any booking agent will tell you, your DPK is key! I can't say it enough. So many bands competing for gigs that have all of the proper tools. Links to current music online, band photos, short bio, list of past gigs/accomplishments, links to all the necessary social media (which every booking agent checks). This is your musical resume. If you don't have one, or don't have all of the required parts, you will be passed over in favor of another band who has put all of the right things together in one place. No booking agent is going to hunt around to check you out unless your shows are stirring up a lot of word of mouth buzz. These things are used to assess a band's potential draw, and help the booking agent know where your music will work best if it will work at all.

Gavin: What were the first few shows like to put together, and what did you think of the audience reaction?

Jon: I had a great show of local support with great local acts like Simply B, Barbaloot Suitz, In the Deep and Rick Gerber coming out to play. It all came together really nicely, and people were excited to have a reason to get out of the house and see some live music on a Thursday night.

Gavin: After a couple of weeks, did you know it would be a mainstay, or was it touch-and-go for a moment?

Jon: It was a hit right off the bat, but I didn't know if the owners would continue to support it. The bar business is fickle, so there was a lot of pressure to keep attendance high or face finding another venue or calling it quits. 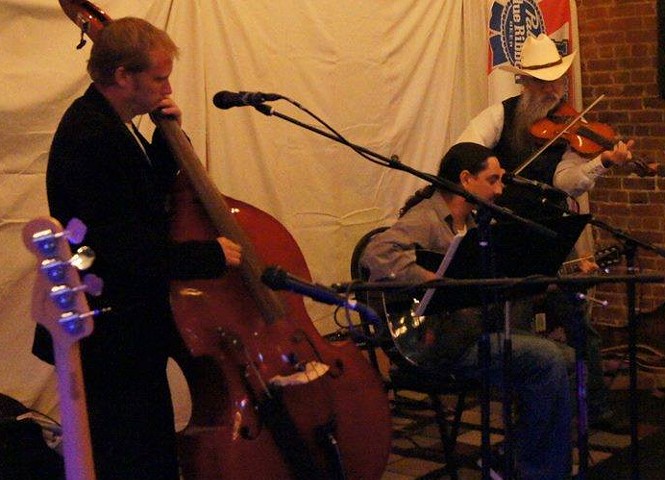 Gavin: How has it been for you working with a variety of local talent and giving them a night to perform?

Jon: I have been so fortunate to meet all of these beautiful people! I knew a lot of musicians around before, but it has opened my eyes to just how much music is being made in Ogden daily. I had no idea. It is a good feeling to see people coming together ... specially when someone you have a lot of musical respect for invites you up on stage to sit in, which has happened more times than I can say. And everyone has been really easy to work with, and grateful for the chance to play.

Gavin: Do you have any plans down the road to start recording or filming these for the public to check out who can't make it to the Lounge every week?

Jon: Bryan Smith, of Only In Ogden and Ogden.Rocks fame, photographs each event and we have had people film and offer to film weekly. It would just have to be the right fit. Not opposed to the idea at all, however.

Gavin: Tell us about the shows you have coming up over the next couple months.

Gavin: What can we expect from you and Ogden Unplugged over the rest of 2015?

Jon: It is safe to say that I have simplified a lot of my life, and my son has changed my world for the better a trillion fold! Rededicated and more focused and determined that ever. 2015 will be cranked up to 110 percent. Pure, unadulterated, unpasteurized, auditory awesomeness!