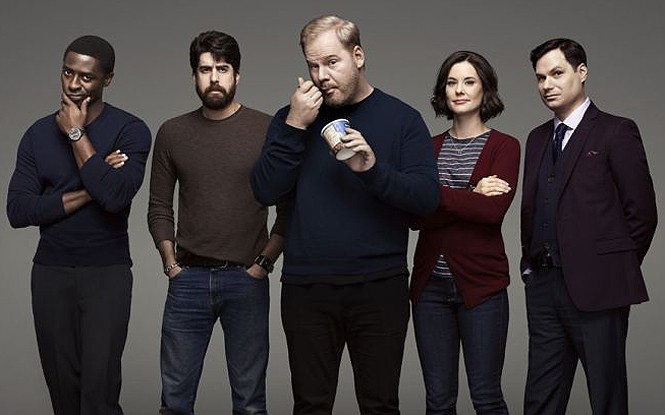 The Jim Gaffigan Show (TV Land) Series Debut: Darren Star's Younger, which premiered in the spring, was TV Land's first toe in the rebranding water as the retro-network dumps Baby Boomers in favor of Gen-Xers (can't keep catering to a demo that's almost extinct—unless you're the GOP). Laugh tracks and cheap sets are being replaced with single-camera film and a snarkier attitude, and The Jim Gaffigan Show is a far more gentle bridge between the two than Younger was. If you've seen Gaffigan's stand-up, you know what he and this sitcom are about: Tubby white guy who tries to do right by his wife and kids, whom he tolerates as much as they tolerate him—oh, and he loooves junk food. If you already like his all-inclusive comedy, The Jim Gaffigan Show won't do you wrong. For slightly more edge, stick around for ...

(TV Land) Series Debut: Michael Rosenbaum (Smallville's Lex Luthor) plays a hard-partying gambling addict who, to escape thugs and loan sharks, assumes the identity of a new pastor who was supposed to take over a small-town parish—and he later learns that the no-show Craiglist hire is also gay, hence, wackiness. Despite the deep-cheese setup, Rosenbaum sells Impastor with rogue-ish charm and some surprising comedy chops. Funny pilot, but will it hold up for nine more episodes? It had better—TV Land has to fill those Dukes of Hazzard slots with something.