The SLC bicycling community has been seeing a lot of support in the past year. And I'm not talking about just adding green lanes or throwing in the occasional perk to getting around town easier; we're talking having new shops owned and run by committed cyclists who want to see the community grow and thrive. Crank SLC has become a centerpiece for bicycles in downtown SLC, helping give riders a one-stop-shop for all their needs while also giving them affordable choices from Loki and nationally owned brands. Today we chat with the co-owners about the shop and their thoughts on SLC's cycling revolution. (All pictures courtesy of Facebook.)

Gavin: Hey Christian and Juliet, first thing, tell us a little bit about yourselves.

Christian: Juliet is 29 born and raised in Salt Lake City, I’m 31 and moved to the city about five years ago. Prior to Crank SLC, Juliet worked mostly in the service industry, including Sapa. I was a project manager for a heavy civil construction company in Phoenix. We have been together for a little over three years.

Gavin: What first got each of you involved with cycling and how did it develop beyond a hobby?

Christian: I have been a cyclist my whole life: BMX when I was young, then mountain, then road, then track bikes. After I left Phoenix and moved to Salt Lake, I took an incredibly fun part-time job at the downtown Jimmy John’s on Broadway, delivering sandwiches by bike. That was the first time cycling became my business.

Juliet: Growing up near the hills behind the Avenues, I was involved with cycling in my youth, mountain biking every summer. I was a very active and athletic child, and grew up that way. When I met Christian, and he started Loki Cycles, I really fell in love with it. Learning the mechanical parts and being active on a bike in the city was awesome. I loved the fusion of urban living and biking, and I could finally be on a bike I enjoyed riding and looking at.

Gavin: What have been some of your favorite bikes you owned growing up?

Christian: The first bicycle I remember was in the early '90s, and was called “The Sledge Hammer,” by Huffy. It had front suspension and I thought it was the coolest thing ever. After that I moved into dirt jumping and bought a GT Dyno. That’s when I really started working on bikes and modifying them to better fit my needs.

Juliet: My first bike was by Huffy. Baby pink frame with baby blue fenders, and it had “Dream Girl” printed on its white chain guard. Then I’d have to jump to the road bike handed down to me from my father. He brought it over from France and gave it to me a few years ago before he moved. A gold 1973 Luis Ocaña road bike. It is a thing of beauty.

Gavin: At what point did you each start working on bikes for a living?

Christian: My first job working on bikes was when I started designing my first bike for Loki Cycles.

Juliet: I started working on bicycles with Christian, by helping him build bikes for Loki Cycles. I was really just assisting, but I was able to learn about all of it working on the bikes that way with him. Now I can do a lot more than just pump up a tire.

Gavin: What was it like working on Loki Cycles and bringing that brand to life?

Christian: Working on Loki Cycles has always been a lot of fun and very challenging. It is not an easy thing to start a bicycle brand with next to no money, renting out your friend’s garage. But it was always such a fun project that all of the difficulties never seemed to matter so much. Fortunately, we did have some success selling our bikes right away, both in Salt Lake City and in other major cities around the country. I think a lot of people saw and liked that we were trying to address some gaps in the fixie/singlespeed market.

Gavin: What was the first year like running that business, and how did the idea come about to open up your own shop around the brand?

Juliet: The first year was pretty chaotic. We were selling bikes out of an garage on Capitol Hill and through a website that was not great. I think customers were always surprised by how meager our facilities were; it made some of them quite nervous, I believe. We always knew it wouldn’t work to stay in the garage for very long, so as soon as we had validated our idea, we began to look for a more permanent and professional home—that took a little over two years.

Gavin: What was the process like getting everything together and figuring out what you'd need to run it?

Christian: I love putting together estimates and plans, so for me that was a lot of fun. Building things on paper and working out as many details and processes as I can was a big part of my previous career. Of course, there are always lots of surprises no matter how much you prepare, and that keeps things interesting.

Gavin: How did you come across the location on State Street, and what made you go for it?

Christian: The location at 749 S. State Street was a huge stroke of luck. Juliet’s previous boss, Mai Nguyen, had recently purchased the place, and it was in considerable disrepair. We were able to get a good deal on it by promising to fix the place up. It is quite old, but really has a lot of charm. I believe it used to be a bank back in the day.

Gavin: What was your time like running it under the Loki banner, and what made you choose to change it into a proper bike shop for all types of bikes?

Juliet: We ran the shop under the Loki Cycles banner for about 2 ½ months before we figured out we would need to rebrand the shop to be its own thing. Loki Cycles is one line of bicycles, but in order to have a shop to meet the needs of the many, we knew we would need more products and more brands, and the tools and equipment needed to service and repair all varieties of bicycles. So Crank SLC was born to more fully service the community.

Gavin: How did you go about deciding what to keep in the shop to sell? Were there any particular preferences, or was it more aimed at products you knew people wanted?

Juliet: There is a lot of change happening very quickly these days in the world of cycling—as with most industries, I’m sure—and we wanted to build a shop to reflect where we think things are heading. High-end mountain bike and road bikes are great and a lot of fun, but those aren’t the vehicles to change the lifestyles and day-to-day routines for most people. We wanted to create a shop that focused on bikes for everyday life, adding a little bit more fun, and activity to some of the basic and often boring chores and errands we all have to do. 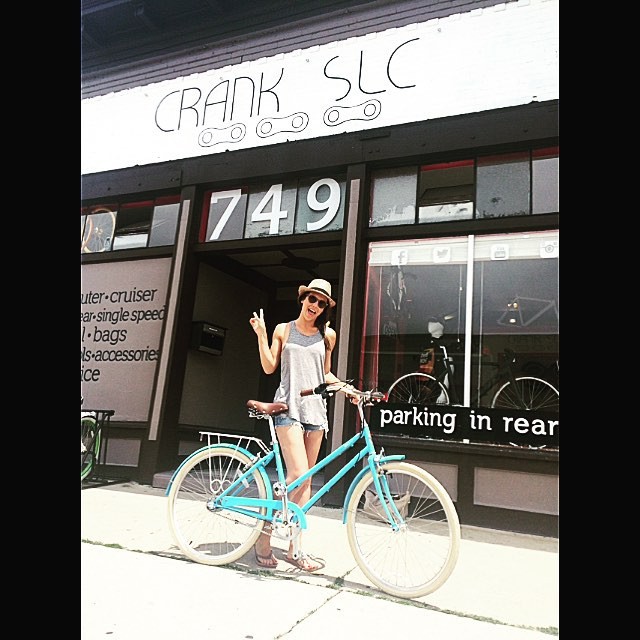 Gavin: Besides Loki, what specific brands of bikes do you carry in the shop?

Gavin: What was it like hiring the right people to be both handy and knowledgeable about what they work on?

Juliet: Hiring people is always a bit nerve-wracking. But we have definitely found some good ones. Salt Lake City is full of knowledgeable and hardworking people. I think our core philosophy as a company—“We don’t sell products we solve problems”—has taken a lot of the pressure off both our employees and our customers.

Gavin: What's your take on how the cycling community has grown in the past decade?

Christian: I can only speak for the past five years I have been in Salt Lake, but it really has been impressive and fun to watch the growth. It’s a perfect city to get around via bike. I anticipate the growth has only just begun.

Gavin: What do you think of the new bike lanes being added and the expansion of the Green Bike program?

Juliet: I personally think they are great. The city transportation board and the mayor are doing the right thing. I do hear and understand the complaints against them, but change is hard, and the right thing to do isn’t commonly thought of as a good idea until years down the line, when everyone can see the change that the visionaries had in mind from the beginning.

Gavin: What do you believe Utah still needs to do in order to become a better bike state?

Christian: I think Utah is really doing a lot of things right. And I know there are many good people working to make the state a better and safer place for cyclists. There are still a lot of roads that could use some re-tooling to make them safer for cyclists by adding bike lanes, lowering speed limits in business, residential and pedestrian areas and timing traffic lights to incentivize drivers to go the speed limit rather than speed up to beat the next red light.

Gavin: What can we expect from both of you and Crank SLC over the rest of 2015?

Juliet: We still have some good plans left for 2015: expanding our product lines and services, the 4th generation of Loki Cycles bikes, as well as some great events and races including the first of its kind, Salt Lake City City in the works. But above all, you can be guaranteed we are going to have lots of fun and stay active.