Web-video star shows how to be a Comic Con guest 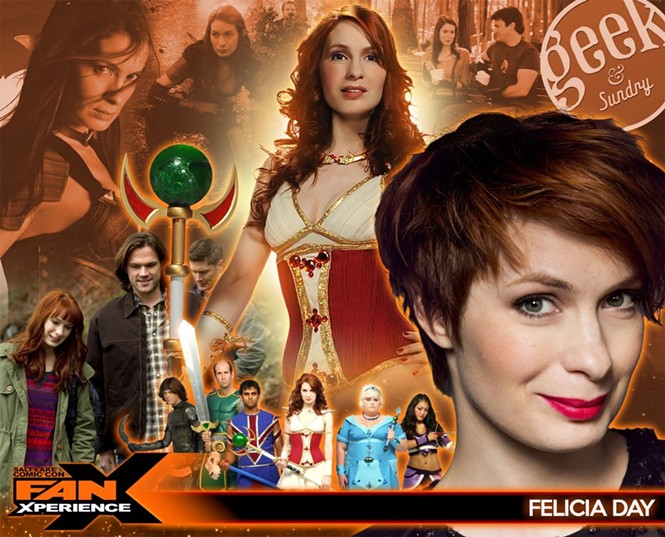 As I sat outside the Salt Palace's Grand Ballroom at the 2015 Salt Lake Comic Con — observing a packed line waiting to get into the next guest panel, and listening to a volunteer repeatedly shout over a bullhorn "The end of the line for Felicia Day is in Hall E!" — one thought kept going through my mind: Who is Felicia Day?

It's the nature of heterogenous popular culture that not all celebrities will be as celebrity-ish to all people, but I'm a professional who writes about popular culture, and her name rang exactly zero bells. Looking her up on the Internet Movie Database explained why. Supernatural? Never watched it. Dr. Horrible's Sing-Along Blog? Hadn't seen it. Various and sundry video game mo-cap performances and/or voices? Not my scene. I was hanging around outside that ballroom waiting for the line to form for Anthony Daniels' panel the following hour. Star Wars' C3P0? Now that was a celebrity.

But when the line finally subsided, and the volunteers noted that they didn't clear the hall after each panel, so I might as well just go in rather than stand out in the lobby, I did so. And I saw Felicia Day give a clinic on how to be a comic con guest.

Alone on the stage with no moderator, Day engaged directly with a huge line of attendees that had formed to ask her questions about her work and her life. Most of the specific references to her characters went over my head, but that was almost beside the point. She was present for every single question, smiling and commenting on guests' costumes or other details. When asked about an embarrassing moment filming a specific show, she got down on the ground to demonstrate accidentally winding up with a co-star in a headlock between her legs. She spoke the language of the crowd, talking about her own geeky loves. Even when she stopped to mention a book she had just published, it was in a context that felt personal rather than promotional. Day had been a guest at a previous Salt Lake Comic Con, and if any of the people in that room had seen her already, it was a lot more obvious why the line had spilled into an overflow room. On that stage, Felicia Day was simultaneously a star and the best friend of everyone in the hall.

As the room mostly cleared when Day's Q&A had ended, someone announced to the volunteers that Anthony Daniels would not be fielding questions. And that was the beginning of realizing his would be a very different program.

When the lights went down, the screens in the hall showed a crawl in the familiar style of Star Wars, with an amusing history of C3P0 and a collection of clips from the films. Daniels entered to a standing ovation, but soon coached the crowd into greeting him the way the Ewoks greeted C3P0: bowing to him as a god.

It was a funny bit, but felt pretty rehearsed. And for the next 45 minutes, that's the way the entire presentation felt. Like Day, he worked without a moderator, but wearing a wireless microphone and telling anecdotes about his life as C3P0 in a way that felt like a scripted one-man-show. The stories were interesting, and Daniels' stage presence was solid. He even brought guests on stage on two separate occasions to help with demonstrations.

What was missing was a sense that Daniels was fully engaging with the people who were there to see him. All evidence suggests he's a charming guy who treats people impeccably in one-on-one situations; there was nothing in his performance to suggest he was stand-offish or didn't genuinely appreciate the life that had been afforded him by Star Wars fans for nearly 40 years. Yet part of the appeal of panels like this at fan conventions is giving a large group of people a chance to feel closer to the stars they adore—not just closer in physical proximity, but emotionally closer. Felicia Day had done that for 4,000 people over the space of a single hour. Anthony Daniels had given them a chapter from his autobiography.

There's room, of course, for all different kinds of personalities in how they approach the convention experience. It's possible, as my colleague Bryan Young said later that day, that Daniels was simply wary of having to answer questions about a slightly controversial interview he'd recently given, or about fielding non-stop queries about the upcoming Star Wars films that he wasn't about to answer. It's still hard not to come away from those two panels feeling that Felicia Day had shown How It's Done. And if I didn't know who she was an hour earlier, I sure as hell wanted to know now.