Scott Gollaher is set to be sentenced on March 23 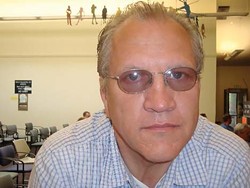 "Scotty" Gollaher, as he likes to call himself, is a man who values relationships. Depending on who you talk to he's either charming, worldly and larger-than-life, a rebaptized Mormon who's overcome his past mistakes and seeks to help the disadvantaged, or someone with an appetite for manipulating others that brings him either control over their financial assets or access to the young girls he is drawn to.

On Wednesday, Jan. 27 2016, Gollaher's charm failed him after he spent six days conducting his own defense in a trial that stretched over three weeks in Morgan County's Second District court before Judge Noel Hyde.

After two hours of deliberation, a jury returned a verdict of guilty at 9 p.m. on four counts of aggravated child sexual abuse against Gollaher, based on incidents that occurred in May 2012.

The 56 year-old developer and felon—he was convicted of child sex abuse in 1994 and served almost eight years, including for time relating to parole violations—built the Rail Event Center and at one time claimed high-ranking friends and business associates among well known names from the local legal, entertainment and corrections community.

Over several weeks, eight jurors heard from both past and recent victims about how Gollaher had molested them. The 2012 case revolved around a group of children invited by Gollaher to visit the sprawling, five floor mansion in Morgan County he and his wife were renovating.

Gollaher initially appeared in City Weekly in a February 2010 cover story titled Bad Vibrations, which looked at concerns among locals in North Salt Lake and music venue competitors regarding both noise issues at the Rail and his 1994 conviction for molesting an 11-year old-girl in Holladay.

In a story called No Apologies in April 2015, I reported on Gollaher's repeated run-ins with the criminal justice system relating to allegations of child abuse. At the time the story was published, he faced prosecution in Morgan County on molestation charges, and also in Salt Lake County, on a child sodomy charge and multiple sexual exploitation of a minor charges, involving the manufacture of child pornography.

The latter case is held up, to some degree, by a legal fight over whether Gollaher has the right to question his alleged child victim about images of him abusing her.

One child in the Morgan County courtroom in a halting voice, her eyes always fixed on the floor, described how he carried her with his hand between her legs, then pulled her against him while riding on an ATV together.

When he rubbed her back, he told her, she recalled, he liked to do that because he could feel her bra strap. At the end of a series of games, he told her not to tell her parents, "how much fun I had there but told me to ask to come back."

Gollaher then cross-examined her. The witness continued to stare at the floor, calling him "the defendant," even as Gollaher referred to himself as Scott.

The prosecution called the 1994 victim Sarah Call Heaton to the stand to testify about Gollaher's molestation of her when she was a child. Now a young woman, Heaton also had to answer Gollaher's questions on the stand.

City Weekly requested comment from the prosecutor Jann Farris, who could not be reached, and Gollaher, through his wife Sharon, who also did not respond.

Heaton, reached through her mother Liz, emailed that, "This is the closure that so many of his victims have needed.
Just knowing he will never be able to hurt another child or family, will let me get better nights rest. He deserves to suffer for the abuse and emotional torture he inflicts on all of his victims. Known and unknown."