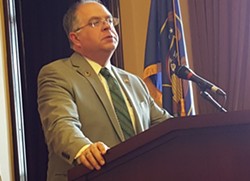 After protests that it could trample free speech rights, Rep. David Lifferth, R-Eagle Mountain, said Thursday that he is pulling back on his bill to criminalize doxxing. But there is now concern that without any language at all, doxxing is still legal within Utah.

"Doxxing" is an Internet term for when someone posts personal information about someone else online, typically including their home address, social security number, date of birth and other personal information with the intent of causing that person financial or even physical harm. Most recently, doxxing has been in the news in relation to the “Gamer Gate” controversy, as feminists who were publicly criticizing a perceived misogynistic bias within the online gaming world were hit by attacks that left some forced to move because they no longer felt safe in their homes.

Lifferth’s legislation drew sharp criticism from all corners of the Internet when it was released, even garnering an OpEd in The Washington Post, which claimed that the bill as written was so broad in its language that if someone were claim online that Rep. Lifferth “is foolish/evil/etc. would be a crime, so long as a jury concludes this was said with the 'intent to' (among other things) 'annoy,' 'offend' or 'abuse' Lifferth.” While doxxing is deplorable and should be a crime, critics argued, the legislation went too far and could potentially criminalize legitimate free speech such as an online petition, a protest of a business executive, or even something as small as writing a snarky tweet about an elected official.

“We may have run into a problem with vagueness [with the bill’s language] and perhaps overreach,” Lifferth said. “For that reason, I’m actually removing the doxxing component of HB 225. In addition, I’m also going to remove three existing words from the language. I’ll remove the words annoy, offend, and frighten—I think those are a bit beyond the limits and the scope of the First Amendment.”

While Lifferth does say he may try to address doxxing again in the future, one concern that could arise is that by stripping all of the doxxing language from the bill, rather than just pairing it down to address the free speech concerns, doxxing itself is still legal in Utah as long as the personal identifying information is obtained from a publicly available source. “I think there may still be some protections if you are trying to threaten or intimidate someone,” Lifferth says, “but posting personally identifying information by itself, is not a crime [now].”

While Lifferth is removing the anti-doxxing provisions of HB 225, the bill will move forward with its other provisions, including stiffening the criminal penalties for "swatting"— when someone falsely reports a violent altercation at the home of their intended victim, resulting in a police or S.W.A.T. team showing up at the victim's home.