by Jerre Wroble and Eric Ethington

In the final hours of the 2016 legislative session, lawmakers decided to pass $53 million in taxpayer funding for a coal-export terminal in Oakland, Calif., through which Utah can ship its coal and other products internationally.

As was reported in an earlier article, Senate Bill 246, sponsored by Senate Majority Whip Stuart Adams, R-Layton, authorizes lending out $51 million in sales-tax revenue to build a deep-water port in Oakland suitable for shipping Utah coal to Asia.

While their California lawmaking counterparts appear none too happy with the project, Utah lawmakers seemed to feel there was a divine calling in passing the funding for it.

"This project could be an opportunity in disguise," Rep. Derrin Owens told his colleagues. The Republican from Fountain Green said that perhaps in the future the coal-export port might lead to opportunities for the LDS Church to expand its reach in Asia.

Meanwhile, the East Bay Express' news blog Seven Days today published a post noting that key Utah lawmakers who support the project, as well as Gov. Herbert—also a cheerleader for the terminal—received campaign contributions from the coal company hoping to make bank if the project becomes a reality. 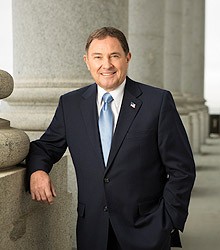 Disclosures.Utah.Gov and learned that Kentucky-based coal company Bowie Resource Partners (which operates coal mines in Utah and Colorado) donated $29,000 to the campaigns of both lawmakers and the governor.

Herbert himself received $14,000 from Bowie Resource Partners in the 2014-15 time frame. As was reported in City Weekly's previous article, the governor was outspoken about wanting to see "the free market work," in the case of funding the terminal, calling the $50 million price tag to taxpayers "an investment."

Rep. Joel Briscoe, D-Salt Lake City, who was one of only 17 in the House to vote against the bill, tried unsuccessfully to amend the bill to require an third-party study of the proposed port, to determine whether or not it really is a good investment. "If we were a business," he asked, "would we get an independent study before we spent $53 million? Of course, we would." Briscoe also questioned whether or not the bill really is supportive of the "free market," rhetorically asking his colleagues, "If this is such a good opportunity, such a great project, where's the private equity and why is the state paying for it?"

The final vote on the bill in the House was  52-17, and it now heads to the governor for his signature.

Stay tuned to City Weekly's Daily Feed and its upcoming legislative recap issue for updates on this bill and many others.