The Pipeline: Video Game To Vinyl

March 24, 2016
comment
Back in the day, when video-game developers were planning out their games, a lot of thought and care was given to the music scores that went behind every title. Because let's be honest: If a game has an annoying track behind it, it does wear on you after hearing it for the 5,000th time as you try to clear a stage. Over time, game soundtracks have become more complex and diverse, many employing complete 120-piece orchestras and choirs to record songs for every level. It's become such an intricate part of the industry that game soundtracks have become best-selling albums, and touring productions make millions a year playing your favorites from every decade.

One of the cooler trends picking up steam in the gaming community is having some of the best soundtracks remastered for physical purchase, whether it be CD or vinyl. The label Ship To Shore PhonoCo. has been working to fulfill those needs by releasing rare soundtracks of both video games and films that have rarely or never seen music store shelves. The company was formed in 2013 by Aaron Hamel and Justin A. Martell and Aaron Hamel, who became friends while working on the set of Troma Entertainment's Return to Nuke 'Em High Volumes 1 & 2, eventually becoming roommates.

Ship To Shore came about in a brief conversation, as Hamel recalls: “Justin, who is the world's foremost authority on the late, great Tiny Tim, approached me one day with the idea to put an at that point unreleased Tiny Tim song onto a replica Edison Cylinder. I thought it sounded like a cool idea, so we split the cost of making the project, and Ship to Shore Phono was born. After the success of the cylinder project, we decided to tackle the original Class of Nuke 'Em High, since we had connections with Troma, and everything just kind of snowballed from there.”

Over nearly three years, the label has released soundtracks to cult-favorite movies such as Manos: The Hands Of Fate, George A. Romero's Martin, and helped distribute the original score to the 1961 film The Mask. The decision of what to release is based primarily off of what Hamel and Martell feel like and get acquire the rights to. That may seem like a vague action plan, but, in essence, this is two friends and fans living out their dream on a much larger scale. But the big item that caught the eye of gamers last year was when the company released the soundtrack to Mother —the Japanese Nintendo prequel to the highly praised RPG, Earthbound—on vinyl. The project was funded through a Kickstarter campaign, and after two years of working out licensing and production, the album was released in the fall of 2015.

“Mother has long been a series near and dear to my heart, and I believe the music is some of the best VGM [video game music] ever produced, so it seemed like a logical starting point in my mind. I also have always felt that the Mother arranged album was a truly bizarre little curio and wanted to give it the release in the West that (I felt) it deserved,” says Hamel.

The two most recent releases to come out from Ship To Shore are Mother 2 and Axmio Verge. Mother 2, of course, is the Japanese name for Earthbound, released as a double-vinyl pressing in four different game-themed color schemes that pop like candy. The music was sent to the label by Sony Japan and was remastered by Welcome to 1979 Studios down in Nashville. It was then pressed at Rainbo Records in Canoga Park, with Hamel adding his own personal designs on the gatefold artwork for both releases, taken from the original artwork files sent to them from Japan.

As for the album itself, it may not have every single small track you've ever heard the game. I noticed one of Paula's tracks missing, though it does cover the primary music that fans associate with the series, and have come to recognize and fall in love with. This even includes the three PSI remixes added to side B of the second record, so shy of having every small 30-second clip during battles and short transitions, this is as complete of a soundtrack as you'll find for Earthbound that you can physically hold.

Axoim Verge, however, shows the company taking a step in a more modern gaming realm, as the game itself was only released one year ago. “I had heard about Axiom Verge before we signed up to the do the record, but I hadn't played it,” said Hamel. “It came to us from Jesse DeStasio, who was helping Tom with licensing deals at that time. After he told me that it was available, I sat down and played a bit of the game and listened to the entire soundtrack that was up on BandCamp. I was simply blown away by the thing and knew that we had to release it.” 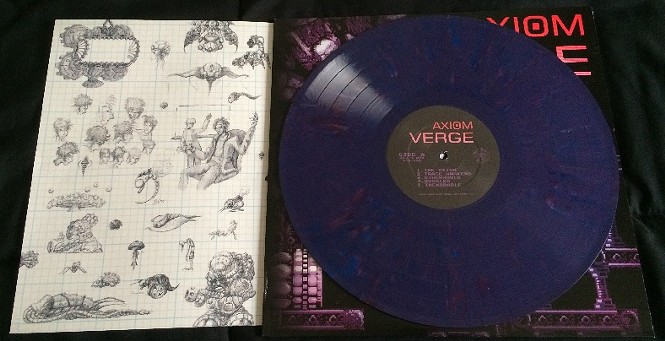 Axiom's  album only has a single record, in a striking dark purple mold that resembles the tone and color scheme of the game's matrix of levels. The great upside to this is that the electronic tracks composed by Tom Happ flourish through the speakers when put to vinyl; there's hardly a moment when you don't feel immersed the universe while listening. The downside is that, because of the album's size, some of the tracks were cut, so you're not getting the full experience as you would from purchasing it on Bandcamp. That being said, Tom Happ did have a hand in choosing what tracks were cut. I could think of no one else trusted enough to know what needed to be removed to make that album shine.

Ultimately, if you're a fan of either game, these are must-own albums. If you're a casual fan, take a listen first—or better yet, go back and play the games to remind yourself of the music before buying. But as with most Ship To Shore releases, these are in limited supply, so it's best to decide quickly before they're gone for good. As for the label itself, 2016 is looking like a big year for them as they appear to have a lot on their plate for 2016.

“This summer we'll be releasing Joe Renzetti's soundtracks to Basket Case 2 and Frankenhooker on a split LP, said Hamel. “Renzetti dug up his original tapes and then remastered and sequenced them himself for this release. We're also going to begin our dip into non-soundtrack releases, starting with Tiny Tim's America, a brand new album from the pioneer of camp rock himself, Tiny Tim. We'll also be reissuing the first album by The Holy Mackerel (Paul Williams' first band), and the two albums that the great MX-80 Sound did for The Residents' Ralph Records label (Out of the Tunnel and Crowd Control). We're working with legendary Japanese publisher Taito and putting out a few compilations of their arcade music, as well as working with Konami on the soundtracks to Snatcher and Lagrange Point.”