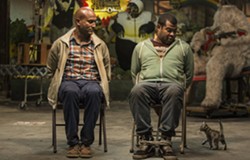 From kid stuff to stuff very not for kids to stuff that really shouldn't be for anybody, it's a varied weekend at local theaters before "Summer Movie Season" officially kicks off next week.

Garry Marshall continues his pseudo-franchise of holiday-themed ensemble comedies with Mother's Day, a wretchedly unfunny collection of clumsy storytelling and jaw-dropping bad judgment. The thin line between fine art and commerce gets a fascinating exploration in Andrew Rossi's documentary The First Monday in May, following preparations for the Metropolitan Museum of Art's annual fashion-themed exhibition.

Eric D. Snider finds the sketch comedy of Keegan-Michael Key and Jordan Peele (pictured) works to diminishing returns in Keanu—but that kitten sure is adorable.

MaryAnn Johanson finds the video game-turned-animated feature Ratchet & Clank thinks it's meta, but is nothing more than meh.