The Pipeline: Doom Rises From Hell Once Again | Buzz Blog

The Pipeline: Doom Rises From Hell Once Again

Being trapped on Mars with gory hellscapes and odd choices.

May 17, 2016
comment
I've been playing Doom since I was 12—before many of you reading this were born, before the first Console Wars were finished, before the internet changed shooters, before Quake came in and changed shooters, before Doom got bad. I remember a time when anyone with a PC had a copy of the iconic Doom II poster on their wall, the unnamed Marine  firing rounds at a demon from hell who had come to take over the Earth after we cleared them out of Mars. People were buying the soundtracks, which were demonized 32-bit versions of alternative and metal jams from the early '90s. There was a small period when Doom ruled the gaming world. Then came Doom 64, then Doom 3, then Doom RPG, and then a really bad movie starring Dwayne "The Rock" Johnson, then... you get the point.

The series reached a point of being a joke, even when iD Software announced they were working on a new sequel in 2007. Every time you heard about it at an event, it was going to be much greater than the last one, but nothing came.  ZeniMax Media, which owns Bethesda Studios, acquired iD Software in June 2009, including all their rights and projects they were working on. As they proceeded to create Doom 4, the game eventually got stuck in its own version of Developmental Hell, spending years with false starts and relaunches, eventually being retooled as simply DOOM in 2014.  After some pre-launches and beta testing, we finally got the game this past Friday, nine years since it was first announced and 11 years since the last proper Doom game. 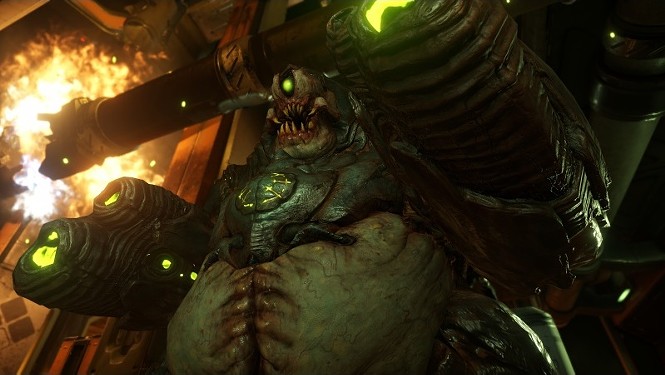 The plot is simple: You're back on Mars, you wake up being experimented on, you kill your foes, you snag some armor, find a gun, and then go kill shit. That's pretty much how every shooter should start. The plot is explained to you along the way as you hit each chapter, slowly being introduced to new enemies and finding out that both opening and closing the portal to hell isn't as simple as you believed. There are a lot of lacking aspects to this, as you have to comb through information as it's provided to you, and not all of it is useful to the plot. When you reach the end of the single player mission, something feels missing, even though you get a pretty good ending with a twist at the end.

Gameplay-wise, you're given a semi-different shooter, with elements borrowed from other titles. The button scheme is a mesh between Halo and Call of Duty titles,  which can get annoying after a minute as your brain tells you to hit a particular button, and then you're reminded very quickly that you're not playing that particular game, and you fuck up for a period of time as you're regaining your knowledge. Did the smash action really need to be pushing the right joystick? Then there's the exploration aspect, which at times feels like you're being given a trail of breadcrumbs to follow, going so far as deck-plating being lit up to indicate where you need to jump. And if you go level exploring to find secrets you missed, a big villain or a swarm of demons come to remind you that you really should go the other way. You're left occasionally feeling like you've been either led by a guiding hand or jerked away by force. The secrets are cool, including hidden levels, but are sometimes in the oddest locations, or require a lot of parkour skills to locate. I died more while looking for dolls than I did at the hands of demons. 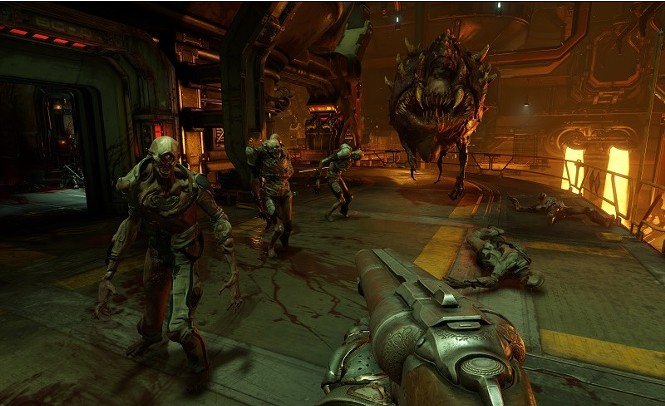 Like a lot of modern shooters, the story is lacking and quick to finish. But the multiplayer mode is what sells the game, which in Doom 3 was somewhat lackadaisical.  This version is cleaned up and reminds me a lot of PlanetSide, Wolfenstein and Rainbow Six, maybe a Halo throwback here and there. Matches are a scramble to run fast and kill quickly, single player is a daunting challenge to stay atop while team games often lead to brutal carnage across the level, just as you would hope. The only hiccup to the entire setup is that occasionally players glitch out, or the server hits a snag. I killed a guy who was frozen still mid-match, and then shortly after we had to wait 60 seconds for the level to kick back in. Not every server is perfect, but a minute-long wait to get back to shooting can throw you off your game in a hurry.

The only aspect left is the SnapMap, which works about how you might expect it would with any other shooter: Build a level, make it a pain to navigate, invite your friends and wreak havoc on their minds. But after a minute, that gets old, and unless you're willing to dive in for 20+ hours to design the ultimate map with multiple levels, it kinda falls short in the creativity department.

Overall thoughts: DOOM is exactly what you would expect it to be, and for the longtime fans it will be a welcome improvement and addition; this is the Doom they've wanted since 2007.  But for experienced shooters and gamers who have been around the block more than a dozen times, this will only be appealing in the idea that they can say they played a Doom title on a modern console, all to the sounds of industrial rock that sound like something Trent Reznor threw together on a weekend. Don't get me wrong: As a fan of the series, I'm happy. I got a Doom game that gave me what I wanted, and it's a pretty good game overall.  But it's lacking in key areas and frustrating in others, and nostalgia can't cover those small pieces up. Totally worth your money if you're a Doom fan, but move through the red planet with caution. You may not get everything you hoped for.