The Pipeline: Choosing Fates In Batman: The Telltale Series

If I'm going to be playing Batman's life, I prefer it to be multiple choice.

August 03, 2016
comment
been a crazy couple of weeks being a Batman fan, when you put everything together. First came the criticism over the adaptation of The Killing Joke including an extra 30 minutes of content that does absolutely nothing for Batgirl, let alone powerful women in comics. Then all the hype over Suicide Squad being crushed into a tiny cube after critics got a look at it. But in the middle of all that mess was something very special—and it's a shame that both of those events have turned the release of Telltale Games' latest title, Batman: The Telltale Series, into an afterthought. The game hit every console and mobile device (except for the WiiU and PSP) on Aug. 2. 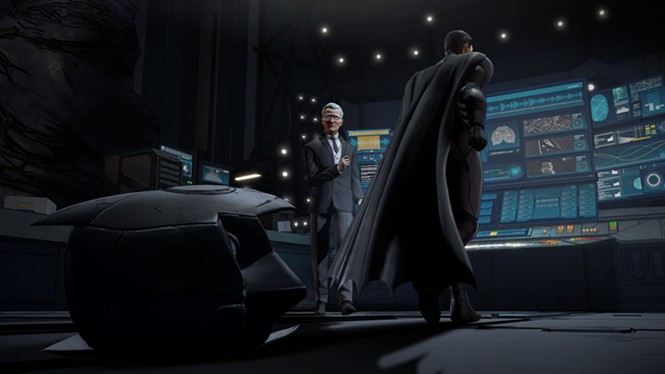 Telltale has already done amazing work with The Walking Dead, Borderlands and Game Of Thrones; my personal favorite isThe Wolf Among Us, utilizing the universe of Vertigo Comics' Fables. So to see them take on a DC character was pretty damn awesome when the game was first announced.  You start as Batman during a pivotal time for the Caped Crusader, somewhere after his first year of being Gotham's vigilante. His gallery hasn't been defined yet, Harvey Dent is still the D.A. with his whole face intact, Jim Gordon is still a lieutenant on the force, Alfred still has his hair and your primary battles are with the mobs that currently run nearly every aspect of Gotham life. While taking out some thugs at the mayor's office, you run into Catwoman for the first time as an enemy while recovering items that she stole.

For hardcore Batman fans, you'll notice that this is a slightly altered timeline with certain events of Year One, The Long Halloween and Monster Men meshed together, without any of the major plot points those comics may have. You see the people of Gotham develop into their own skin through the interactions and choices you make, like meeting up with a younger Oswald Cobblepot before he starts his spiral into becoming The Penguin. For those of you hoping for a laundry list of cameos in the first chapter, the most you're going to see is reporter Vicky Vale and Renee Montoya. This story primarily focuses on Batman and the mob, which is where it should start, because that's what Batman started out to do: clean up Gotham. a fascinating take on the character that many writers over the years have shied away from in favor of playing with one or more of his bitter enemies. But what greater challenge is there than saving the city from itself? And fret not, because those enemies will be coming in later chapters.

The gameplay is wickedly fun in the action sequences. As you hit a battle, you'll quickly be shown an arrow direction or button to press in order to connect a blow. The game is slightly forgiving when it comes to messing up, but do it too much and you'll actually get Batman killed. You'll need precision on some hits and quickness on others to get the job done. But that's the easy part; the hard part is talking with people. Like all Telltale titles, during periods of talking you'll be given four options of responses, which includes three different emotional choices and staying silent. The conversations in the game appear easy to navigate, as you know what side of the law Bruce stands on, but your words and actions will get distorted very quickly as the media and friends assume Bruce Wayne is up to no good, while Batman can't seem to catch a decent break. At one point, you interrogate a subject that ultimately leads to violence, but the game hardly gives you a choice in the matter, making you come off as a psycho in a cape who left someone injured. Making choices is critical to how the game progresses and how future chapters will play out, so it's best to go back and read a few comics to remind yourself how to act as a millionaire and as a crime fighter.

The graphics, interactive and music are all amazing. Gotham doesn't look like a war zone yet, but it certainly has seen better days as you make your way to rundown parks and shifty warehouses. The bulk of the design was inspired by artists Jim Lee, Greg Capullo and Neal Adams, with Telltale adding their own stylistic coat to it. Utilizing the Batcave is great, as you get to see your full armaments and suit, plus a Batmobile that looks as if you could drive it on a normal street. The weaponry at your disposal is all automatic when it comes to the story, but you do get to have some fun with the drone in planning your attack. It's all set to an orchestral soundtrack that brings you back to the days of The Animated Series, reminding you of the tragic and brooding man behind the bat as he fights to save his city. It isn't a replica of any other soundtrack that fans may be familiar with in film, television or gaming—it stands alone, much like the game does, and rightfully so. 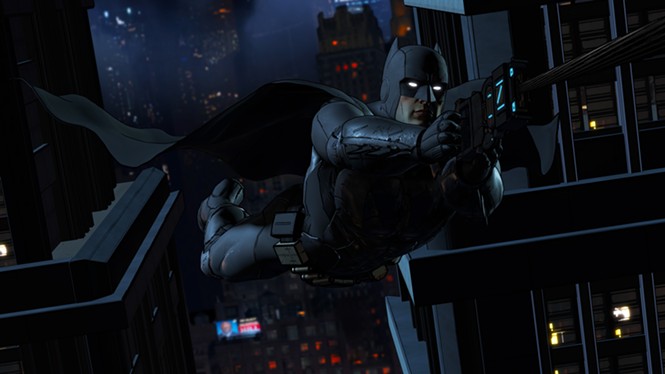 This is a must-play for any Batman fan, and it doesn't matter what your favorite incarnation is.  Even if you're just into good storytelling, this is one to sink your teeth into for the season pass and enjoy as new chapters continue to come. You're probably going to be seeing Batman: The Telltale Series pop up on a lot of Twitch streams soon, as the game will be including a Crowd Play option, giving live viewers a chance to vote on the decisions Batman makes while the primary player deals with the consequences, meaning it will be very rare for any two stories to ever play the same. The game is a quality experience no matter what system you buy it for. The only downside to any of it is when you reach the end of Chapter One and realize you need to wait for Chapter Two to come. But of course, that just gives you chances to go back and play it again if you don't like where you're headed.

No matter what you choose, remember: You are justice. You are the night. You are Batman!