Gallivan Plaza has been home to a ton of events since they remodeled a few years ago. Sure, they lost the Twilight Concert Series as it grew to dominate Pioneer Park, but they ended up with plenty of outdoor concerts and festivals. Every year the place seems to incorporate a new event, or take on a growing festival, and that trend continues as the Urban Arts Festival moves from The Gateway and takes over the park and avenue on Sept. 17-18. Today we catch up with our old friend Derek Dyer to talk about the growth of the festival and their latest move, as well as what you can expect to see this year. (All pictures provided courtesy of the Utah Arts Alliance.)

Hey, Derek! How have things been going since we last spoke?

Derek: Things are good. On top of the Urban Arts Festival and all the regular Utah Arts Alliance stuff, I have a couple big projects we are working on. These include trying to save the Granite High School building in order to create a community center and a creative industries hub, as well as a project to start a new art-centric FM radio station. So things are busy right now.

How have things been going for the Utah Arts Alliance lately?

Things have been going very well. We currently have four facilities; the Urban Arts Gallery at The Gateway, the Art Garden, Counterpoint Studios (which is our recording studio) and The SLC Arts Hub. On top of the expansion of facilities, our many programs—and events like the Urban Arts Festival, The SLC White Party, the Connect Programs—have all been growing very rapidly over the last few years.

What’s been happening with the SLC Arts Hub these days?

We are coming up on our fifth anniversary of opening the SLC Arts Hub, and has never been busier or more vibrant than it is right now. With 35 artist studios, plus dance studios, event space and workshop areas, it is always buzzing with creative energy, from our artists, dancers, actors and makers. The Arts Hub is truly a one of kind space that is simply amazing when you consider the artists and groups that call it home, including Samba Fogo, The Fed, Salt Lake Capoeira and Element 11, to name a few. Make Salt Lake is one of our new residents at the Hub, and that has been a lot of fun. 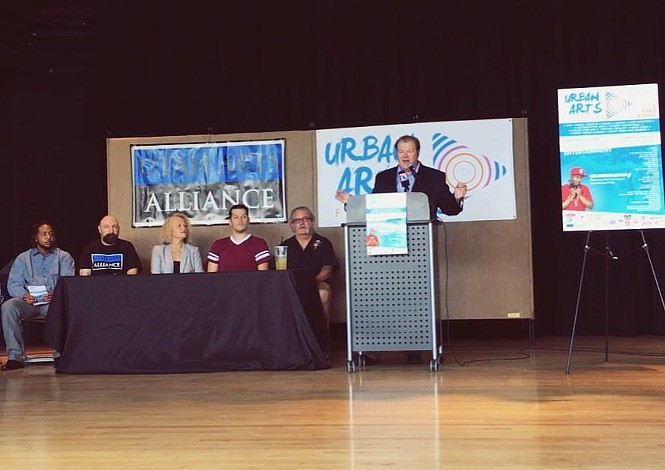 How has it been for you running the Urban Arts Festival for the past five years?

It has been one of the hardest and most rewarding things I have done in my life so far. When we started the festival, I think we had some idea that the festival would be successful and grow, but I don’t think we thought it would get so big so quickly. It is now the largest free art event in the state; last year we had more than 40,000 people visit the event. This year we received a prestigious Our Town grant from the National Endowment for the Arts. It is only the fourth such grant ever to be awarded to a project in Utah, so we are very proud of that. Because of the success we are seeing with the festival, we are growing a lot this year, including moving the festival to the Gallivan Center, adding a second day and doubling the amount of artists that will be showing to 200!

What kind of challenge has it been keeping pace and growing with so many other festivals over the summer?

I love that Salt Lake has so many great events. We try and participate in as many as we can. We are a big part of EVE Winterfest, of course, with my giant disco ball and other art projects. Last year, we built the Urban Sculpture for the Utah Arts Festival, which was a 15’ tall wooden crystal. This year we teamed with the Twilight Concert Series by helping program a local act and setting up our graffiti walls at two of the shows. We have also contributed large-scale art installations to Salt Lake Comic Con, among other events. We don’t look at the other big events as competition, but rather, we look to contribute to them if we can. We feel like you can’t have too much art, or too many great art events in the city. I think our attitude toward collaboration and support of other events has only helped our event grow.

What’s the reaction been from patrons and participants over the years?

The reaction has been very positive. We have many artists that have been with us since the beginning and still tell us it is one event that they plan on doing every year. Our patrons that have come to the event year after year comment on how much fun it is, and how different it feels from other events. Both patrons and participates have grown throughout the years and it has been wonderful to get to know more people as we continue to evolve

How did the decision come about to move to Gallivan Plaza? Were there any issues with how things were going at The Gateway?

At the end of last year’s festival, we had to acknowledge that the festival was going through an evolution. We had grown enough that we needed to think about what was next and what that would look like. We needed to add more days to the event and we needed to add more days to set up and tear down the festival. We are also very excited about what is happening to the block with the new Eccles theater and the Regent Street renovation. Originally the festival was going to coincide with the Eccles Theater/Regent Street grand opening. Unfortunately, because of construction delays, we couldn’t make that work, but we are still happy to be a part of it all.

We love The Gateway. Our Urban Arts Gallery is located there, and we wouldn’t even consider moving it at this time. The gallery does very well in terms of both sales and visitors. Last year we had more than 30,000 come through our doors, which I think says two things: First, we have a great gallery that people are drawn to, and second, The Gateway has amazing foot traffic (yes, really). So moving the festival had nothing to do with any issues with the Gateway as all of our events there were great experiences. In fact, we are working on a new festival we are hoping to launch next year, which will be at the Gateway.

What does afford you that you couldn’t do before?

The Gallivan has great amenities—it is built for events so it is easier to accommodate some of those activities. Really for us, we are more excited to have a new canvas to create on. This first year has been fun to plan with all the new space and all the nooks and crannies. One of the things that the new space has led to is the addition of the Custom Culture Automotive Arts Area.

Speaking of which, what made you decide to add the Custom Car Culture Area to the fest?

We have wanted to add this type of element for years. We decided with the new venue that Gallivan Avenue would be a great place to showcase some of the best-customized cars and motorcycles around. For years, the festival has included “Art Cars,” which are also called mutant vehicles in the Burning Man community. We wanted to expand that to exhibit these automobiles that have been customized to the extent that they could easily be called "Art."

You’ve also added street b-ball and a dunking contest to the mix. What made you choose to include those sports as part of the mix?

Earlier this year, I met Lance Lavizzo, who runs Hard-N-Paint Basketball League. We hit it off right away, and I thought to have a street ball tournament at the festival would be a lot of fun. I played basketball a lot when I was younger, and I believe that there is an art to the game. I also loved the idea adding sports to the festival because that element might draw people to the festival that might not normally go to an art festival and maybe someone that normally wouldn’t go to a basketball game might enjoy it at the festival and maybe both people come away with appreciating something they didn’t before. I like the idea of the action and energy that it could contribute to the event.

Along with that, the art additions include Digital Graffiti and a VR art space. What will both of those areas entail?

Our Digital Graffiti area showcases new frontiers of art, exhibiting interactive video and projection art. We have two artist,s in Rebecca Gillette and Ami Hanna, that are producing two separate exhibits. One exhibit allows the participants to interact with it by dancing in front of a screen that will recreate their movements and project them in amazing and magical ways. The second project allows participants to become projection artists, creating his or her own projection mapping and simple animations on a tablet that is then projected onto the screen. The Virtual Reality component will have a selected group of artists that traditionally work in 2D images like painting or drawing and giving them a basic training on how to use VR art tools like Tilt Brush and allowing them to create virtual artworks while the audience watches what the artist sees projected live on the screen. We are really interested in educating artists and the public on new media art forms such as projection art, virtual reality art creation, and other cool mediums like light art. People can also explore the VR software in between the artists' live painting sessions.

What else can people expect to see this year that we haven’t talked about?

Our music and performing arts lineup is simply unreal—it is also very diverse. Of course, we have amazing hip-hop acts and breakdancing battles, but we also have some great rock acts, a beatboxing cellist, reggae from renowned artist JRAS and even some African drumming and dance and musical theater. Saturday night we will be featuring hip-hop pioneer Grandmaster Flash who will be playing a two-hour set! So I suggest everyone wear their dancing shoes, because Salt Lake City is going to find out what The Get Down is, up close and personal.

What can we expect from you and the Alliance over the rest of the year?

This month we have our sixth annual Skate Deck Art Show up at the Urban Arts Gallery featuring works from over 80 artists all done on or with skateboards. This is a show that should not be missed. In October, we have the Monsters & Robots show just in time for Halloween; this will be a fun show for people that like pop culture art. In November, we have what will probably be the solo show of the year, with Jimmi Toro, who will be showing original paintings accompanied by his own songs and musical arraignments and music videos that he has also created. Last time Jimmi showed at the gallery, he won the City Weekly award for Best Painting Exhibit, and this show will be three times that. On Dec. 9, we have our Connect Gala, which is our big end of year event where we award the winners of Connect over $4,000 in cash awards, there is a silent auction and it’s a lot of fun. Then from December 28-30 is EVE Winterfest where you can see my giant disco ball, the largest in the U.S.! Finally, January 14 is the 16th annual SLC White Party, which is our second biggest event of the year and is one amazing spectacle that people look forward to all year long. So you can expect a lot from us.