No Registration? No Problem | Buzz Blog

No Registration? No Problem 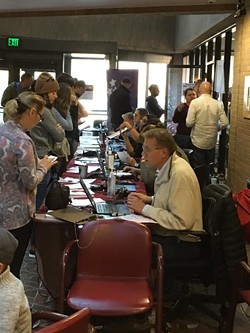 Having signed up to vote at a Twilight Concert booth, Todd Keith was set to cast his ballot and express his civic duty—except that he wasn’t. When the first-time voter showed up on election day, he was told that he wasn’t in the system. Keith’s form seemingly vanished into the ether.

“They just had a booth set up,” he says of the registration station. “It was a volunteer organization doing voter registration. They had a tablet and we filled out all our stuff.”


Fortunately for Keith, it wasn’t too late.


Salt Lake County is one of eight in the state that allows residents to register to vote on election day. This is the final year in a three-year pilot program, which covered a mid-term election in 2014, mayoral races in 2015 and the general election in 2016.


Though a tad annoyed that he had to wait in a registration line then hop into a voting one, Keith was relieved his vote would be counted.


A few summers ago, his office tried to register residents at a Twilight Concert, but the effort was abysmally unsuccessful. “We were there all night, and we had maybe seven registrations,” he says.


“It does happen, but that’s one of the reasons why we’ve encouraged the Legislature to do the pilot for same-day registration,” he says. “It’s that last failsafe where somewhere along the line the system failed.”


Voter Dave Doman says he meant to sign up earlier but never got around to it. The night before the election, he poked around on the internet and learned that he could register and vote at the same time. He made it to the Salt Lake County building midmorning.


For the first time in decades, Utah voters were told that they could sway the presidential race, which factored into the decision for some residents who typically sit out elections because the electoral college is a foregone conclusion. Republican presidential candidate Donald Trump, however, polled poorly in Utah compared with GOP candidates from years past.


“This election just opened my eyes because it is so different,” Doman says. “And also, the word is Utah could go either way.”