We get a chance to preview the newest title from PaperSeven.

November 24, 2016
comment
There's something to be said for story-adventure games. A lot of them are quite good when you get invested in what you're viewing, and they no longer just become a story that you interact with, but a quest you need to see resolved. All too often, however, we're given stories with little to carry us forward beyond the need to stay alive, as we've seen with survival story games that are far than fiction. So it was a nice change of pace to receive a beta for PaperSeven's latest title, Blackwood Crossing.

The game puts you in the role of Scarlet, the older sister of a young boy named Finn who is playful, creative and seems to get into trouble. From the start, you can tell things aren't exactly what they seem, as you start running into characters with papier mâché masks who represent figures in their lives, including your own parents, who have passed on at some earlier point. You'll start having magical interactions with many of the figures on a train ride that you're taking with Finn, including watching the train itself turn into a variety of atmospheres that you'll have to navigate. Ultimately, there's some kind of sadness within both characters that you'll be exploring as the game tells you the story of their lives. 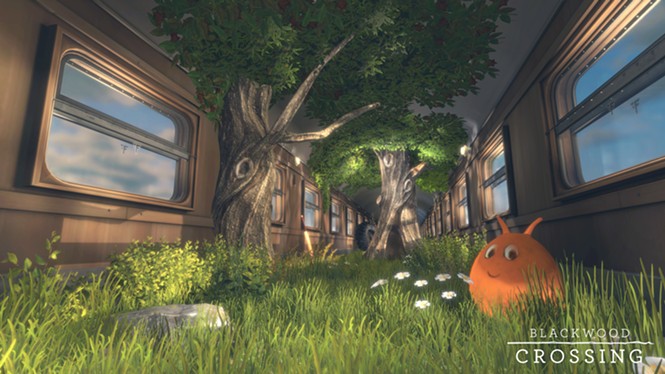 One of the best elements to Blackwood Crossing was that of the acting. While it's hard to get genuine emotion out of some games, especially when it's an indie developer and the graphics often don't sync up, this one pulls it off nicely. You get a genuine feel for Scarlet and how she's essentially been helping raise Finn with the help of their grandparents, while also trying to live out her own life with a boyfriend. Finn's personality develops throughout the story, showing the wonder of a kid exploring his own talent while still being completely frustrated with parts they're no good at. The game nails the sibling discord to a tee, with the older/younger pairing and how the older must often deal with the younger learning lessons they've already managed to master.

The gameplay itself can be a little clunky at times, which is expected for a beta. On occasion, it feels like the game is trying to catch up with the decisions I make, like picking up objects or walking into an area that's shaping itself. I found this happening a lot when the train would change into a forest or a garden, or when I would walk around an area filled with tons of objects that had to be created as I moved. The puzzles are pretty cool, and can be challenging if you're not immediately keen to solve them, which makes it a great game for kids to play while giving adults a little something to make themselves feel smarter.

Ultimately, we're going to be waiting for a little while for the full release of Blackwood because even though the developers have put a target date of late 2016 on the game, we've got six weeks left in the year and no hard date attached to it. Keep an eye out for the game when it makes it's way to Steam, PS4 and Xbox One, hopefully in the near future.