A look into the solo pop-up gallery near the Eccles Theater.

Salt Lake Gallery Stroll's last event for the year took place this past Friday night. Every December, the last Stroll is held at the start of the year rather than trying to invade the holidays, because if anyone is going to win the "war" on Christmas, it's Christmas. For this month, I went a little abstract and skipped going to the usual galleries filled with group showcases and massive art sales, and instead went for a pop-up gallery on Main Street (149 So. Main to be exact) featuring Sarina Villareal, just a few doors shy of University and the new Eccles Theater.  The gallery is only on display until December 21, so with less than three weeks left, I chatted with Villareal about the gallery and her artwork, along with pictures for you to check out.

Gavin: Hey Sarina! First thing, tell us a little bit about yourself.

Sarina: I am a Houston native, I've been in SLC for eight years now. I have an incredible and supportive family (my 7-year-old daughter even helps me in the studio sometimes). By day I am the marketing director and designer for UMOCA. By night I am a family lady, video and artist.

What first got you interested in art, and what were some of your early inspirations?

I can’t exactly put my finger on what made me interested in art. Drawing and painting were just something I’ve always and was lucky enough to have parents that would encourage that. Early inspirations include being able to draw a horse! Really, though, I would get in trouble in elementary school for drawing in the margins of history tests. But damn it, I taught myself to draw a horse! I also gravitated toward figures early on. I landed in the principal’s office more than once for drawing nudes, but it was what all the modern artists did. It was a rite of passage and I needed to learn that, too. It’s funny though that I was, oh, 9. Later, in high school, I took art electives whenever I could. I’ll always remember my instructors Susan Sheets and Karen Faren-Barr; they were who drove it in that I was talented and had something more than the other kids. They took an active interest in me—I still communicate with Susan on occasion.

What specifically drew you toward painting as your favorite genre?

Mostly, it was what I was exposed to. The artists I learned about were, by and large, painters. It was a classic medium that was easy to get a hold of and experiment with. I grew into it, it’s always been a part of me, and what I’ll focus on. While it’s traditional, there are still many ways to redefine the genre. Does it have to be on canvas or a 2D surface? What can be substituted for paint? Lately, though, I have been toiling with 3D and installation ideas. I have created two small scale 3D/timepieces that incorporate flowers and their eventual decay. Currently, I am working on an installation piece for a vacant window at the Gateway Mall.

You earned your BFA from the University Of Houston. What made you decide to go there and how was their program?

When leaving high school, I applied (and was accepted) to art schools thanks to the encouragement of my high school art teachers, but ultimately I went to UofH because it was close to home and affordable. I am one of the few in my family line to go to college. I was absolutely encouraged to get a higher education, but my parents didn’t know what that was like, was afraid of me leaving the nest, and that made me fearful, too. Even with scholarships, it left so much schooling unpaid, I had no idea how to manage that. Student loans, though they seem obvious to most, was not a concept I was aware of then. I earned an A.S. in graphic design and worked for two or three years before returning for the BFA at the U. I am generally pleased with the UofH program. It was very much a studio environment where students would explore their style of art making. At the time it was incredible to do whatever I wanted for six hours each day… heaven! But looking back, I would have benefited from more instruction on contemporary ideas and techniques, and even a marketing or business class.

What influenced you to start creating more abstract paintings?

I was starting to feel like my brush work was too controlled, I would easily get hung up for hours on a portion of the figure, so I decided to explore. It began with two or three canvases of nonrepresentational mess; I knew it would suck at first, so I wasn’t too hard on myself. I found that I really enjoyed the process, and began to blend a controlled style with my learned abstract techniques.

What eventually brought you to Utah, and how has your time been here?

My sister-in-law moved here many years ago, and my husband and I visited every year, then twice a year. He had been hinting at moving, and it took a long time for me to warm up to the idea, but one especially beautiful evening in Parley’s Canyon he said: “Just look at this.” That night I was sold on Salt Lake City. SLC has been amazing, I love the outdoors and the smaller city vibe. It was so much easier to make something of myself here than it would have ever been in Houston. It’s just too massive and uppity about fine art.

How was it for you getting involved with our local art scene?

I went about it from a different angle than I would assume most artists do. I didn't come to SLC as a professional practicing artist, I didn't get a studio space, I didn't join collectives. I started by working as a designer, and gallerist at J GO Gallery in Park City. I met great and talented artists there, learned the business, and got an inside perspective of what a gallery owner looks for. That helped build my confidence in approaching galleries to represent me. Currently, I have a number of pieces at 15th Street Gallery. Lucy, the director there, found my work online and invited me in. I feel so lucky! It's such a beautiful space. After J GO, I became the marketing director for the Utah Museum of Contemporary Art. Same situation, I am learning an inside perspective on a museum, I am around super-thoughtful curators, and educators—and best of all, I am surrounded by new, exciting and cutting-edge art every day.

What's your process like creating a new painting, from idea to final product?

I don't spend a lot of time planning—but I doodle a lot. When I draw a composition that seems interesting, I explore it more on canvas. When it comes to the subject, I choose something that would complement the basic structure I started with.

Do you find yourself playing around with your designs a lot, or do you try to stick with a thought when you have it?

I work in a very fluid way—though I have a doodle or a general idea, it can change once it's on canvas. That's what I like so much about abstract work. When I worked strictly with figures, I was very regimented.

What made you decide to do a pop-up gallery this month rather than take over a gallery?

I don't even know how to begin with a takeover, or who to talk to—I guess opening a fresh space seemed easier, and I can be entirely in control, and responsible. Turns out, it's totally not easy, but very rewarding.

How did you come across on Main Street and how was it turning it into what you needed?

I came into as an invitation for a one-night show back in May for the May Day on Main Floral Walk. The owner allowed me to stay a bit longer, then a bit longer, then we started on a month-to-month contract, and now a three-month chunk. That's when I jumped on making it official and ephemeral. Once it's time as a gallery comes to an end, I think I'll use it as a super awesome studio space.

Tell us about the art you currently have on display.

Right now it's a compilation of older work and my newer style. It's such a great opportunity to show the older work that has cycled through 15th Street Gallery, and things that haven't left the studio.

What's the reaction been like so far from when you opened? What do you hope people will take away from this exhibition?

People have been excited for me! Most are surprised that the person standing in the gallery is the artist. It makes conversations about art a lot more engaging and helps me understand what people see in my work.
I hope visitors connect in some way with the memory degradation concept and share their stories with me. 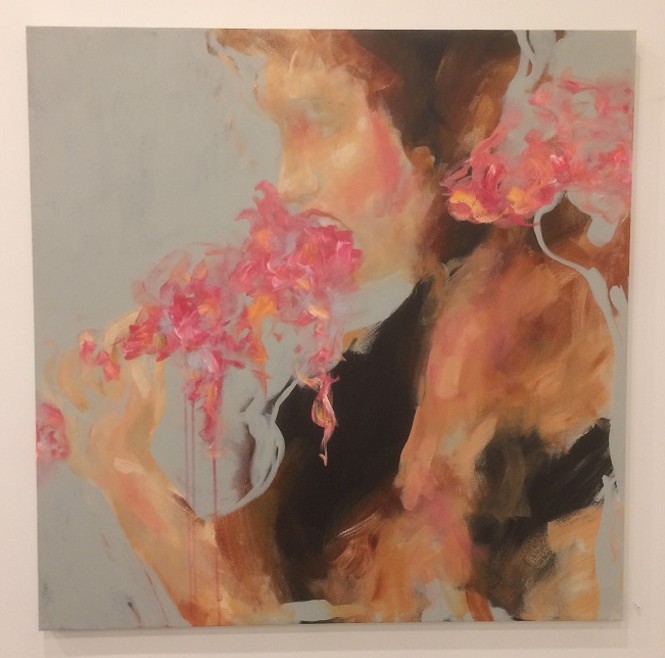 What can we expect to see from you going into 2017?

I'm not sure. I want to try more installation, and I want to explore my new “obstructed” look thinking about memory blocks. I've also been increasingly involved conversations about what it means, and how to open pop-ups. I just may give it another go in 2017.