A look into the new brand of bitters found at The Rest.

Over the past two years, we've seen a surge in small businesses that focus primarily on bitters. It's not to the degree of where you'll find all locally made products in every single bar and mixology shop in town, but enough to where people are catching on to the craze and starting to enjoy and experiment with them as they head out for drinks. One of the latest is Honest John Bitters Co., created by Brandon Cagle and Sara Lund of Bodega and The Rest (331 S. Main) in downtown SLC. Today we chat with Lund about the company and the flavors they offer before they hold some upcoming events for you to try them out. (All pictures provided courtesy of Honest John.) 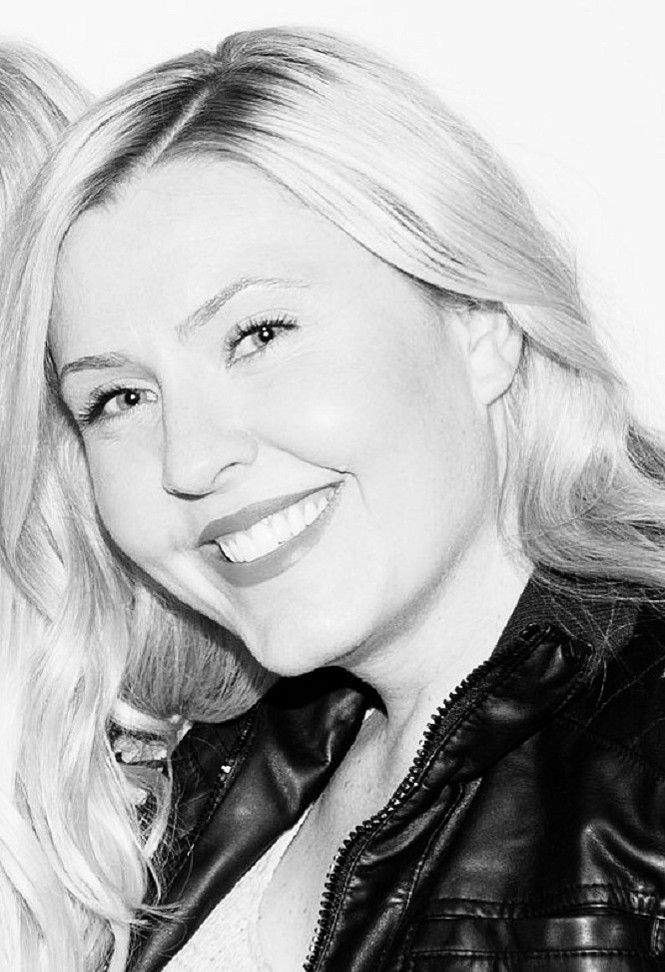 Hey Sara, first off, tell us a bit about yourself.

I have spent the last 10+ years of my life in between NYC and SLC, and after opening Bodega and The Rest, I decided to make SLC my primary residence, and NYC my “getaway.” I love the balance of both, although I wish I had much more time to spend in New York. I always describe the concept as a “creative project 10 years in the making,” and it manifested itself in the form of a cocktail bar and restaurant. I’m probably deemed what most would call a “workaholic,” and spend the majority of my time working on or in my businesses. When I’m not working, I enjoy my privacy and time spent with my other half and my dog or scheming about “what’s next.”

How have things been going running Bodega and The Rest?

Bodega and The Rest continue to be a success. We work really hard to maintain the integrity of the concept and to continue to improve the experience and our product. I have an unbelievably loyal team that works tirelessly and takes great pride in their jobs, and even with the launch of a new business, we just had our most profitable year ever.

When did you first take an interest in bitters beyond just the bar?

I’ve always taken an interest in cocktails and bitters, and what makes one product superior to the next. The idea of starting my own line of bitters came a couple of years ago, but knowing my own individual workload, I knew I needed a partner in the venture. I had asked several people/employees who have come and gone from The Rest if they had any interest in starting a new company, but no one was willing to give the time and/or commitment it would take to do it, and do it right. It wasn’t until Brandon Cagle, my executive chef, came back to work for me after a six-month hiatus, that I found someone who was willing to do the work with recipe development and production.

How did the idea come about to start up a bitters business?

When Brandon and I started working on this project at the beginning of 2016, we initially thought we would just produce very small batches to use exclusively in The Rest’s cocktail menu. After tasting the first couple of batches, and also acknowledging the amount of money we were spending each month buying other companies' bitters, we decided to take that money we would otherwise spend on other product, and invest that into the inventory we would need to produce larger batches, start developing a brand and logo design, and get the necessary licensing to bottle and sell the product both in The Rest, and to specialty shops.

Where did you end up getting the name Honest John from?

I can’t take credit for the name. This was all Brandon. We had both brainstormed and had our own ideas, but Honest John Bitters Co. was one of his that we both loved. The name and logo design plays off of the history of bitters and its journey from being a “medicinal digestif” to a “cure-all elixir,” and the interaction and sales pitch between the duplicitous “snake oil salesman” and the gullible “honest john,” who is far too trusting and believes the product will cure all of his ailments, not just help aid in his digestion. The hand with the crossed fingers that substitutes the “o” in Honest, represents the salesman “telling the truth.” 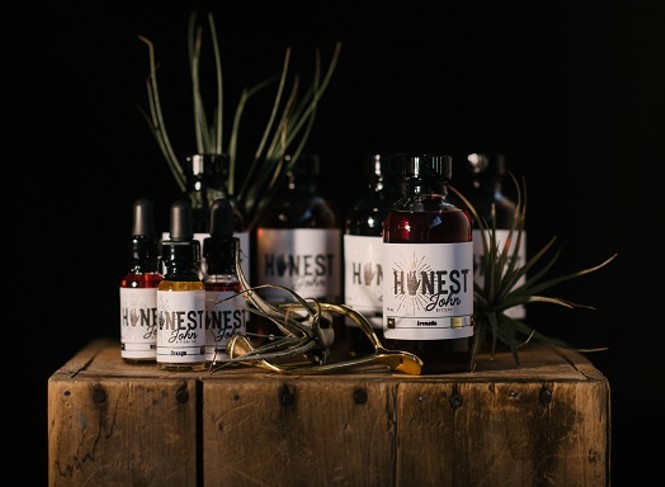 What was the process like in finding the materials and tastes you wanted for the line?

The process has been long, and we continue to try and source quality ingredients and keep costs under control. We’ve already learned some hard lessons, and wasted time and money on some dead end roads (mostly with sourcing the high proof alcohol you need for extraction, in this lovely state of Utah and all of the liquor laws), but I think we are really close to having everything buttoned up and having some good allies to help ramp-up production and continue to make the product more and more profitable.

How much experimenting did you do with the flavoring? Did you aim to make versions that weren't like other local companies or more like variations on common flavors?

We have done a lot of experimenting with unique flavors, but have done them in very small batches and have only used them in cocktails served at The Rest. I will say this: Owning a cocktail bar and having the ability to use that as an “incubator” for this brand has been amazing! We initially wanted to launch with our own version of the two classic aromatics (Angostura & ), along with two citrus flavors. Black Walnut was one of our bartenders' favorites, and has also become a commonly-used flavor in the industry. We didn’t want to come out of the gates with really bold and different flavors that might be intimidating to people who didn’t know much about bitters. Sure, a seasoned bartender might really appreciate a bizarre flavor combination and know exactly how to use it, but would the average person who was looking to start building their own home bar? We decided to focus on launching with “the basics,” and then venture into more daring territory in 2017. 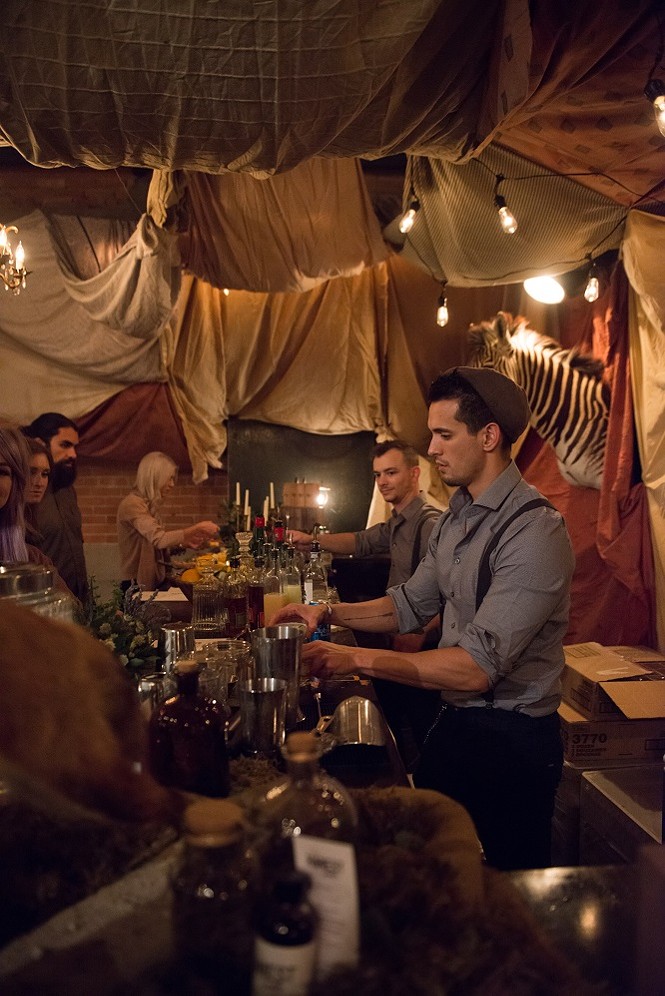 Tell us a little bit about all the flavors you currently have.

What was the launch party like, and how did the flavors go over with everyone?

Ohhhhh… the launch party. I’ll be sure to include some pictures from the event. It was beautiful. I loved it. We took over the Mandate Press, which is owned by my good friend Ben Webster. Mandate also our labels that we will be using for retail sales at The Rest, and also any purchases made through our website. I commissioned another good friend, Jake Buntjer, to help me curate the space for the event. Anyone who has been to The Rest is familiar with his work. I have been a fan of his for a while. We served Classic Cocktails and were serenaded by the band Book on Tapeworm for a few hours. It was magical, and just the tiniest bit odd … which is exactly what I prefer. We sold all but a few bottles that night, with the Grapefruit bitters being the crowds favorite.

For those interested in trying and buying, where can they currently find the product?

Anyone interested in getting their hands on a bottle can purchase it at The Rest, on our website, or locally at Caputo’s. We recently signed a deal with Caputo’s wholesale division, A Priori, as our distributor, so any wholesale inquiries can be directed to them.

Are you looking to add more flavors yet, or are you good with how things are for now?

We will most likely be introducing a new flavor in the first quarter. 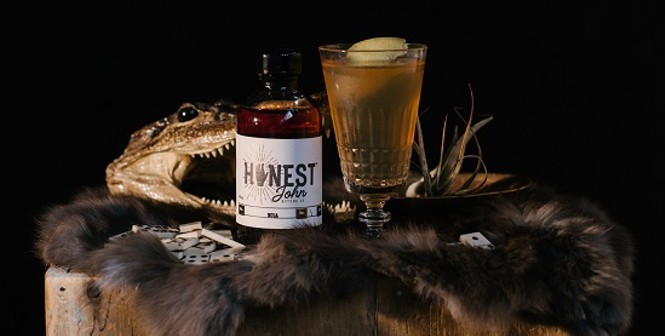 What can we expect from you and Honest John Bitters Co. the rest of the year?

It will be an exciting year for Bodega and The Rest as well as Honest John. The Rest is partnering up with Velour this year to put on a music series called Voices At {Rest}. Corey Fox and I have been talking about it for the last year, and have finally decided to do it! They will be silent shows (no talking during the sets) and provide a really small and intimate venue for 21+ fans to see some of their favorite local bands play, along with having a nice meal and imbibing while listening to beautiful music in a candlelit atmosphere. We experimented on NYE at The Rest with Timmy The Teeth … it blew my mind. It was so special.  Honest John Bitters will be hosting a series of events throughout the year to really focus on educating people on bitters and its many uses; they aren't just for cocktails. We just did a baking series with a beloved local pastry chef, Courtney McDowell. She developed five recipes using each of the five Honest John Flavors: Orange Coffee Cake with Cardamom and Coriander Streusel featuring Honest John Orange Bitters, Maple Cream Tart with a Black Walnut Crust, featuring Honest John Black Walnut Bitters, Grapefruit Cheesecake featuring Honest John Grapefruit Bitters, just to name a few. Everything was delicious! The recipes will soon be featured on our website, so those who don’t drink can also learn how to use the Honest John Product.

The first event of the year will be taking place on Jan. 19, called Whiskey + Winter at City Barbers (241 E. Broadway), 7-9 p.m. It is all complimentary. Honest John will be educating the crowd on the history of Bitters, and mixing up three classic whiskey cocktails for the guests, and Johnny and his crew will be offering beard trims. City Barbers is a beautiful space and one that we thought would be perfect to represent the brand. You will also be able to purchase Honest John products there in the near future. Stay tuned for more. We will be hosting an event or sharing a collaboration every quarter.