Khitam Zain Al Abdeen spoke in Arabic. She wore a lavender hijab. She stood at a lectern, as it were, as a lustrous example of the enriching contributions immigrants offer to their new homes and communities.

And in that vein, she also stood as the antithesis of the frightening boogeymen President Donald J. Trump’s attempted refugee ban purports to keep at bay.


Al Abdeen was one of the guest speakers at a March for refugee demonstration Saturday afternoon. Participants grouped outside the Federal Building then carried their banners and voices northward to the Utah State Capitol. 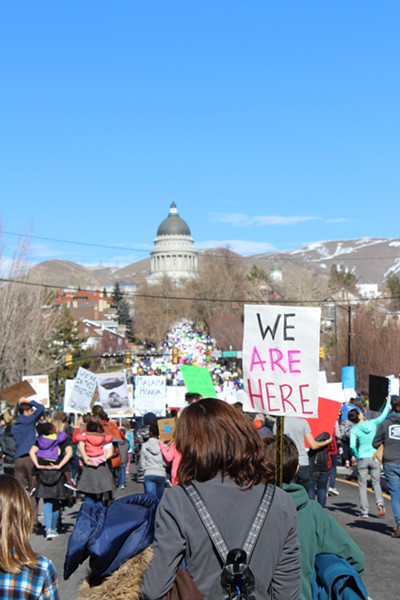 Utah Highway Patrol estimates between 7,000 to 8,000 supporters flocked into the Capitol quarters, eclipsing the record-breaking 6,000 estimated at an arresting Salt Lake City Women’s March on Jan. 23.


Al Abdeen, her husband and their four children fled Syria, a country entrenched in a horrific civil war where civilians have been brutally caught in the crossfire. Syria is one of seven Muslim-majority countries named in the president’s temporary refugee and immigrant ban.


The response to Trump’s executive order was immediate. Protesters rallied at airports nationwide, including Salt Lake City International. A federal judge in Seattle suspended the executive order, prompting Trump to tweet out: “The opinion of this so-called judge, which essentially takes law enforcement away from our country, is ridiculous and will be overturned!”


But the pro-immigrant momentum shown no sign of abatement. Saturday’s demonstration was a continuation of this movement.


Eight months ago, Al Abdeen’s family escaped from Syria, where the government had deployed chemical weapons on its own people. Had Trump’s ban been in place, she and her family would have been at the peril of a bellicose leader and rebel fighters.


“My children want to achieve their dreams here,” she said through an interpreter. “We want to be part of you, part of your society and we want to be able to contribute to this society, as well.”


“Thank you Utah for giving my life back to me and my family,” he said. Batar encouraged those in at the rally to write their representatives and let their opinions known. “Let’s not stop this movement. Let’s continue our fight. Let’s continue our struggle until we see refugees are coming to our state.”


A number of political leaders added their voices to the uproarious throng.


Fired up, Mayor Jackie Biskupski said Salt Lake City would work with the federal government but not at the expense of immigrants and refugees.


“You will always be welcome to the capital city of Utah,” she exclaimed. “We understand the concern and the fear. We know that you are nervous, but we are here to protect you, and we will protect you.”


Biskupski encouraged any refugee feeling threatened or vulnerable to call her office.


In addition to the speeches, Saturday’s event offered a diverse cultural exhibition.


Carl Moore, a member of the Native American advocacy group PANDOS, reminded the crowd, which spanned from staircase to staircase and all three floors, that everyone’s ancestors immigrated to this continent.


“You are all brothers and sisters,” he said.


Many more participated informally, such as a progressive clergy coalition. Rev. Curtis Price from First Baptist Church of Salt Lake City stood behind a banner before the march began with fellow religious leaders in the community.


“For us, this is a no-brainer issue for faith communities,” he said. “We cannot claim Christ and be in favor of banning refugees. It’s really that simple. Reams and reams of scripture speak to the fact that Jesus was a refugee, we are commanded to welcome the stranger because we were strangers ourselves in Egypt, and we were delivered by a just God.”