Chatting with the SLC comedian before her Feb. 18 show.

Local comedy showcases continue to pop up in venues that aren't the traditional setting. Ice Haus, Urban Lounge, Sky Lounge, the U of U and more have started seeing many more independent shows emerge thanks to the efforts of local comedians. This month at Sky Lounge on Feb. 18 will feature a comedy lineup including Matt Turner, Mina Thorkel, Jordan Ferguson, Mark Christopher Lawrence, Dustin Hagen, The Fatman and today's interview subject, Elizabeth Church. We chat with her about her career and her thoughts on the local scene. (All pictures provided of Facebook.)

Gavin: Hey Elizabeth! First thing, tell us a bit about yourself.

Elizabeth: I am a full-time mom of three amazing boys. I am a part time waitress, as well as writing, performing and producing comedy shows. I am also a massage therapist/injury specialist and a graduate from UCMT.

When did you first take an interest in comedy, and who did you like watching growing up?

I have always been a fan of standup comedians. Some of my favorite comedians and who inspired me are Rob Schneider, David Spade, Louis CK, Nick Swardson and Amy Schumer. They have all had a huge influence on me and made me want to try standup myself, so about five years ago I decided to do my first open mic. 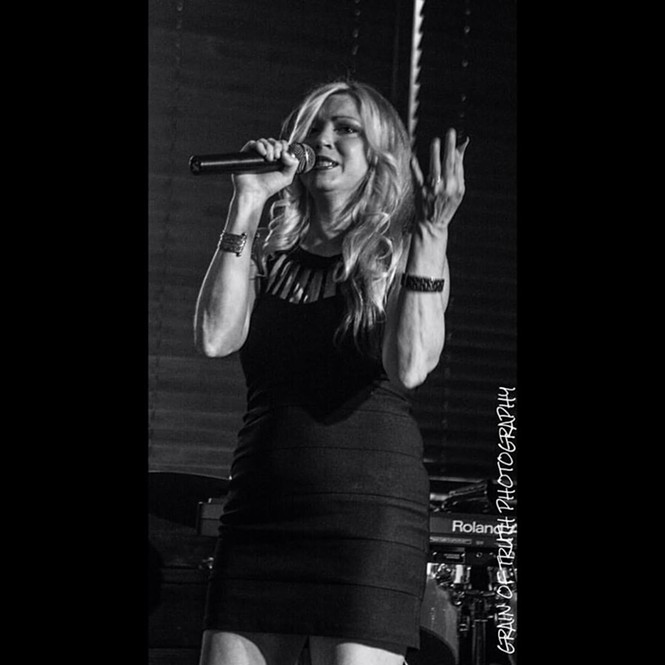 Prior to being in Utah, you were living in Las Vegas. What brought you out here and how have you enjoyed living here?

Yes, I moved from Las Vegas to Utah to go to massage therapy school. I was a single mom at the time, so I moved here to be closer to my family. At first, it was a little hard to adjust, since Vegas and Utah are almost like different worlds. However, over time I have begun to love living here, and there are many amazing and talented people here, plus the mountains and nature here are breathtaking.

What made you decide to take a chance and try standup comedy yourself?

When I lived in Las Vegas, I worked for Paramount Parks at a themed restaurant called Star Trek: The Experience. One of the actors who played a Klingon was Mark Weitz. After it closed down, he started standup comedy; he now goes by the name Alien Warrior Comedian. I sent him a couple jokes and he strongly encouraged me to try my first open mic. Without him giving me that little push I needed to try it, I am not sure that I ever would have tried it when I did.

How was it for you breaking into the open mics and getting gigs?

Most of all the shows that I have been on were because the producers of comedy shows saw me perform at an open mic. Open mics gave me the confidence I needed and helped me to grow as a comedian through all the awkward stages that one must go through in order to develop timing/rhythm when writing jokes, and developing stage presence that comes with practice.

I learned to have enough material in order to adjust my jokes according to the crowd, which has to do with learning how to read the audience. I think that is something that I will always be working on and developing. I also learned to slow way down when speaking and to talk to the audience, not at the audience. Also, having confidence in myself and my material is very important, because if a comedian does not have those things, I believe the audience can sense that and it could potentially affect the comedy set in a negative way.

As far as coming up with the material, I am more of a joke writer instead of a funny storyteller, which I think most comedians have that style of standup. I usually just have something silly pop in my head and I write down the premise and work on it until the wording is right. I like to make my set flow the best I can, by putting three to four jokes within the set with the same theme and then another three or four jokes with another common theme, and so on. I also like to build my material little by little year after year.

How has it been for you getting to know other local comedians and working in our scene?

There are so many talented comedians here in Utah, some of the best on the planet. Steve is a very talented headliner who produces comedy shows, mostly in Las Vegas. He asked me to do my first set that was on an actual show instead of an open mic; that was so exciting, and I have been performing on comedy shows on a regular basis since then. I learned a lot about how to produce my own shows through him and other local comedians who produce shows. I am very grateful for all the opportunities that other comedians have given me, and I love creating opportunities for comedians through producing shows.

What's it been like for you as a performer rising up through the ranks and getting noticed?

Well, I put a lot of hours into writing and rehearsing and test driving jokes at open mics. Comedy is kind of like an internship, you have to invest a lot of time and energy and you have to learn to feel as comfortable as you can as an entertainer being out of your comfort zone, and take a lot of risks before you can see the results and before opportunities present themselves. It just feels so amazing when all the hard work pays off and I get to be a part of amazing comedy shows. It's such a high, there is nothing else like it. I will always be addicted to that feeling and will continue to pursue standup comedy.

You've got a big show coming up at the Sky Lounge in a few weeks. Tell us about the show.

I am really excited to be on this show and in this hilarious lineup. The very funny Aaron Westly will be producing this and perform in the show. There are headlining comedians from all over the nation combined with local comedians on Feb. 18. This is going to be a great show!

What's your take on our standup scene and the work coming out of it?

There are some very talented comedians here in Utah. I just think that not enough people are producing comedy shows, and I think for as big as a city as Salt Lake City is, there is a shortage of comedy clubs. It would be nice to see more of that going on, to help build a bigger comedy scene here in Utah.

I am excited to be performing on the upcoming show at the Sky Lounge with all of the hilarious comedians. Some of them include the very funny Mark Christopher Lawrence, Matt Tuner and Aaron Westly. I also look forward to hearing the comedy of Jackson Richard Banks and Jeremy Anderson, and all of the talented comedians that will be on my upcoming Elizabeth Church Comedy Productions comedy show on Feb 10 at the Wicked Pour House. Other local comedians that I find to be very talented and hilarious are Jeffery Watson, Natashia Mower and Travis Tate.

What's your take on the current club along the Wasatch Front?

The comedy clubs and shows are all amazing and well put together around town. But once again, I I just don't think that there are enough comedy clubs/shows, therefore not as many opportunities for upcoming comedians and headliners traveling through SLC who are looking for stage time.

Some of the very best shows that I have produced have had headliners when combined with local headlining comedians. It's the perfect recipe for a good show and a great time for the comedians and the audience. This definitely helps to strengthen the comedy scene and get more people out to enjoy themselves through the magic of laughter and comedy.

Being a comedian means bringing together a room full of strangers through laughter, and distracting people from their problems that life can bring. Not that many people on this planet have the ability or the skills to do this, the world needs more people bringing laughter to others, so if a person has this ability, they should pour all the energy and time into performing stand up. The reason comedians continue to do shows time and time again is because it is an extremely rewarding and gratifying feeling that performing standup comedy can bring, in my opinion.

I have an upcoming Comedy Productions show on Feb 10 at the Wicked Pour House, all the information is on my Facebook page. I plan on continuing producing a monthly show, I also will be performing at the Sky Lounge Feb 18. In March, I have a very exciting show that I have asked to be interviewed will be performing a five-minute set on the Mr. Caffeine Show with celebrity guests. I will have the rest of the details and the info for that show soon on Facebook, plus it will be aired on YouTube. In the past four months I have been on two podcasts and two radio shows, I want to continue to be a guest on more radio and will continue to work hard in order to do that.